William Lambers is the author of Nuclear Weapons, The Road to Peace, and Ending World Hunger. His writings have been published by the USA Today, Washington Post, Baltimore Sun, History News Network and many other news outlets. 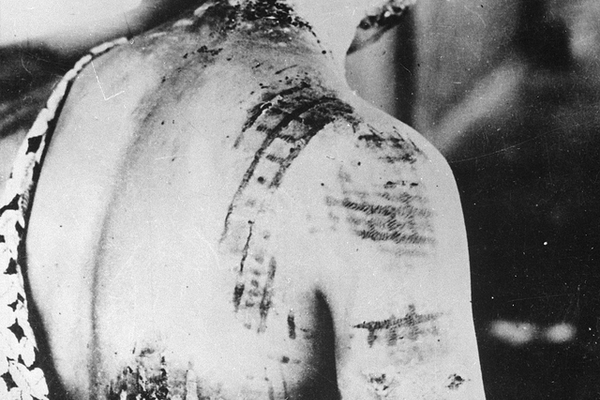 Miyoko Matsubara of Japan came to the United States in 1962 on a mission. She wanted to stop nuclear weapons testing. As a child Miyoko had survived the atomic bombing of Hiroshima on August 6, 1945.
The United States dropped atomic bombs on two Japanese cities, Hiroshima and Nagasaki, which brought an end to World War II. On the 75th anniversary of the only time nuclear weapons have been used in war, we should listen to Miyoko's story.
Miyoko and her friends had seen a plane flying over Hiroshima that fateful morning. Suddenly there was a massive flash and Miyoko dropped to the ground to take cover. She was knocked unconscious by the explosion of the atomic bomb.
When Miyoko awoke, it was like morning had turned to night. Her friends were gone and some were blown up as she described it. Miyoko's clothes were burnt and her skin was hanging off. She jumped into a nearby river because of the intense heat. She found some of her friends in the water in much worse condition.
Around 80,000 people were killed instantly by the Hiroshima atomic bomb and thousands more in the aftermath.  Miyoko survived the blast.  She wanted so desperately to go home and escape this living nightmare, but would suffer from the severe burns and injuries for months to come.
Miyoko's nightmare, in a sense, would go on the rest of her life. The trauma of World War II and the atomic bomb made her become an advocate for peace. As Miyoko would say "The real enemy, therefore, is not America. It is war and nuclear weapons. Those weapons must be abolished."
No one should ever again experience the horror of nuclear warfare. That is why she traveled to the United States during the Cold War to end nuclear weapons testing.
The U.S. and the Soviet Union were testing nuclear bombs at an alarming rate.  Efforts to achieve a nuclear test ban treaty had been started by President Dwight Eisenhower and carried on by his successor John F. Kennedy. But negotiations had reached a deadlock. The danger of nuclear weapons and testing became even worse.
Miyoko, along with another Hiroshima survivor Hiromasa Hamabusa, appealed to America’s conscience to stop nuclear testing and work toward eliminating the weapons. She warned of the horror of atomic war. Not long after her visit the unthinkable almost happened.  The Cuban Missile Crisis brought the U.S. and Soviets to the brink of a nuclear war in October of 1962.
After the crisis, Miyoko’s message of peace gained more support.  She no doubt played a role in the worldwide public outcry that encouraged the U.S and Soviets to achieve the Limited Nuclear Test Ban Treaty. This 1963 treaty banned nuclear tests in the atmosphere, underwater and outer space.  Underground tests continued.
To this day, a treaty banning all types of nuclear testing has yet to take effect. Miyoko, who has now passed on, would want us to continue the fight.
David Krieger of the Nuclear Age Peace Foundation wrote of Miyoko, "like so many other survivors of the Hiroshima and Nagasaki bombings, she was traumatized by the experience and wanted to assure that no other people or cities suffered the trauma and tragedy that she and her city had.”
75 years after the horror of World War II, which culminated in the atomic bombings on Hiroshima and Nagasaki, the U.S. and Japan must remain dedicated to peace.
The U.S. Senate could achieve one of Miyoko’s dreams by ratifying the Comprehensive Nuclear Test Ban Treaty, which bans all nuclear test explosions. The treaty has been prevented from taking effect because the United States and seven other nations (China, Israel, Egypt, India, Pakistan, Iran and North Korea) have yet to ratify it.
President Trump, despite his party controlling the Senate, has not even tried to ratify the treaty. Instead President Trump is considering new nuclear tests according to a Washington Post report. Nuclear arms control and disarmament efforts remain stalled. There are still 14,000 nuclear weapons in the world today according to the Arms Control Association.
The United States must lead the way in ratifying the treaty and getting  other rations to join. Ending nuclear tests is a critical step toward eliminating the weapons. As President Ronald Reagan once said “We seek the total elimination one day of nuclear weapons from the face of the Earth.”
We must rededicate ourselves to nuclear arms control and disarmament as we mark the 75th anniversary of the atomic bombings of Hiroshima and Nagasaki.
comments powered by Disqus