The Other Western Front

Aimee Liu is the author of the new novel Glorious Boy, as well as the historical novels Flash House, Cloud Mountain, and Face and many works of nonfiction. More at aimeeliu.net 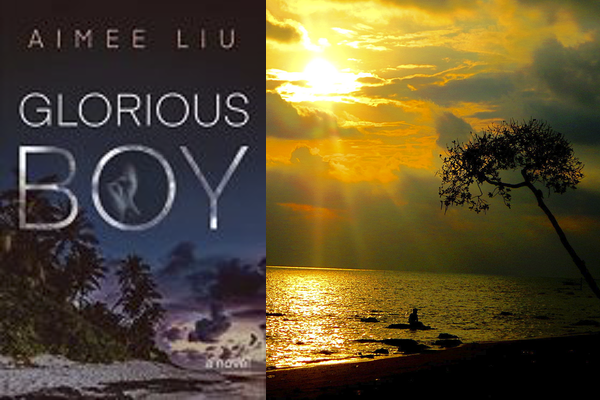 As a historical novelist, I long ago learned that there’s no virtual substitute for smelling, tasting, and walking the physical ground where a story takes place. But the material details I gleaned during the research trip for my new novel Glorious Boy did much more than enrich my plot. They transformed it.

Until I visited the Andaman Islands in 2010, I didn’t even realize that my setting had played a role in World War II, much less that this remote archipelago in the Bay of Bengal marked the western front of the Pacific Theater.

By then I’d been working on Glorious Boy for several years, but never as a WWII story. My fascination with the Andamans had been sparked by an anthropologist who told me about the tribes that had migrated from Africa to these islands off the coast of Myanmar more than 60,000 years ago. Those indigenous Andamanese had thrived until the late 1800s, when the British chose to locate a penal colony, Port Blair, on Middle Andaman Island. Their prisoners were Indian rebels against the Raj. The diseases introduced by these foreigners decimated most of the tribes.

In 2003 the Andamans invaded my dreams. I envisioned a local girl hiding with a little white boy whose parents were being evacuated. When the children emerged, the parents were gone, the road deserted. Smoke rose over the distant palm trees. I woke in a cold sweat, knowing I had a story that demanded to be told.

The problem was, I had no idea if or when the Andamans ever had been evacuated. The little information then available in America focused on the islands’ flora, fauna, and tourist beaches. India’s current Government was promoting the Andamans as a tropical utopia. To find out what life had been like when Port Blair was still a penal colony, I needed to go to the source.

Upon arriving in Port Blair, one of the first things I noticed, apart from the undulating green of the forests, the brilliance of the sea, and the sweltering humidity, were the blood red bunkers that punctuated the beaches in every direction. Japanese forces, I soon learned, had occupied the Andamans from 1942 until the end of the war. They’d made their headquarters Ross Island, the erstwhile British cantonment.

It was the day I spent on that little island that recast my novel as a war story.

“Ross,” as the locals call it, is a 30-acre ridge that stretches across the mouth of Port Blair’s main harbor. Today it serves as a natural museum. The cantonment parade ground, graveyard, pond, and swimming pool remain much as the British left them. But the officers’ quarters, church and colonial clubs, bungalows, barracks, bakery, and hospital were all dismantled later in the war, their bricks and hardware repurposed for Japanese military use. Only foundations and a few structural walls remain, now webbed with the roots of towering ficus trees. These ruins seem at once immense and lost – a fitting reflection of Port Blair’s colonial past.

As I wandered among the relics I was transfixed by the palpable sense of cultures colliding. Then I discovered the materials in the Ross bookshop – volumes, maps, and pamphlets available nowhere else.

One book, The Lost Horizon, offered first-hand accounts that brought to life the tension between Port Blair’s Indian convicts and British officials in the waning days of Empire. United by their quest for independence, the Indian freedom fighters had cheered for each Japanese victory as the war progressed. They believed the enemy’s pledge of “Asia for the Asians” and expected the occupiers to deliver the Andamans to “home rule.”

I turned the pages and suddenly found myself reading about the evacuation I’d dreamed.

On March 13, 1942, all civilian foreigners and their families sailed from Port Blair for Calcutta. Rangoon had fallen just five days earlier, and the scene on the jetty was one of pandemonium. “Local borns” were ordered to remain, along with a handful of British officers and Indian troops waiting for a second evacuation ship. Nine days later, Chief Commissioner C.F. Waterfall surrendered the islands without a shot.

All the European officials save one were shipped off to POW camps or publicly executed in Port Blair. The dramatic exception was Police Chief Denis McCarthy.

As soon as he’d learned that the second evacuation ship was torpedoed en route, McCarthy had commandeered a motor launch and set off with a local crew for Madras (now Chennai), 850 miles away. He got out just a couple of days before the Japanese landed. The Bay of Bengal was crawling with sharks and enemy subs, but against all odds, the launch made it.

Six months later, McCarthy was tapped by the Special Operations Executive to return.

Now the story unfolding before me included espionage.

Under the codename Operation Baldhead, a submarine deposited McCarthy’s team on North Andaman Island on January 18, 1943. McCarthy and two others then traveled by kayak and on foot down the center of the archipelago. The rain forest was practically impenetrable, infested with leeches, vipers, and poisonous insects, and home to the hostile Jarawa tribe, but again McCarthy beat the odds. He reached a village where he knew the headman, a former convict, and made him his informant.

McCarthy also tapped an even less likely agent. According to The Lost Horizon, “An Andamanese tribal Leuka who loitered about like a simpleton with blank looks worked as a contact man and informer for the British.” I hunted in the other materials for more about this man, also known as Loka, who turned out to be the chief of one of the friendlier forest tribes. Far from a simpleton, Loka was an acute observer whose dark skin and “uncivilized” appearance allowed him to travel with impunity, since both the Japanese and Indians dismissed the indigenous people as less than human. As the character based on McCarthy marvels in my novel, Loka was “the perfect spy.”

Meanwhile, desperate to root out the spies, the occupation launched a “reign of terror” in Port Blair. Anyone who’d ever associated with the British was rounded up. Former police, soldiers, teachers, even leaders of the Indian Independence Movement were tortured and killed. By the end of the war the local population was reduced by about 75 percent. Yet the true spies remained invisible.

The Andamans were among the last territories surrendered by the Japanese. The first Allied mercy ship didn’t reach the islands until September 1945, and reoccupation forces didn’t land until October 8, two months after VJ Day. The next morning, at the official ceremony of surrender, Loka, “King of the Great Andamanese tribe” was honored for his service to the crown.

By the time I boarded the plane for home, Glorious Boy’s new course was set. The children of my dream might be fictional, but they would witness history and befriend characters modeled on the Andamans’ unsung heroes. I felt as if my novel had just been waiting for me to come to these extraordinary islands and claim it.