The Headless Horseman: William Barr and the Attorney General in History (Part 2) 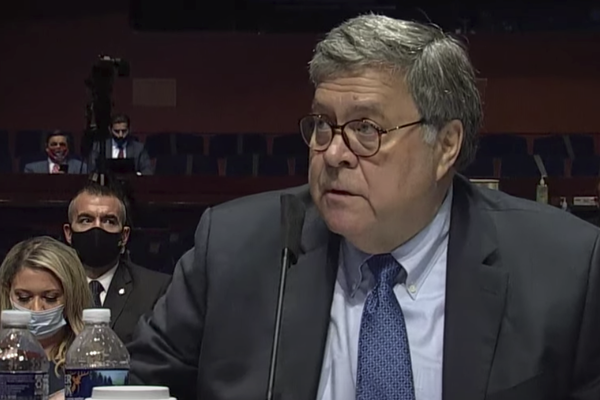 To read Part 1 of this article, go here.

None of the founders of the country conceivably imagined that if the Attorney General is indeed the creature of the President, he would be ill-equipped to investigate, much less prosecute the President or his associates for wrongdoing, either before or during his presidency. It obviously didn’t occur to Hamilton, Madison or Jay that we might one day have a rogue President like Donald Trump with a life history of being one step ahead of the law, and little or no regard for presidential or constitutional norms.

Barr enjoys the dubious decision of being the most controversial Attorney General in history. He testified in his confirmation hearings that he would make law enforcement decisions based on the facts and the law “not on politics.” But, he quickly broke his promise and emerged as a political apparatchik, leaving a trail of decisions favorable to Trump and his political cronies that appear to have ignored both the facts and the law, and raise serious questions as to whether he has any independence from the President at all. Indeed, Barr not only embraced, but bedded down with, the controversial doctrine of the unitary executive. In a devastating Washington Postop-ed, Obama Attorney General Eric Holder found Barr “unfit” to hold the office because he failed to distance himself from the President:

Barr made the outlandish suggestion that Congress cannot entrust anyone but the President himself to execute the law. In Barr’s view, sharing executive power with anyone ‘beyond the control of the President,’ [emphasis Holder’s]… presumably including a semi-independent Cabinet member’ [the Attorney General], contravenes the Framers’ clear intent to vest that power in a single person.’ This is a stunning declaration … revealing of Barr’s own intent: to serve not at a careful remove from politics, as his office demands, but as an instrument of politics — under the direct “control” of President Trump.

Barr’s interpretation of the office is totally at odds with that expressed by Cushing or, for that matter, any of his illustrious predecessors.

Barr had briefly served as George H.W. Bush’s Attorney general from 1991 to 1993. The only blemish on his reputation was the tragic Ruby Ridge massacre in which a woman, a 14-year old boy and a dog were killed by federal snipers while  Barr was at the helm of the Justice Department. Barr successfully distanced himself from the tragedy, and the incident did not figure in his confirmation hearings.

When Barr was appointed by Donald Trump, people in the legal community regarded him as a reasonable guy, a moderate Republican, a lawyer who understood his constitutional duties. In Barr, Trump found his Roy Cohn, a cunning advocate and protector of his political flank. Barr got his job because months before his appointment, he wrote a letter to Deputy Attorney General Rod Rosenstein, contending that the Mueller probe could not “provide a legitimate basis for interrogating the President,” because “the President alone constitutes the Executive branch,” has  “all-encompassing” authority over federal law enforcement and cannot commit obstruction of justice even by firing an official, such as James Comey or Preet Bharara, directing an investigation into presidential misconduct.”

Since assuming office, Barr has gone so far as to state that the Russia probe was “one of  the greatest travesties in American history,” manufactured  “without any basis…to sabotage the presidency.” The Justice Department inspector general concluded otherwise. He said the investigation was justified and accomplished without bias. Notwithstanding, Barr deputized Connecticut federal prosecutor John Durham to look into the matter. This fit neatly well with Trump’s debunked “Obamagate” scenario that Obama and his Vice President Joe Biden ginned up the Russia probe to discredit his presidency. Durham’s findings may result in the fantasy of the hard right, an indictment of James Comey or a report strategically timed for October, amidst the run-up to the November election.

Barr told the Senate Judiciary Committee that “nothing could be more destructive of our system of government …than any toleration of political interference with the enforcement of the law.” He lied. On June 24, two career prosecutors told the House Judiciary Committee that Barr had done precisely that. John Elias, a 14-year veteran of the Department of Justice whose motives Republican Congressmen were quick to impugn, testified that Barr had ordered the antitrust division to investigate mergers in the legalized marijuana industry simply because Barr “did not like the nature of their underlying business.” “Personal dislike of the industry is not a valid basis upon which to ground an antitrust investigation,” Elias testified.

Aaron Zelinsky, lead prosecutor in the case of Roger Stone, the longtime “dirty tricks” political fixer for Donald Trump, declared that political pressure accounted for Barr’s Justice Department’s cutting a break for Stone. A jury had  convicted Stone after trial of seven counts of felony witness tampering and perjury before Congress. Line prosecutors had recommended a sentence of seven to nine years in prison in accordance with sentencing guidelines. Barr countermanded the recommendation in accordance with Trump’s wishes.

The government filed a new sentencing memorandum, without a prosecutor’s signature, seeking a sentence that was a downward departure from the guidelines. The court sentenced Stone to three years in prison, a sentence which Trump commuted just as Stone was about to enter prison. Zelinsky and the three other career prosecutors on Mueller’s team, who represented the government at trial, withdrew from the case in protest or else resigned from the Justice Department.

At least in Stone’s case, Barr’s Justice Department sought some reduced jail time. Witness tampering is still a serious offense. But in the case of Michael Flynn, another Trump crony, Barr moved for leave of court to scupper Flynn’s sentencing, and dismiss the case altogether after Flynn had twice pleaded guilty to lying to the FBI. Other career prosecutors resigned over the move. In an extraordinary brief filed in court, Barr contended that even assuming, for sake of the argument, that he acted out of improper political motive or “gross abuse” in moving to dismiss the case, his action was  “an unreviewable exercise of prosecutorial discretion.” A panel of the D.C. Circuit upheld Barr’s position and dismissed the case by a 2-1 vote. Further litigation on this issue is ongoing.

Jonathan Kravis, one of the federal prosecutors who resigned from the Justice Department because of being overruled in the Stone case, wrote an op ed in the Washington Post in which he argued that both Stone’s and Flynn’s cases “the department undercut the work of career employees to protect an ally of the president, an abdication of the commitment to equal justice under the law.” “Prosecutors must make decisions based on facts and law, not on the defendant’s political connections,” Kravis wrote. “When the department takes steps that it would never take in any other case to protect an ally of the president, it betrays this principle.” Zelinsky told Congress that Barr’s actions were “because of politics,” “virtually unprecedented” and “unheard of.” In the United States of America, we…don’t cut [people]..a break because of politics, ” he testified.

No Attorney General has gone so far as Barr in using the office to twist the law to protect the President politically. He perverted the findings of the Mueller Report into an exoneration of the President. He swept under the rug whistleblower allegations that Trump had sought to hold hostage millions in appropriated military aid to Ukraine in exchange for the “favor” of Ukraine’s announcing an investigation of Democrats for supposed wrongdoing. The Democrats included his political rival Joe Biden. The case bristled with evidence of attempted bribery and extortion, but Barr, closing his eyes to the obvious, saw nothing criminal in it.

Some lawyers have the courage of their retainers. Barr has proven to be Trump’s handmaiden. He intervened in behalf of the United States in the subpoena cases in which congressional committees and New York District Attorney Cy Vance in behalf of a grand jury sought Trump’s tax returns and other financial records covering years and conduct before he even took office. He lost the case before every court that considered it, including the Supreme Court.

Wearing his secret police cap, he directed the federal officers who launched an unprovoked pepper spray attack on Washington demonstrators, exercising their constitutional right of assembly, to clear the way so Trump could pose for a political photo op in front of a Lafayette Square church. By executive order, he vengefully sought a broad overhaul of the legal shield protecting the social media when Twitter tried to rein in his misleading and inciting-to-violence tweets.

He commenced suit against former national security adviser John Bolton to enjoin publication of Bolton’s tell-all book entitled The Room Where It Happened, making blunderbuss claims that publication would breach national security. The suit was an obvious tactical ploy to delay the book until after the 2020 election. The suit made no sense for Trump, and any lawyer worth his salt would have refused to file it. The Room Where It Happened immediately soared to the top of Amazon’s best seller list for many of the same reasons that  steamy movies used to attract crowds if they were “banned in Boston.” Sensationalism, like sex, sells. In any event, bootleg copies of the book leaked out to the media, rendering any injunction moot. As the judge said, “the train has left the station.”

Donald Ayer, a deputy attorney general in the first Bush administration called Barr “the greatest threat in my lifetime to our rule of law and to public trust in it.” Quite an indictment coming from a former colleague.

More will undoubtedly unfold about the complicated character of William Barr beyond the damning evidence of his conflicting loyalties, which are at this point so well-known. More than 2,000 former federal Justice Department employees, including federal prosecutors, have called on Barr to resign, and for Congress to censure him for his “repeated assaults on the rule of law.”

Engraved on the west pediment above the entrance to the Supreme Court building in Washington is the aspirational legend EQUAL JUSTICE UNDER LAW. But the promise of “equal justice” turns decidedly on an adversarial system with an independent Attorney General unblemished by political considerations.

As the story goes, Benjamin Franklin was walking out of Independence Hall after the Constitutional Convention in 1787, when someone shouted out, “Doctor, what have we got? A republic or a monarchy?” To which Franklin supposedly responded ominously: “A republic, if you can keep it.”