"Elvis In The Box": The National Enquirer Issue that Made Today's Celebrity Culture

Michael Nelson is the Fulmer Professor of Political Science at Rhodes College and a senior fellow at the University of Virginia’s Miller Center.  His books include Resilient American: Electing Nixon in 1968, Channeling Dissent, and Dividing Government, which won the American Political Science Association’s Richard E. Neustadt Award for best book on the American presidency in 2015, and How the South Joined the Gambling Nation: The Politics of State Policy Innovation, which won the Southern Political Science Association’s V.O. Key award for best book on southern politics in 2009. 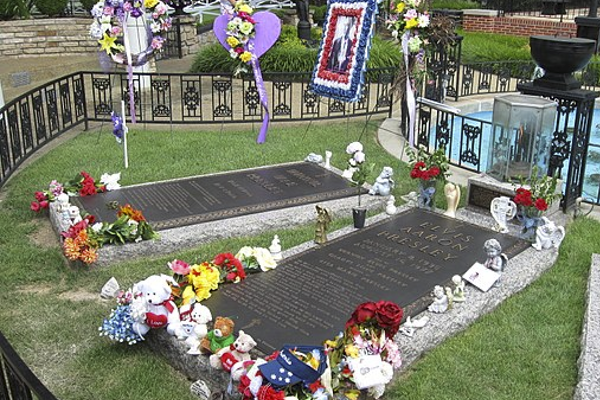 Admit it, fellow boomers, you looked.  How could you not?

You were on the slow-moving checkout line at the grocery store, stalled by a complicated series of price checks involving the customer in front of you.  Your kids were transfixed by the candy rack.  “Just one apiece,” you finally said, surrendering to their whining while maintaining the pretense of laying down a tough line.

Besides, it was the eye candy, not the Gummy Bears, that had your attention.  There it was, right next to the cash register: the front page of the National Enquirer.

“Ed McMahon Flies into Rage over Fiancee’s Secret Past of Men, Men, Men!,” it shouted.

Or: “Vanna and Kathie Lee Square Off in Vicious Feud over Who’s Most Beautiful.”  Or even: “New White House Cat Faces Nervous Breakdown—the Untold Story.”

Unless, that is, the headline blared: “Elvis: The Untold Story,” as it did on September 6, 1977, 43 years ago this week.  Even more compelling, the cover photo was of Elvis’s corpse in an open coffin, an astonishing shot known ever after as “Elvis in the Box.”

Don’t feel bad for buying that one.  I did.  More than six-and-a-half million of our fellow Americans did too.

The National Enquirer has fallen on hard times in recent years, the victim of its own success.  It’s been overshadowed by everything it spawned: competing supermarket tabloids, People magazine, E!, TMZ, and a mainstream media that has become ever more besotted by celebrity and scandal.

The Enquirer’s most recent chief executive, David J. Pecker, best known for buying and burying former Playboy model Karen McDougal’s account of her affair with Donald Trump as a favor to the candidate in 2016, was just fired.  Weekly circulation has dropped to about 265,000, down more than 95% from its peak. Just last week the paper’s long-expected sale to James Cohen, the CEO of airport chain Hudson News, fell through.

But that’s now; this was then.  The story of the Elvis in the Box cover might well be subtitled: The Week the National Enquirer Came to Memphis.

By 1977 the Enquirer had outgrown its “Kills Pal & Eats Pieces of His Flesh” and “I Cut out Her Heart and Stomped on It” days.  Sure, it still featured aliens, quack diets, and mystics, but what founder-editor Generoso Pope Jr. discovered was that celebrity stories drove circulation, largely by enabling the paper to move from old-style street corner urban newsstands to new-style suburban check-out lines.

“We love to feel part of this lifestyle—the privilege, the money, the mansions,” wrote former editor Steve Coz in “The National Enquirer: Thirty Years of Unforgettable Images.”

“At the same time we want to know that there is a price, that after the glory comes the fall, the drugs, the scandals, the divorce, the murder.”  Then after a while “we feel guilty for wanting to see the famous fall, and when they do, we most often want to see them rise back up to new heights of glamour and fame.”

Pope paid his writers, many of whom he imported from British or Australian tabloids, lavishly but on one condition, notes New York Times Magazine staff writer Jonathan Mahler in his conclusion to the same volume:  they must be willing to do anything it took—anything—to “deliver high-octane scoops. If that meant digging through Henry Kissinger’s trash” or “dressing up as a llama to infiltrate a herd near the site of Michael J. Fox’s wedding, then so be it.”

At age 42 Elvis’s star was waning.  Recent Elvis covers hadn’t done much for Enquirer sales.  “He weighed a ton and a half and he looked like shit,” said articles editor Tom Kuncl.  But Pope sensed that the public, having moved two-thirds of the way through its cycle of first idolizing, then despising, and then resurrecting stars, was primed to explode in adoration when Elvis unexpectedly died.

As soon as Elvis’s death was announced in August 1977, Pope chartered a Lear jet to relay teams of reporters from the Enquirer’s Lantana, Florida, headquarters to Memphis, where they rented an entire floor of a Holiday Inn, had dozens of secure phone lines installed, and hired scores of local writers, photographers, and private detectives to help pursue the story.

Their pockets stuffed with tens of thousands of dollars in cash, the Enquirer team grabbed everyone it could find who had any connection at all to Elvis or his death and was willing to sell their stories.  Among those they rounded up were current girlfriend Ginger Alden, stepmother Dee Presley, Uncle Vernon, even the paramedics who tended Elvis on the ambulance ride from Graceland to Baptist Hospital.  Their exclusive stories bought and paid for, they were whisked off to Lantana to keep them from talking to anyone else.

When Memphis newspapers and television stations sniffed disapprovingly in print and on the air that the Enquirer had stooped to paying sources, Memphians with their own Elvis stories headed straight for the Holiday Inn.

“Our photo desk had one major imperative,” writes another former editor, Iain Calder, in The Untold Story: My 20 Years Running the National Enquirer.

“Get a photo of Elvis in his coffin.”

But how? Elvis’s “Memphis Mafia” of friends, retainers and relations were eagle-eyed guardians of the coffin as thousands of fans filed through Graceland’s foyer to pay their respects.

“I bought every Minox [spy] camera in a three-state area,” says Kuncl, but “people just chickened out” when they caught sight of “Red and Sonny West standing there ready to kick the shit out of anyone who tried to take a picture.”

Enquirer photographer Jimmy Rutherford finally found a distant cousin of Elvis’s who was willing to sneak in after dark.  He got off four quick shots, and the film was rushed back to Lantana to be developed.

As recounted by Calder, here’s what emerged in the darkroom.

“Frame one: The cousin’s blurry face. He had pointed the camera at himself.

“Frame two: A picture of the chandelier hanging above the coffin.

“Frame four: Who cared after frame three, but it was another good picture, taken from the side of the casket, showing Elvis in profile.”

The demand for the Enquirer’s Elvis in the Box issue was so great that Pope wanted to print 8 million copies instead of the record 6.7 million the Enquirer actually sold, but he couldn’t find printers with enough paper to pull it off.  Issues became collector’s items—you can still find them all over eBay.

And so began “Elvis’s elevation”—more than four decades long this month (yes, Elvis would be 85 if he’d lived) and still going strong.  He went “from a fat, fading celebrity to a beloved nationally, and eventually worldwide, fetish,” notes journalism professor Jack Vitek in The Godfather of Tabloid: Generoso Pope Jr. and the National Enquirer.

Vitek, Calder, Coz, and Mahler have all written marvelous nonfiction accounts of Elvis in the Box, but my favorite version is comic crime novelist Donald E. Westlake’s Trust Me on This.

After a cousin from the dead singer’s “teeming and scrofulous family” delivers the photo, Sara, the lead reporter, asks editor Jack Ingersoll, why it’s such a big deal.

“’Because America wants it . . .,’ Jack told her. ‘Never mind pictures of the guy at the White House, pictures of him dancing, laughing, eating pizza. What America wants is the dead body, on its back, hands folded over shriveled balls, eyes sewed shut, eyelids with that special caved-in look, puffy silk casket lining all around.’”

“’Sara,’ Jack said mildly. ’Who do you think our readership is?  The senior class at MIT?’”

No, just me and maybe you and everyone else on the check-out line at the grocery store 43 years ago this week.