Shannon Bontrager is Professor of History at Georgia Highlands College, a Mellon/ACLS fellow, and author of Death at the Edges of Empire: Fallen Soldiers, Cultural Memory, and the Making of an American Nation, 1863-1921. 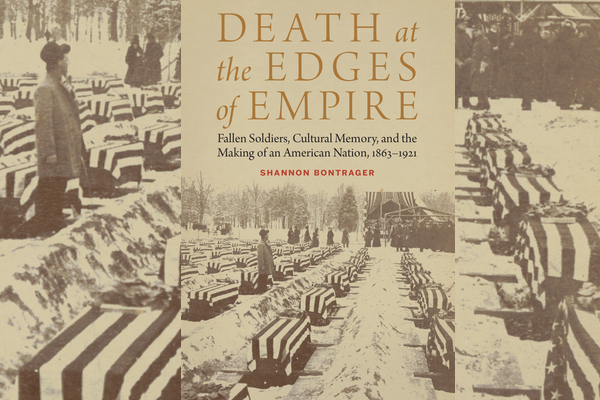 “Why should I go to that cemetery? Its filled with losers,” President Donald Trump reportedly stated when justifying his unwillingness to visit the American war dead at the Aisne-Marne American cemetery in France. The cemetery commemorates soldiers from the First World War, many of whom died at the nearby battlefield at Belleau Wood. Mr. Trump’s supporters who attended the President’s trip to France in 2018, including current White House staffers, denied that the Commander-in-Chief of the U.S. military made such utterances. Jeffrey Goldberg, Editor-in-Chief of The Atlanticand author of the article, quotes four anonymous sources “with firsthand knowledge of the discussion that day.”  President Trump had denigrated American soldiers, veterans, and their families before and during his presidency including Senator John McCain, who died from cancer in 2018 and was a prisoner of war for over 5 years after his Navy plane was shot down over North Vietnam. Mr. Trump was accused of being disrespectful to Khizer Khan, a Gold Star Father, whose Muslim son, Captain Humayun Khan, died heroically protecting his fellow soldiers from a suicide attack in which he was posthumously awarded the Bronze Star and Purple Heart medals.

Critics of the President refer to these moments to suggest that Donald Trump is unfit to be Commander-in-Chief while the President’s supporters use them to suggest that the media and liberals maliciously distort and lie about Mr. Trump to undermine his reelection bid. The controversy persists because the 2020 presidential election between Donald Trump and Joe Biden is taking place within the context of a war over American memory. President Abraham Lincoln crystalized American cultural memory when he dedicated the cemetery at Gettysburg in November 1863. Lincoln summoned the loss and grief of hundreds of thousands of Americans and harnessed their mourning to the bodies of Union soldiers, declaring “that these dead shall not have died in vain” but rather their sacrifices guaranteed “a new birth of freedom and that government of the people, by the people, for the people shall not perish from the earth.” He constituted what can be described as a promise to the dead that the nation would remember them and their collective sacrifices, and Lincoln obligated the living to guarantee this promise. More than a justification to continue the war, Lincoln activated a hot memory that cultivated a culture of yoking America’s slave past to the present democratic underpinnings of the Civil War.

The hot memory that Lincoln initiated was short-lived. The intensification of the postwar Confederate lost cause movement, coupled with the eventual de-facto and then legal segregation codified within Jim Crow laws helped cool American cultural memory by denying the role that slavery played in American history thus effectively separating the past from the present. American cultural memory of the Civil War continued to cool in the first half of the twentieth century, allowing Americans to ignore their domestic racist past, which enabled their imperialist ambitions and interests across the Atlantic during the First World War. American soldiers buried in the Aisne-Marne cemetery in France died in segregated combat units in the cause of expanding American influence in Europe. In his Memorial Day speech in 1919, President Woodrow Wilson stood in the Suresnes military cemetery and explicitly (without noting the irony) tied the war dead from the First World War to the war dead of the Civil War. He claimed that the Civil War dead died to create a new nation and the First World War dead sacrificed their lives to create a new Europe. Wilson succeeded in incorporating the First World War dead into Lincoln’s promise and likewise obligated the living to remember them collectively as a noble brotherhood of American sacrifice.

As the United States expanded its interests across the Atlantic, Americans could not sustain the chilling effect on cultural memory. The hypocrisy of segregation, especially in the eyes of the nations Americans were trying to influence, manifested itself through the onset of redlining residential neighborhoods, the death of Emmett Till, and the marches in Birmingham and Selma. This duplicity became acute during the Cold War when Communist nations used American segregation to undermine the United States’ spread of democracy. Inside the U.S., the Civil Rights Movement of the 1950s and 60s attempted to heat American cultural memory again by calling for democratic reforms that would incorporate African Americans and others into the American dream. Civil rights leaders marched and protested, in part, to remind Americans of how much their collective past, especially when it came to slavery, was intertwined with the segregationist policies of the present. While this movement succeeded in thawing and even reheating cultural memory, its efficacy waned as the twentieth century closed. The logic of the Cold War, the imperialistic nature of the Vietnam conflict, and the economic stagnation of the 1970s helped cool American memory again. This cooling effect continued as the end of the Cold War allowed Americans to embrace the present, to celebrate their defeat of Communism, which helped distract them from completing the program of racial equality. This cooling trend continued into the twenty-first century with the invasion of Iraq and Afghanistan in the war on terror pushing the American present further and further away from dealing with the traumatic and difficult aspects of the American past.

Donald Trump emerged as a presidential candidate taking advantage of this already frozen memory. President Trump’s denigration of dead soldiers is part of this movement to “drain the swamp” and is a disruption of Lincoln’s promise and of the obligation on which American commemorative traditions have been built. He is not just attacking an individual politician who had been a Navy pilot or a Gold Star Father who spoke out against his presidential candidacy this time, he is calling the war dead collective “losers” and “suckers” including the war dead that Lincoln claimed “gave their lives that that nation might live.”

The first Republican President reminded his audience in Pennsylvania that “the world will little note, nor long remember what we say here, but it can never forget what they did here.” The current Republican President’s personal memory of the past is not unique rather, it reflects the cultural memory of America, cold, presentist, and amnesiac. His unwillingness to remember the war dead in Aisne-Marne or apparently even know “who were the good guys in this war” is symptomatic of a larger cultural amnesia that has been around since the end of the Cold War. American cultural memory, in its frozen state, cannot accommodate the past. Americans must warm their collective memories of the past if they want to navigate the present. They must bring the past into the present in a way that allows for an honest discussion of the past so that they can make informed decisions about the present. Abraham Lincoln understood this when he spoke at Gettysburg. Donald Trump’s refusal to commemorate the war dead at Aisne-Marne illustrates not only how far the Republican party has shifted away from Lincoln but it also suggests just how far American society has moved away from its obligation to remember the war dead. Lincoln’s promise to the dead seems unfulfilled if not wholly broken.