The Rise of the Anti-Analytical Presidency

Michael A. Genovese holds the Loyola Chair of Leadership and is President of the Global Policy Institute at Loyola Marymount University. The author of over 50 books, he appears frequently as a political commentator on CNN, The BBC, CNNi, and elsewhere. 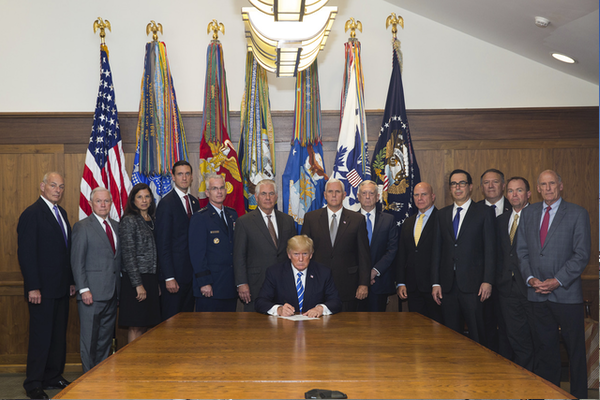 Knowledge, we are told ad nauseum, is power. The first President, George Washington, embraced this idea and obsessed about getting information he could use to make sound decisions. He employed a cadre of spies to provide him with information about his allies as well as his adversaries. And when he became president, Washington continued with his goal of acquiring the best information from a wide range of sources prior to making key decisions.

When President Washington gathered the heads of his Departments (what we today refer to as the President’s Cabinet), he did more than what Article II, Section 2 of the Constitution prescribes: “to require the Opinion in writing, of the principal Officer in each of the executive Departments, upon any subject relating to the Duties of their respective Offices.” He used such meetings for face-to-face discussions (and because of the friction between Hamilton and Jefferson, sometimes heated arguments) regarding the vexing problems of the day. At that time, the Cabinet was small, and Washington had very few on his staff. One could hold a full Cabinet meeting sitting around the average size dinner table. Washington used these meetings as a way to gather information and make decisions based on the best available knowledge. Today, the executive branch is vastly larger in size and scope of power. Presidents appoint roughly 4,000 people to fill posts, and management has become a struggle.

In FDR’s day, the President’s Committee on Administrative Management, better known as the Brownlow Committee, recognized the growth in power and responsibilities of the executive branch, and famously exclaimed, “The President needs help.” Such a large organization that developed around the President could assist him in acquiring sound information, but could just as easily be so unwieldy that it might isolate or develop dysfunctional relationships that poisoned the decision making process.  Over time, the president’s need for information has remained largely unchanged, but the increased size and scope of the executive branch and of the president’s powers and responsibilities have complicated a president’s efforts to acquire the information necessary to decide.

And still, presidents so often seem so woefully bereft of high quality, useable information. While there is no one decisionmaking model utilized by presidents, it is nonetheless useful to ask: how do presidents decide? From where do they get the vital information, options, and data they need in order to make sound decisions?  Good judgment is the most important quality a decision-maker can have, and both individual and institutional forces can interfere with good decision making.

Humans are capable of exercising reason, yet there are a variety of cognitive biases that can interfere with sound judgment. These biases inhibit our ability to make reasoned judgments. From confirmation bias, to commitment escalation, to the use of false analogies, to anchoring and more, these cognitive biases can trip us up and lead us astray.

Presidents cannot afford to make many mistakes. When we make a bad decision, its negative impact is usually confined to ourselves and those immediately around us. When presidents make mistakes, people can die.

There is no way to eliminate all impediments to sound decisionmaking, but there are things presidents can do to increase the likelihood that they will make sound decisions. Process is one key. Presidents must set up a rational process that helps provide evidence and information, presents several sides to arguments, presents the president with a variety of options designed to give the president what he needs to decide. Process is not a panacea, but when we provide a president with tools for deciding, we make it easier for the president to choose based on solid information.

Presidents are especially susceptible to isolation, group-think, and ideological blindness. How, one might ask, can a president who sits atop the world’s greatest information gathering machinery not have the tools necessary to decide? Because we all have cognitive biases that affect decisionmaking. The institutional machinery that surrounds a president and is intended to serve their needs may actually lock out vital information and key ideas and options, thereby isolating a president from reality.  In serving the president, staff may become flatterers and tell the president what they want or even demand to hear, not what they need to hear.  There is a tendency for staff to become “yes men,” sycophants, afraid to deliver hard truths to the leader. Or the demands for group solidarity can become an overarching goal, with contrary arguments ignored and critics silenced or self-silencing so as to maintain teamwork and common mission. This can become especially troublesome when the president has a clear ideology, and little patience for “non-believers.”

Decision making maladies can be diminished if the president is an astute manager (or his chief-of-staff is) of process. But presidents are notoriously bad managers, or refuse to spend precious time or political capital on managing. But to ignore management is to invite trouble.

In recent years we have seen the rise of the “anti-analytical presidency”, defined as an administration that embraces a personalistic office where information and data are subordinated to the demands or needs of the president, and where rigorous science and robust information accumulation are secondary to the ideological or personal views of the president.  Rather than rely on evidence, information, or data, rather than consult experts and scientists, an anti-evidence and anti-science bias has often been employed in making policy, one that eschews critical thinking and turns a blind eye to the demands of logical reasoning.  From the Trump administration’s embrace of “alternative facts,” to their anti-science approach to climate change, the refusal to rely on expertise and evidence has become a central component of decision making in the Trump inner circle.

President Trump is notorious for personalizing process. In fact, he eschews process. He believes that he doesn’t need to read reports as he is already a “stable genius.” Where past presidents met at the start of every day with a reading of the President’s Daily Briefing (PDB), a compendium put together by the intelligence agencies of the key issues and challenges ahead, President Trump has found the PDBs long and boring, and often bypasses the briefings. Compounding the problem, Trump often expresses a distrust of the intelligence community over which he presides (it is, he believes, part of the “Deep State” conspiracy against him), and refuses to rely on the information provided by the intelligence professionals.

President Trump was warned numerous times as early as January of 2019 that a lethal virus was spreading in Wuhan, China, and could cause a global pandemic. Trump refused to believe the experts and dismissed or downplayed the seriousness of the coronavirus, thereby refusing to take sufficient early action when it could have made a dramatic difference. Precious weeks were wasted, time when the US could have put a testing, tracing, and isolation program in place, set social distancing and mask-wearing guidelines, and accumulated the necessary personal protection equipment (PPE) and ventilators. The “process” got the warnings to the President. The President refused to listen.

An anti-analytical presidency has consequences, often leading to faulty, incomplete, or misleading information. How can we solve complex scientific problems if we refuse to rely on science?  The tools for making sound decisions are available, and while no panacea they can be effectively employed to heighten the odds in decisionmaking. Not to rely on them is a choice presidents sometimes make, often with tragic consequences. We cannot force a president to seek out information and review options. Deciding can be an intensely personal process. But rare is the president who openly and consciously chooses to short-cut information. It is, it should go without saying, a fool’s errand to act on instinct when information and data are available.