The Lenin Plot: The Concealed History of The US-Led Effort to Overthrow the USSR

Barnes Carr was for many years a journalist for daily newspapers in Mississippi, Memphis, Boston, Montreal, New York, New Orleans, and Washington, D.C. He was trapped in New Orleans during Hurricane Katrina and the short story he wrote about the experience was awarded a William Faulkner Gold Medal. His book The Lenin Plot: The Unknown Story of America's War Against Russia is available now. 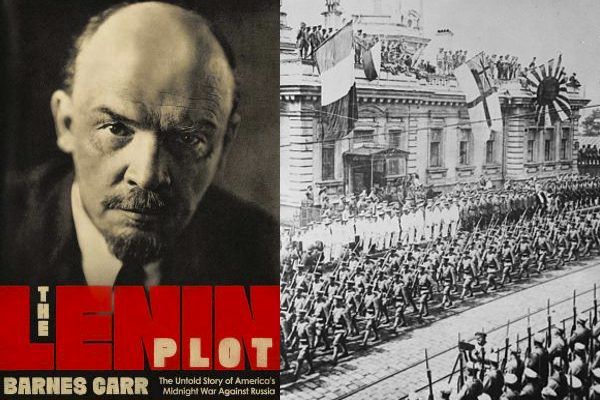 With the United States again accusing Russia of election interference, and Moscow again accusing Washington of rattling sabers on the Russian border, there’s been talk of a “new” Cold War. But what exactly does that mean? What happened to the “old” Cold War?

For years the prevailing narrative said that the Cold War against the Soviet Union started shortly after the end of World War II. Financier Bernard Baruch coined the term in a speech he made before the South Carolina legislature in 1947. He warned that a “new kind of war” was being fought “in which guns were silent; but our survival was at stake nonetheless.” As it turned out, the guns were not silent, and the Cold War went on to include hot wars against Soviet surrogates in Korea, Viet Nam, Cuba, and other trouble spots. And it wasn’t just a shooting war. It was also an attempt by each side to defeat the other side politically, economically, and culturally. The difference was that the Cold War was not an officially declared war, as both the world wars had been.

But the true origin of what President Kennedy called “the long twilight struggle” goes back much further, as I explore in my new Cold War history, The Lenin Plot: The Untold Story of America’s War Against Russia, published by Pegasus Books in New York and Amberley Publishing in the U.K. The Lenin Plot was a two-pronged operation, to (1) invade Russia and defeat the Red Army, and (2) stage a coup in Moscow, assassinate Soviet dictator V.I. Lenin, and get the country back in the war.

The plotting began shortly after Lenin seized power from the Provisional Government on October 24, 1917. Lenin called it the “Bolshevik Revolution” and the “Great October Socialist Revolution.” But it wasn’t a true revolution, a general uprising of the country. That had already occurred, in February 1917. Russian historians now see Lenin’s takeover as a military coup.

The Western Allies were alarmed at the bloodbath the Bolsheviks were conducting against innocent civilians. The Provisional Government had declared political amnesty for all, but the paranoid and vindictive Lenin wanted his enemies exterminated. In the Western view, Lenin’s coup was actually a counterrevolution that returned Russia to old tsarist days of widespread terror, torture, and mass murder.

The Allies were also alarmed by Lenin’s secret deal with Germany. Berlin had sent millions of marks to Lenin’s agents in Stockholm, and they laundered the money and passed it along to the Bolsheviks to finance a coup against the Provisional Government. In case of success, Lenin would take Russia out of the war, allowing Berlin to redeploy army divisions to the Western front, the main battleground. Speaking of this deal, Lenin said, “We would have been idiots not to have taken advantage of it.”

Secretary of State Robert Lansing, a bored pacifist who usually sat doodling in Cabinet meetings with President Wilson, sprang into action and used the State Department as a bully pulpit to demand immediate action against Lenin. Lansing told Wilson that the United States had to stage a coup in Moscow and install an Allied-friendly “military dictatorship.” Lansing suggested U.S. funds be sent to the French and British as military assistance, and they could launder it for use in the plot against Lenin.

“This has my complete approval,” Wilson told Lansing in December 1917.

De Witt Clinton Poole, a young U.S. consul in Moscow and a former tennis star nicknamed “Poodles” at the University of Wisconsin, was sent on a secret mission to recruit a Cossack army in South Russia. But Poole found the generals down there too antagonistic toward one another to mount a coordinated attack on the Bolsheviks. Poole returned to Moscow without a new Caesar, but the fledgling Lenin Plot was not quit. It merely segued into 1918.

Poole became Washington’s spymaster in Russia. His chief field officer was Xenophon Kalamatiano, a University of Chicago track star who had sold tractors in Russia before the Allied embargo. Kal recruited dozens of assets, including the head of the Red Army’s communications office. Poole and Kalamatiano sent their reports to U.S. ambassador David Francis, a bourbon-sipping old Confederate who forwarded them to the State Department’s Bureau of Secret Intelligence, predecessor to the CIA and NSA.

One of Kal’s closest spy colleagues was Henri de Verthamon, a French saboteur who wore a black trench coat and beret, and slept with his explosives under his bed. Another was the impressively named Charles Adolphe Faux-Pas Bidet, who had worked the Sûreté’s case against Mata Hari. The British Secret Intelligence Service (later MI6) was represented by Sidney Reilly, a freelance Russian adventurer and drug addict who had visions of himself as another Napoléon. The British Foreign Office sent Bruce Lockhart, a footballer susceptible to the charms of exotic women, one of whom, Maria Benckendorff, was a triple agent serving Britain, Germany, and the Soviets. Then Boris Savinkov, an experienced Socialist Revolutionary terrorist, was added to the Western plot. Savinkov was also a drug addict; he saw himself as Nietzschean Superman immune to bullets. He and Reilly advanced the conspiracy from a simple capture of Lenin to an assassination plot.

Allied forces invaded Russia and fought the Red Army in an attempt to support the Moscow plotters. But Wilson and Prime Minister Clemenceau made a mistake in placing U.S. and French troops under British command. Most of the British officers were mental or physical rejects called “crocks” or the “hernia brigade.” They resented being shuffled off to a “sideshow” like Russia, and took out their anger on the American and French troops under them. The crocks arrived with 40,000 cases of Scotch whiskey, and their drunken incompetence caused Allied battlefield deaths. The Yanks and poilus retaliated by staging mutinies against the British. One doughboy walked up to a crock, told him to say his prayers, and shot him dead. Sanity finally arrived after the British commander was sacked and replaced with Brigadier General Edmund Ironside, a decorated officer from the Western front. The troops loved him.

Lenin was shot and seriously wounded by Fanny Kaplan, a hardened Socialist Revolutionary terrorist. Allied agent Savinkov said he gave Kaplan her pistol. The shooting caused a dramatic escalation of the Red Terror, resulting in thousands of deaths. Thousands more casualties were counted in the combat zones.

The Lenin Plot was a massive embarrassment for the Allies, and they tried to cover it up. The denial continued for years. President Roosevelt said a “happy of tradition of friendship” had existed between the U.S. and Russia “for more than a century.” President Reagan in a television address said “our sons and daughters have never fought each other in war.”

I first found out about the Lenin Plot when I was a student at Tulane. I met a gentleman at the university library who had known some young men in Paris in the twenties who served in the war against Russia. I’d never heard of that. I started checking.

The internet was a primitive tool at that time, so I consulted bound volumes and microfilms of the London Times, the French L’Illustration, and the Literary Digest, an American news weekly. Times coverage stood out because their Russian articles were written by historians and former military officers. The newspaper also published an encyclopedia, The Times History of the War, which covered the Russian campaign in detail.

A few other histories of Allied involvement in Russia had been written, and some were helpful in providing leads. But I learned to distrust a lot of “scholarly” research because many of the writers simply rewrote one another without verification. That’s hearsay, not original research.

Internet research is easier now. Old publications have been digitized and posted to the net, and I found a number of interviews that way. The Hoover Institution at Stanford and the national archives in Washington, Paris, and Kew, England, provided copies of many documents not available on the web.

But beware of censorship on the internet. The State Department on their website admits that certain documents have been “edited” before being posted, in order to “avoid impeding current diplomatic negotiations.” To get around that, I verified documents by using bound volumes of the State Department’s Foreign Relations of the United States, published long before the internet. Bound volumes of the Readers’ Guide to Periodical Literature also contained much valuable information not available on the web.

I shy away from websites with “wiki” or “.com” in the title. They, too, tend to run unverified information. I use “official” documents and the web only as a starting point, as a clue to what really happened. I recommend that researchers contact libraries, archives, and presidential libraries, and look for letters, notebooks, diaries, interviews, memoirs, autobiographies, photographs, and eyewitness accounts. You’ll find the truth only by persistent digging off the grid.