Demon vs. Monster: The Vice-Presidential Debate and an Historian’s Harassment

Historian Lora Burnett has been completing a book on the culture wars and the conflict over “western civilization.”  She never thought she would have to add a chapter to her book about her own experiences as a professor.  Until yesterday.

Burnett, who goes by L.D. Burnett on Twitter where she has over 16,500 followers (I’m so jealous; I only have 739!), teaches at Collin College, northeast of Dallas.  During the vice-presidential debate, to which Vice President Pence arrived with an obvious case of pink eye, or conjunctivis, Burnett tweeted:

Shortly after she added this:

On Friday morning Burnett’s tweets made it into an article on Campus Reform, the right-wing website that specializes in fomenting the harassment of liberal and left-leaning faculty members of whom it disapproves.  The story was picked up by Fox News later that afternoon.  Sadly, what happened next is hardly surprising, given what we know about the targeted harassment of faculty members.  Burnett began to receive an avalanche of hate mail via tweet, Facebook, and her college email account.  Many of these were also sent to her college administration.  Here’s a small sample: 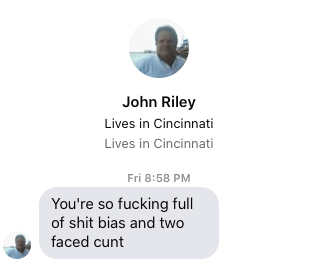 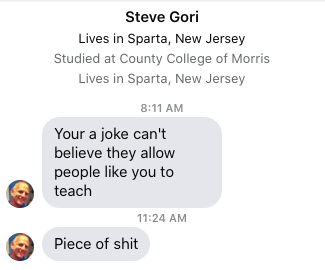 Many of the harassing tweets came from accounts with few or no followers; perhaps they are bots.  But her college administration took note and, alas, their response was not in the least admirable.

Yesterday, an email went out to all members of the Collin College faculty over the signature of the college president, Neil Matkin.  It read:

Recently, one of our faculty members chose to post some political and other statements on her social media accounts.  One of the posts referencing Vice President Pence was picked up by national media and has been in broad circulation among some of our college constituents.  Emails, complaints to the Board, calls and contacts from legislators, and voicemails poured in over the weekend.  Most of the emails are asking us to terminate the faculty member although a handful are encouraging us to uphold “academic freedom” and “free speech” or are writing to tell me that the faculty member in question is an amazing scholar.

We are not aware of an issue with academic freedom nor is the scholarship of the faculty member in question. The college’s execution of its personnel policies will not be played out in a public manner; however, we will address what has become an intense public issue by posting the following statement on our website.  As always, regardless of our political or social viewpoints, my encouragement is to act with civility, patience, and forbearance.  The statement follows:

“Collin College is aware of the hateful, vile and ill-considered Twitter posts by one of its faculty members.  As a community, we cannot and will not ignore them.  We deeply apologize for the offense her comments have created.  The faculty member’s expressed views are not consistent with the values of Collin College, particularly our Core Values of dignity and respect.  Further, the views were not conveyed in any manner we wish members of our faculty and staff to express themselves.

“Free expression is a cherished right guaranteed by our Constitution, but that does not lessen our individual responsibility to protect such rights through our own care and consideration.  At the very least, in our free exercise of expression, professionalism should dictate decorum rather than resorting to profanity.

“While this instance of unfortunate speech may be protected, incendiary comments such as these do not best serve our community, nor do they advance any positive solution.  Hate and profanity are never welcome, especially during this time when we, as Americans, are searching for the best path forward for our Nation.  Such comments make it that much more difficult for all who hold diverse views to come together, as our country so desperately needs.  Notably, these comments are a setback to the hard work and dedication of our campus community and all that Collin College has achieved this year.

“Faculty members, as representatives of their profession and of our distinguished institution, have a special obligation to remember that their public statements reflect on their unique roles both in educating students and modeling behavior, as well as on the college that provides them with the opportunity to educate.  Hateful and profane speech expressed in any forum is not how we should strive to conduct ourselves.”

In this challenging period, Collin College urges all to express themselves with grace, civility, and respect for others in a manner worthy of this Nation and the core values we share.

President Matkin did not have the common courtesy to contact Professor Burnett in advance of this statement, which was posted prominently on the school’s website.  When she emailed him to point out that he might have done so, he brusquely ended communication.

While it is encouraging that the statement does not threaten disciplinary action and acknowledges, it would seem, that Burnett’s tweets are protected under the Constitution, it is not at all clear that she is out of the woods.  Experience suggests that when institutions issue these kinds of condemnatory statements the harassers are only encouraged to push harder.  And it’s difficult to be optimistic about any future institutional response.

To put it bluntly, the notion that Burnett’s joking tweets about Pence’s pink eye were “vile” and “profane” is ridiculous on its face.  Profane?  Uh, I’m an atheist Jew but doesn’t the word “demon” appear in the Christian Bible in a few places?  Burnett ought to know, for she’s not only an historian and a teacher but also an ordained minister who serves as the college minister for her church.  (Hardly the flaming radical of the Fox imagination.)  And didn’t the President of the United States refer to Pence’s debate opponent, Sen. Kamala Harris, as a “monster?”  I guess for the tiny demographic for whom The Exorcist was a documentary there may be a difference, but if the president can be free to publicly label a Black woman a monster why can’t someone call a white guy with pink eye a demon?

But what is really shocking is how this alleged “educational leader,” a college president, could evidence such rank disdain for the academy’s and society’s most precious core values by placing the words academic freedom and free speech in scare quotes.