Frank Domurad was former Director of the Budget for the New York City Council President and New York City’s Deputy Auditor General. He is also an historian of modern German fascism. His most recent book is Artisans and the Political Struggle for Social Order in the Weimar Republic. 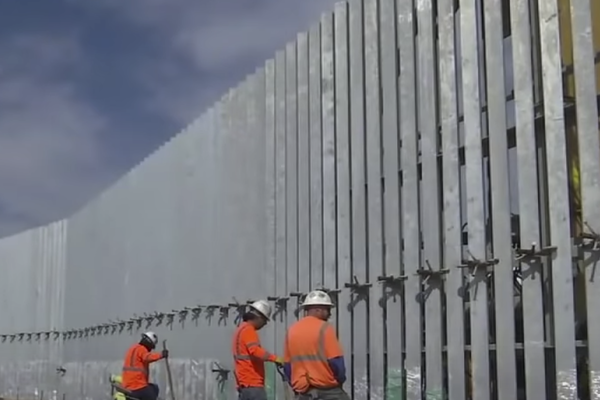 Editor's note: This essay was submitted and accepted for publication prior to the events of January 6. The author has added a brief note indicating reflecting the magnitude of the day. It is the editor's opinion that the essay nevertheless addresses a longer-term question about the security of Americans and the nation that remains significant.

As the Soviet Red Army closed in on Adolf Hitler’s bunker in Berlin in the waning days of the Second World War, Germany’s Chancellor for a Thousand Year Reich became ever more delusional and desperate. Almost to the end of his life he continued to believe that some technological or military miracle would turn the course of war and save him and his regime.

At some point, however, hope irrevocably faded in his twisted mind, and bitterness and a desire for revenge replaced it. He became convinced that it was not his role to shoulder the blame for Germany’s defeat, but that of a nation whose will to persevere was lacking, thereby betraying him and his mission. He came to believe that such cowards did not deserve to survive.

The result was what has come to be labeled by historians as the infamous “scorched earth” or Nero decree, after the brutal Roman emperor. Promulgated on March 19, 1945, a mere two months before the end of the war in Europe, its rather anodyne formal designation, “Destructive Measures on Reich Territory,” belied its demand for the massive destruction of Germany’s remaining infrastructure vital to its population’s survival after defeat.

For Donald Trump his loss to Joe Biden in the recent Presidential election has been the psychological equivalent of a lost war that he believes he should have won. While he has not issued a formal American version of the Nero decree, his actions, motivated by disbelief and resentment, are filled with a desire for retribution against a nation that has supposedly abandoned him.

Nothing symbolizes his present nihilistic attitude more clearly than his approach to our country’s infrastructure, the very same object of Hitler’s ire some seventy-five years before. Having swept into office in 2016 on the slogan of Making America Great Again, he promised to rebuild the material backbone of the nation on which its future health and prosperity depended. He chastised his predecessors for not having reconstructed and expanded our roads, railways, dams, electrical networks and much more. In Atlanta in July of this year, at a news conference announcing the “overhaul” of the infrastructure approval process, he proclaimed himself to be a master builder who understood “construction and building, and other things beyond building.”

Yet after four years in office Trump has overseen a continued deterioration of the nation’s infrastructure that probably would now give it a grade even lower than the D+ announced by the American Society of Civil Engineers (ASCE) in its 2017 Infrastructure Report Card.  Despite a campaign promise to invest $1 trillion in the rebuilding of America, he has never seemed interested in initiating any meaningful public works project except for one, his “big, beautiful” wall separating the United States from Mexico.

Ever since the election, construction on the wall has accelerated. Like a zombie that refuses to die, it trudges across the southwestern landscape without purpose or function. According to one recent NPR report, Trump’s contractors are leveling everything in their path, “dynamiting mountainsides and bulldozing pristine desert.” In scenes reminiscent of some American version of a Wagnerian Twilight of the Gods, 13 different contractors on 29 construction projects from San Diego to Brownsville, Texas, are working “all night long under light towers to meet Trump's goal of 450 miles of new barriers before his term is over."

Trump and his allies are weaving a similar path of destruction with respect to state and local governments, our providers of essential services and front-line fighters against the depredations of the Covid-19 virus. In the face of repeated Democratic efforts to include financial aid for these beleaguered jurisdictions in any new pandemic-relief bill, Senate Majority Leader Mitch McConnell has steadfastly refused even to consider such a measure. According to Moody Analytics, state and local governments that entered 2020 with $119 billion in so-called “rainy day funds” to offset unforeseen revenue shortfalls now face a projected shortfall of $450 billion over the next three years, even with an economic recovery.

The Senator leading the charge in this “scorched earth” approach to state and local finances, is Rick Scott of Florida. Writing in an op-ed piece for National Review, he castigated Democrats who wanted Congress “to just send money to liberal politicians who have already shown they can’t be trusted with it.” He concluded that such profligate elected officials have these budget shortfalls because “they did not prioritize their struggling constituents in the first place, and instead wasted money on other things.”

What Scott conveniently neglected to mention in his op-ed was that his own home state of Florida, which surely must be a model of fiscal virtue since it is governed and represented by conservatives such as himself, was among the most profligate jurisdictions in the country. It is now confronting a $5 billion deficit in general revenues that fund such things as schools, health care and public safety. This shortfall has led Republican State Senate President Wilton Simpson to opine in what must be an epitome of understatement, “we have less revenue, therefore we will have less government.”

The problem is that less state and local government inevitably means less ability to fight on the ground the Covid virus raging through our communities and greater dependence on a White House that simply no longer seems to care. For Trump the virus has always represented a war that he might lose and there is nothing more he fears than being considered a “loser.” His mantra at one election rally after another has always been “COVID, COVID, COVID,” an almost magical incantation followed by the promise that the disease would soon end either of its own accord or because he won re-election.

Trump, like Hitler before him, has always placed his hope in the development of a miracle solution to his problems, in this case the discovery of a vaccine. He has consistently failed to express any sympathy for the more than 300,000 Americans, who have lost their struggle against the disease, as well as the distraught families they have left behind. While we will never know for certain what his actual thoughts are, it is not inconceivable, given his statements and actions, that he sees his dying fellow Americans as some form of “losers,” especially since they disproportionately come from weak and discriminated communities in nursing homes and black and brown neighborhoods. When asked in September to comment on the fact that at that time a thousand or more of his countrymen/women were losing their lives each day, he responded with aplomb, “they are dying. That's true. And you -- it is what it is.” For him it is obviously but a small step from weakness to expendability.

Indeed, his willingness to consider expendable those who have neither the will nor the strength to share his belief that he ought to remain our nation’s commander-in-chief for a second term has seen [until the events of January 6—FD] no more dangerous incarnation for our safety than in his attitude toward the recent revelations of a massive intrusion into America’s cyber security systems, both in the public and private sectors. In modern society, computers, their operating systems and the networks that connect them are the backbone of civilized life. To threaten their functioning is to threaten our national security, economic prosperity and material well-being. In the words of the Department of Homeland Security’s Cybersecurity and Infrastructure Security Agency, “this [cyber] threat poses a grave risk to the Federal Government and state, local, tribal, and territorial governments as well as critical infrastructure entities and other private sector organizations."

What has been the reaction of Donald Trump, the President of the United States, to this existential challenge to the core of our existence? Almost absolute silence. In the face of the grievances that he continues to harbor over a “stolen” election, in his mind this country’s potentially worst case of foreign spying on its soil pales in comparison.

It is sad to say, but there is probably nothing to be done to extract Donald Trump from his self-imposed, psychological bunker of hatred and revenge. The election of Joe Biden as President and Kamala Harris as Vice-President will in the short-run ameliorate some of the most pressing effects of Trump’s Nero Decree. Yet Trump, his enablers and supporters continue to reject the legitimacy of any democratically elected government that they cannot control and rule, which means that their actions and beliefs leave open the most troubling question of all.  How do we convince millions upon millions of our fellow citizens that they do not need to destroy America in order to make America Great Again?