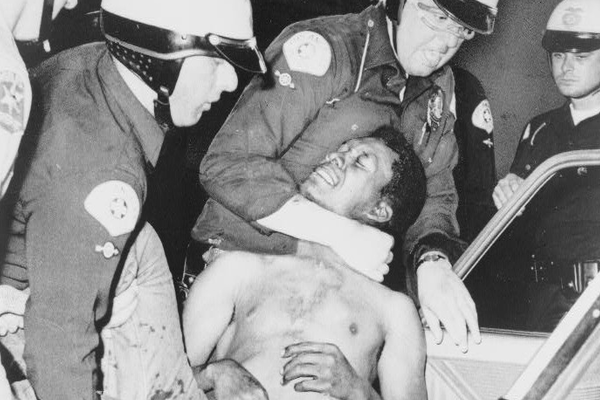 A man is arrested during the August 1965 unrest in Watts.

“People are trying to kill me!” he'd cried from Coney Island Avenue’s far side with no one near. He repeated as if shouting a mantra: “They want to kill me! It's assassination and I'm going to snap! People are trying to kill me!” Last month he’d raged about “those who’ve been committing  treason,” warning that “You know how we punish traitors!” He paced with me as we passed the One Stop Market, then the school on Brooklyn’s Caton Avenue. I matched his stride to transcend my nerves and respect the intense taller man. He veered off on his own upon reaching the park, still shouting at air.

This was different. A knit Jets cap kept his head warm. His mind was on fire. “They want me dead!” he kept on, street-crossing toward me. To the left, male and female joggers awaited the “walk” sign. The agitated man would, I thought, pass between us. The couple slanted to leave a wide lane he aimed for, then curled from to face me before I stepped down. “People are trying to kill me,” he cried. “It’s an assassination! What would you do if I said Icould try to kill you?”

“I’d say you’re my brother,” I answered, “so let's slow this down to not harm one another, then talk thoughtfully about how we together could solve the issues at hand.”

He stared in silence, then offered that “I can respect you because you showed me respect.”  He backed up two steps, then leaving called back that “other people are trying to kill me. I feel like I could snap! And I have a right to snap!”

The joggers observed but said nothing. Did they empathize from a distance?  Perhaps they dismissed him. I’ve hoped to see him on subsequent days since we've broken the ice. I want to know more about him. I've assumed he showed the rage and fear that African Americans repress to survive our racist ways.

John Howard Griffin's seminal 1961 Black Like Me “disabused the idea that minorities were acting out of paranoia,” Washington University (St. Louis) Professor Gerald Early writes. Griffin chemically treated his white skin to pass as Black on a journey through the Jim Crow South to expose the authenticity of racism and denial, both personal and systemic. The question when the book made waves still applies: What will one do with the knowledge?

No book or ballad, Senate bill or people’s protest alone pierces an inertia that enshrines the status quo. Our “all or nothing” public culture prizes quick fixes over sustained efforts toward substantive social change. We laud tragic heroes or heroines, lay their bodies to rest, then resume business as usual.

“May all of us that he will leave behind under this dome pray for even a fraction of his strength to keep bending that arc toward justice,” Senate Majority Leader Mitch McConnell said when Congress Member John Lewis lay in state at the Capitol. Yet McConnell barred a Senate floor vote on $2000 relief checks as 25.7 million Americans lack adequate food, Feeding America, a national nonprofit food bank network, disclosed in December. A McConnell speech – with little internal outcry -- rebuffed the proposal as “socialism, a political stunt by the junior Senator from Vermont,” Bernie Sanders.

The Kentucky Republican, in the December 4, 2017 Wall Street Journal, lauded the Trump tax law that the Center on Budget and Policy Priorities in public testimony termed fundamentally flawed:

Senator Lindsey Graham endorsed the $2000 legislative proposal and said a floor vote would pass it. Senator Sanders cited 6000 overnight emails that confirmed the nation’s need for it.

The Peter G. Peterson Foundation, named for a Nixon Commerce Secretary, reported on May 13, 2020 that “the United States spends more on defense than China, India, Russia, Saudi Arabia, France, Germany, the United Kingdom, Japan, South Korea and Brazil, the next ten countries, combined” at $732 to $726 billion. Yet the National Defense Authorization Act 2020 sailed through the Senate before it recessed.

“The machine has been programmed to dump out of one spigot a vast arsenal of lethal military junk, out of another a diminishing trickle of services,” Father Daniel Berrigan presciently wrote fifty years ago in No Bars to Manhood. “The isolation of power more and more separates men from the fate of its victims.”

The man who cried out to me symbolized the plight of many among us.

What will we do with the knowledge?

The Kerner Report's still timely proposals show what we need to do now. Will our President Biden revisit that road map to justice? Will grassroots pressure activate the immense Federal bureaucracy?

That would be a fitting response to the Trump Insurrection and the corner man's cry.