The History Behind Demands for "Trial by Combat"

Eric Jager is Professor of English at UCLA and author of several books including The Last Duel: A True Story of Crime, Scandal, and Trial by Combat in Medieval France. 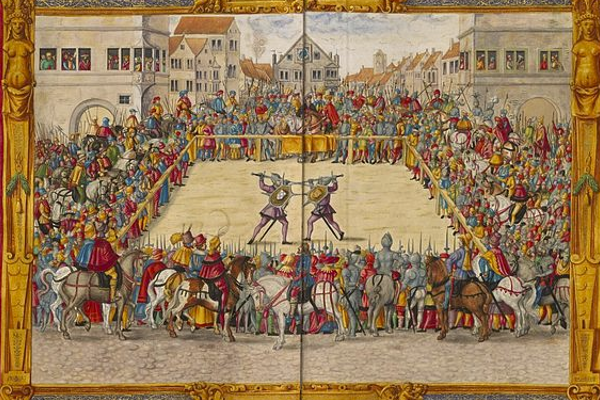 Trial by combat would seem to be a thing of the past, or something found in historical fiction like Sir Walter Scott’s Ivanhoe or the TV series Game of Thrones, where Tyrion Lannister demands a judicial duel to resolve a murder charge against him. But appeals for it still crop up occasionally in today’s news.  Just last month, shortly before the January 6 assault on the Capitol, Rudy Giuliani told “thousands of fired-up pro-Trump protestors that they should contest the election results via ‘trial by combat.’ (Giuliani later claimed that he had merely been referring to “Game of Thrones.”)” And as recently as January 2020, a Kansas lawyer called for “trial by combat” (with samurai swords) against his estranged wife and her attorney to resolve a child custody suit.

People today often have a hard time understanding how medieval society could have expected a judicial duel — often a fight to the death in criminal cases — to provide a fair conclusion to a legal dispute.  A duel seems tantamount to a throw of the dice, or, worse, a thinly disguised form of the deeply flawed notion that might makes right.  The

fact that trial by combat, also known as “the judgment of God,” traditionally looked to heaven to assure a just and fair verdict only makes the whole thing seem even more preposterous to us today — although Guiliani’s appeal for it seemed to go down well with his crowd of Trump supporters.

The famous Carrouges-Le Gris affair of 1386, where a case of alleged rape was ultimately resolved by combat, was reputedly the last such combat ever ordered by the Parlement of Paris, although court-sanctioned duels continued to be fought in other parts of Europe long afterwards.  My book The Last Duel (Broadway, 2004) explores this very controversial case and is also the basis of the Ridley Scott film of the same title to be released in October.  Matt Damon, Adam Driver, and Jodie Comer play, respectively, the knight, the squire and the noblewoman caught up in the celebrated affair, which became the fourteenth-century equivalent of a high-profile celebrity scandal today.

In the BBC TV-documentary (2006) also based on my book, historian Jonathan Sumption (at the time Queen’s Counsel and later a Justice of the Supreme Court of the United Kingdom) offered an explanation that may enable us to think our way back, at least a little bit, to a time when laws and beliefs were very different from today and the duel actually made a kind of sense to people:

They thought God supervised the world from moment to moment and intervened at any moment to achieve whatever result he thought desirable.  If you take that view of the world [and] of God, it’s not altogether irrational to suppose that if one man prevails over another in a duel, it’s because God caused it to happen.

The Body of Truth

A feature of judicial combat that may also help explain its appeal in the Middle Ages is the centrality of the body in medieval law as well as in chivalry, religion and other areas of life.  In legal confessions, for example, the body was seen as giving testimony against the accused, a view that was used in turn to justify torture as a means of extorting hidden truth.  The notion of hidden truth also supported the judicial duel.

Trial by combat, for all its military pageantry and obvious appeal as blood sport, was at its legal core a formal, sanctioned way to test an oath.   That is, each combatant solemnly swore in advance that he and only he was telling the truth — which clearly meant that one of the two had sworn falsely.  But which of the two?  It was the purpose of the duel to answer exactly that question.  The combat was a public and decisive way to test two opposed and mutually exclusive oaths — just as a jury trial (despite its many flaws) is the usual way today of testing two antagonistic claims, with words rather than swords.

The 1386 duel followed a time-honored tradition of putting legal claims to the test in the form of physical combat.  Just as a confession, even if extracted by torture, was thought to reveal a hidden truth, so the ferocious logic of the duel implied that proof was already latent in the bodies of the two combatants, and that the duel’s divinely assured outcome would reveal which man had sworn falsely and which had told the truth.  By definition, he who lost had lied, and the proof of the lie was his losing.

According to the Parlement’s summary of the 1386 case, Jean de Carrouges accused Jacques Le Gris of several crimes, but chiefly of rape.  If Le Gris refused to admit his guilt and could not be convicted by witness testimony or other evidence, Carrouges demanded a trial by combat in order “to show and prove” his accusations “by his body [de suo corpore] or that of his proxy.” Thus, Carrouges offered his own body in order to obtain proof through battle, a form of proof that required Le Gris’s body as well.

To understand better the logic of the duel and its demand for bodily proof, let’s take a look at the traditional rules and regulations of trial by combat.  These are contained in a type of document known as a formulaire.  The formulaire still in force at the time of the Carrouges-Le Gris case had been issued eighty years earlier by King Philip VI in 1306.  Its full title, translated, is Ceremonies for the Wager of Battle according to the Constitutions of Good King Philip of France, but for convenience we may simply call it “Rules for Duels.”

The Rules for Duels set out four conditions that must be met before a trial by combat may be authorized: (1) the crime must be certain to have occurred; (2) it must be a capital offense such a murder, rape, or treason; (3) the accused person must be widely suspected of the crime; and (4) all other legal remedies had to have been exhausted, with armed combat — “proof  by one’s body” — as the only means of conviction left.

Carrouges’s brief, as we have seen, expressly offers his own body as the means of proving his claim.

The rest of the 1306 decree specifies the elaborate rules and procedures of the duel, from the initial appeal and the formal challenge to the elaborate ceremonies at the field of battle that precede the combat itself.  A key part of the battlefield ritual is the presentation of the scrolls, which takes place right after the two armored and mounted combatants identify themselves and enter the field. 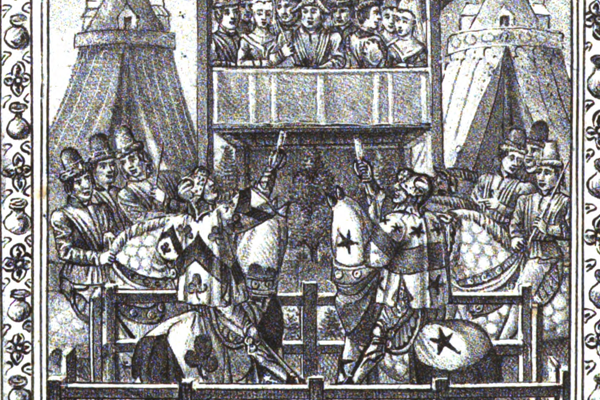 The scrolls, prepared in advance by lawyers, contain a summary of the two combatants’ charges — that is, why they have come to fight.  In one image, they sit their horses and brandish their scrolls like weapons!  The image perfectly captures the shift in the progress of their case from legal argument to mortal combat, reminding us that the duel, a legal last resort, was still an integral part of the law, unlike the private and illegal duels of later times.

Another key ceremony is the series of three solemn oaths that each combatant must swear prior to combat, affirming the truth and justice of his charges.  Their mutually contradictory oaths are embodied by the staging of the second and third oaths in particular, where the two armed opponents kneel face to face, a sign of their antagonism.  With his right hand bared, each man also touches the holy objects on the altar — a massbook or a copy of the gospels, along with a crucifix and possibly saints’ relics as well to make the oath even more binding. 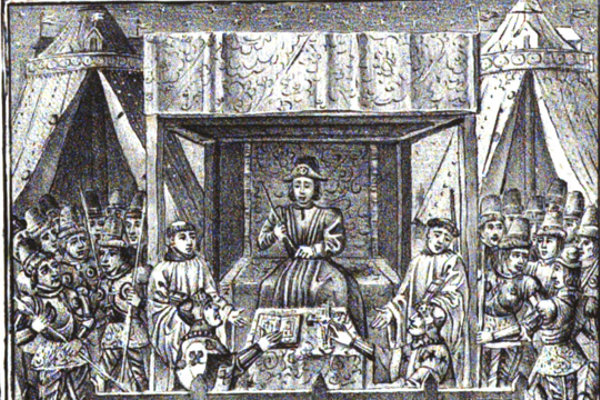 The oath seals a mutually destructive contract to fight it out.  In speaking the words of the second oath — and all of the oaths are as heavily scripted as a liturgy — each man swears that his cause is just, that he speaks the truth on peril of his soul, and that he would give up the joys of heaven for the pains of hell if in fact he swears untruthfully.  In concluding this oath, each combatant vows that he places his sole reliance “on God and on my right, by my body [mon corps], by my horse, and my arms.” Again, the body is the means of proof — including the horse’s body!

In some formulaires, the third oath includes an emphatic gesture.  Still kneeling face to face, the two combatants now reach across the altar and clasp their bared hands — using the left hand, not the right, in order to signify a hostile rather than a friendly oath. The marshal also holds their joined hands on his open palm, binding the two men together and to himself, the master of ceremonies (and the king’s representative) in the ritual of the duel.  Then the two combatants swear their final oath, beginning with the appellant.  What Jean de Carrouges would have said goes something like this:

“O thou, Jacques Le Gris, whom I hold by the hand, I swear on the Holy Gospels and by the faith and baptism that I hold from God that the deeds and words that I have attributed and made others attribute to you are true, and I have a good and true cause to summon you, while yours is evil.”

The fact that the accuser holds his opponent “by the hand” is contractual; it seals the solemn oath.  But it also symbolizes the bodily nature of the proof that the two men are about to provide on the field of battle, the physical combat to which the oath binds each of them.

This third and especially fierce oath, like the rest of the ceremonies, is heavily scripted, and yet we can imagine the personal feeling, the deadly hostility, that Carrouges and Le Gris also brought to the occasion.  One man was determined to defend his wife’s honor and to avenge the crime against her, while the other was equally determined to disprove the charges and remove the terrible stain on his name and reputation.

According to the ruthless logic of the judicial duel, or “the judgment of God,” one of the combatants must be guilty, while by the same token the other must be innocent.  At the start of the duel, innocence and guilt remain hidden, but they will become perfectly clear by the end.  Both men will fight, but only one will live. One man will leave the field alive, purified by the ordeal, while the other will be defeated, or lie dead, his vanquished or lifeless body the proof of his guilt before all. 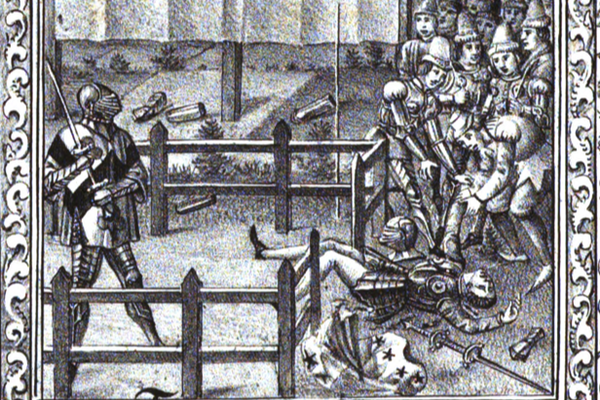 Today a call for trial by combat may seem like crazy talk or a sign of sheer desperation with the legal system.  But it may also hint at an old and deep-seated desire for a clear, definitive verdict in tangled human affairs where the truth proves elusive.  How satisfying it would be, some may think, to put the truth to the test of combat!  Indeed, traces of an older, more violent way of settling quarrels are still dormant in our speech today: the accused is known as the “defendant,” and we sometimes speak of “crossing swords” or “championing a cause,” a champion being originally a person who fights in another’s place (as in Tyrion Lannister’s case).  And while few of us may wish to revive trial by combat, its allure will persist as long as some dissatisfied plaintiffs call for the verbal jousting of the law courts to revert to the real thing — or when partisans rejecting the results of a fair and free election insist on settling the matter by violence in the public arena.