Jennifer Frost is teaches US history at the University of Auckland and is the author of “Let Us Vote”: Youth Voting Rights and the 26th Amendment, forthcoming later this year from New York University Press. 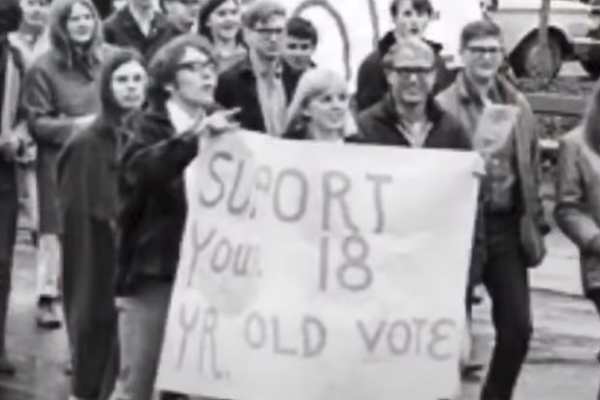 This month Congress takes up vital voting rights legislation: the For the People Act, which has already passed the House of Representatives, and the John R. Lewis Voting Rights Act.  Exactly fifty years ago, in March 1971, federal lawmakers did the same, when they debated and overwhelmingly passed what would become the 26th Amendment.  This amendment extended the right to vote to 18, 19, and 20-year olds.  It was the last time that the United States significantly expanded voting rights.

Like today, Congress was under pressure to act.  Also like today, voting rights advocates sought to ensure and expand this most fundamental right of citizens in a democracy.  But an exceptional set of developments contributed to congressional pressure in early 1971.  Most immediately, in late December 1970, the Supreme Court announced its ruling in the case of Oregon v. Mitchell, a judicial test of the Voting Rights Act of 1970.  This new Act had extended and amended the landmark Voting Rights Act of 1965.  Although the 1965 Act had enabled an estimated 800,000 to 900,000 African Americans in the South to regain their voting rights, more still needed to be done.  The 1970 Act provided a five-year extension and new coverage of jurisdictions outside the South, a national ban on literacy tests, and—most controversially—the 18-year-old vote.

This last amendment, Title III of the Voting Rights Act of 1970, guaranteed citizens 18 years old and up the right to vote in federal, state, and local elections.  It fulfilled the aim of proponents of youth voting rights, like Jennings Randolph, Democrat of West Virginia, who had been working in Congress to lower the voting age for thirty years.  Beginning in the early 1940s during World War II and lasting to the early 1970s in the context of the Vietnam War, proponents pushed for youth suffrage at the national and state levels.  Early on only a few prominent figures and organizations were involved, and only the states of Georgia and Kentucky plus Guam, American Samoa, and Micronesia had the 18-year-old vote.  But by 1969-1970, a sweeping number of state and territorial legislatures proposed lowering the voting age, and a national youth franchise movement had emerged.  “The hour is striking now for 18-year-old voting,” declared Senator Randolph.

This movement involved a broad and bipartisan coalition, formalized as the Youth Franchise Coalition.  The coalition involved Democrats and Republicans, old and young, and a range of organizations.  It included well-known, older, multi-issue organizations and groups, such as the National Association for the Advancement of Colored People and the National Education Association.  New ones driven by young Americans and dedicated solely to the issue of youth voting rights, like Citizens for Vote 18 and Let’s Vote 18, also joined.  “We can find no moral legal or political reason to justify keeping these young people on the outside of the decision-making arena of this country,” declared the NAACP’s James Brown, Jr. to a Senate subcommittee in 1970.  That year, the movement, working together with federal lawmakers in both major parties, succeeded in winning Title III from Congress.

The Supreme Court qualified this achievement.  In Oregon v. Mitchell, the justices upheld every component of the Voting Rights Act of 1970 except Title III.  At stake was the relationship between states’ rights and federal power, an issue that originated with the nation’s founding.  The plaintiffs in the case, with the state of Oregon in the lead, argued they had the right to determine the minimum age for voting in their states, not Congress.  Eight of the nine justices divided evenly, with four in favor of the states and four in favor of Congress.  In a remarkable development, the ninth, Justice Hugo Black, split the difference both ways, forming a majority of one.  Black issued the Court’s opinion that Congress could set the voting age for federal but not for state and local elections.  Designed to ensure the continued enfranchisement of African Americans, the Voting Rights Act of 1970 had enacted the enfranchisement of 18, 19, and 20-year-olds at the national level.

Yet the Oregon decision set up an untenable situation.  This situation would require a dual-age voting system in most of the country, whereby young people could vote in some but not all elections.  The situation was also contradictory.  As a founder of the Youth Franchise Coalition Paul J. Myer recalls, it would “allow 18-year-old men and women to vote for President of the United States and Congressmen, but they could not vote for the mayor or the dog catcher.”

This contradiction and the daunting prospect of two different sets of voting regulations led to the 26th Amendment.  In the early months of 1971, members of Congress, state officials, and members of the Youth Franchise Coalition mobilized to pass and ratify a constitutional amendment enfranchising young Americans.  House Joint Resolution 223 and Senate Joint Resolution 7 raced through their respective Judiciary Committees.

In March, the Senate and House debated and voted on the proposed amendment.  A pragmatic reason for passage was the cumbersome and costly burden on state and local governments of dual-age voting, but principled arguments further persuaded.  Young Americans had the maturity and education to vote.  Their participation would strengthen democracy and government in the United States.  Most fundamentally, they fulfilled the responsibilities of citizenship, especially through military service, and thus deserved the rights.  The rallying cry “old enough to fight, old enough to vote” captured this argument.

There was opposition, including those who felt 18, 19 and 20-year-olds were not yet ready for this right.  But when the House and Senate voted, the few dissenters were drowned out by unanimous approval in the Senate and a 401 to 19 vote in the House.  The amendment, stating that “the right of citizens of the United States, who are eighteen years of age or older, to vote shall not be denied or abridged by the United States or by any State on account of age,” had passed Congress.

On March 23rd, the amendment went to the states.  The speed of ratification was unprecedented.  Within three months, the required three-quarters (thirty eight states) had ratified.  Vying for first place, five states—Connecticut, Delaware, Minnesota, Tennessee, and Washington—ratified the same day Congress approved it.  Later, the states of Alabama, Ohio, Oklahoma, and North Carolina competed for the 38th spot.  The cascade of support for youth voting rights halved the record set by the ratification of the 12th Amendment in 1803-1804.  By July 1, 1971, the 26th Amendment was the law of the land.

Propelled by a youth franchise movement and pursued through coalition politics, Congress took action 50 years ago to achieve the 18-year-old vote.  Proponents sought to make American democracy more inclusive and responsive to the voices of young citizens.  In 2021, after an election season in which young voters turned out in record numbers and made a difference in key races, voter suppression efforts are on the rise across the country.  Today’s Congress has an opportunity to stem the tide.  The 50th anniversary of the 26th Amendment can serve as inspiration and impetus.