Ashley Cruseturner is Professor of History at McLennan Community College (Waco, Texas), and specializes in political history, Southern History and the Age of Jackson. 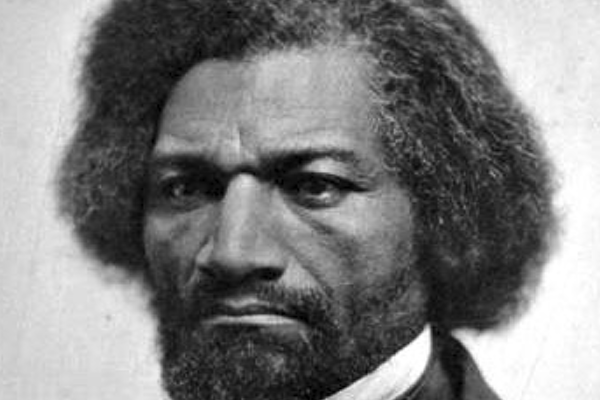 In April of 1865, Frederick Douglass addressed the Annual Meeting of the Massachusetts Anti-Slavery Society. At forty-four years of age, six-foot-one inches tall, streaks of gray emerging in his hair, Douglas still radiated strength. He stood resolute before an audience of abolitionists with whom he was popular and respected. With his intense gaze afire in triumph and alertness to an hour of opportunity, trimly bearded but still rakishly handsome, his fierce countenance attracted admirers of many stripes. As always, in this venue, he was interrupted often by applause, laughter, and shouts of approval, as he presented his powerful arguments with clever word play steeped in American popular culture: the Bible, Shakespeare, and the already sacred rhetoric of the Founders. In his prime, Douglass presented perhaps the most striking public figure ever to stride across the American political stage, every bit as compelling as iconic politicians of the television age like JFK, Ronald Reagan, Bill Clinton, or Barack Obama.

Douglass advanced his case with a series of questions.

WHAT IS FREEDOM? Speaking out against a discriminatory labor policy instituted by the Union Army ostensibly to "prepare ex-slaves to better handle freedom," Douglass called the right to choose one's own employment essential. But the bedrock of true freedom for the freedman would be "immediate, unconditional, and universal enfranchisement."

Why suffrage? Some will ask WHY DO YOU WANT IT? Invoking the language of the Declaration, Douglass simply demanded what was his by right. Any deprivation of a natural right reduced the "nature" of men. Voting represented a symbol of equality. As a result of the American founding and democratic evolution, the idea of universal suffrage defined American citizenship. In other political cultures, the denial of the "elective franchise" might do no great violence to a man. But, in our system, Douglass argued, disfranchisement equaled inferiority.

And there were practical reasons. Beyond the principle of equal rights, it was in the interest of the Federal Government to empower and enlist their Black allies in the ongoing fight to stamp out treason and perpetuate unified constitutional government. Presciently, Douglass predicted the reluctance of the South to accept the verdict of the war, predicting the United States government would find itself an occupying force in a "strange land" surrounded by a "hostile spirit" struggling to maintain order and authority.

HOW WILL YOU WIN THE PEACE WITHOUT THE BLACK MAN? Where will you find the strength to overcome the persistent spirit of the Southern rebellion? The North would need their wise and faithful Black allies, who understood clearly the war and its ultimate aim from the beginning much better than the North. African Americans had voted with their bodies, had been impervious to danger, and supported the cause of Union and freedom stubbornly and courageously as the war hung in the balance--and, truly, Douglass asserted, going forward, they represented "our only friends in the South."

To the question of INFERIORITY, Douglass acknowledged the disadvantaged political condition of Black people in America, but, asserting once again a natural right claim, he denied inferiority in any original, natural, or practical sense--pronouncing African Americans equal to "anybody on this globe." Douglass reminded his audience that slavery and oppression, historically, did not equal a racial condition but rather a function of circumstance. Were not the "blue-eyed and fair-haired Anglo-Saxons considered inferior by the haughty Normans"? "You were down then," Douglass reminded his fellow abolitionists to howls of laughter and applause. "You are up now. I am glad you are up, and I want you to be glad to help us up also."

WHAT DOTH IT PROFIT A NATION IF IT GAIN THE WHOLE WORLD, AND LOSE ITS SOUL? In addition to a practical need for African Americans to accomplish a successful reconstruction of the South, what abut HONOR? What about JUSTICE? Douglass: You asked African Americans to "incur the enmity of their masters." You induced us to "turn against the South in favor of the North; to shoot down the Confederacy and uphold the American flag." The white people of the South will hate us for generations. "You have called upon us to expose ourselves to all the subtle machinations of their malignity for all time." DO YOU NOW INTEND TO SACRIFICE YOUR FRIENDS IN FAVOR OF YOUR ENEMIES? WILL YOU GIVE YOUR ENEMIES THE RIGHT TO VOTE AND TAKE IT AWAY FROM YOUR FRIENDS? We responded to your call to arms (like we did in 1776 and 1812). "In time of trouble we are citizens. Shall we be citizens in war, and aliens in peace?"

Noting a proliferation of benevolence societies to aid African Americans, Douglas observed, "the American people are disposed to be more generous than just.” But, once again asserting a natural right claim, Douglass wondered, now that you are inarguably aware "we are men," will you deny us the "possession of all our rights?" Repudiating the poor substitutes of benevolence, pity, or sympathy, Douglass simply demanded justice.

WHAT SHALL WE DO WITH THE NEGRO? "Do nothing with us," Douglass suggested. Leave African Americans alone. Give them a chance to be men. "If you see him on his way to school, leave him alone; don't disturb him," Douglass entreated. Similarly, if you saw a Black man having dinner at a hotel, or casting a ballot, or practicing his craft, just let him be. Allow him to pursue his inalienable rights in peace. If the Black man failed, surely it would be the fault of his Maker and perhaps give lie to the universal principle of the American founding. But, Douglass was certain, if given a chance, if unbound, if allowed to succeed on his own, the Black man would prove himself equipped for citizenship and success just as much as the white man. The war [in which 200,000 African Americans served with distinction in the Union Army] swept away a "great many delusions," Douglass reminded them.

What does Douglass have to say to 2021? Should we just leave the Black man alone? Do nothing?

Conscientious historians fault modern conservatives for misusing the above paragraph to distort or even troll the African American civil rights cause over the last four decades. It is a fair point. When Douglass advised “do nothing,” he envisioned an American government that permitted African Americans to join the body politic and be subject to equal protection and due process under the law as first class citizens. When Douglass declared, “just let him alone,” he clearly imagined and advocated a passive partnership between the government of the United States and African American citizens in which access to education, the right to vote, equal employment opportunity, and public accommodations were open and equal to all.

But, instead, what Douglass feared most came to pass. After an attempt to honor their Black allies and establish justice for all, the North ultimately chose to make common cause with the white South—reneging on the promises of Reconstruction and the rhetoric of equality. The failed revolution succeeded in amending the Constitution. African Americans gained full citizenship and suffrage on paper, but, over the course of the next three decades, Douglass watched his victorious coalition of 1865 slowly but surely betray their “faithful friends.” By the time of his death in 1895, the United States had abandoned reform, left the South to the vagaries of white rule, and was fully engaged in the long nightmare of Jim Crow segregation that would last into 1960s.

Almost a century after Douglass’s speech in Boston, the March on Washington, and Martin Luther King speaking before the Lincoln Memorial, symbolizes for us a rededication to our founding principles. African American leaders once again called upon the American people to honor the Creed. After a century of discrimination, oppression, and intimidation, in a very different moment, Congress passed the Civil Rights Act of 1964 and the 1965 Voting Rights Act. Unlike the failures of Reconstruction, the twentieth century moment represented a seismic cultural shift and a great leap forward. At the very least, a great down payment on living out “all men created equal.”

An Aside. We should be honest about the progress achieved since our great civil rights moment. We merit praise not scorn for sincere repentance and 55 years of tangible achievements in cultural integration and racial unity American style. Almost inconceivably, we now live in a world in which myriad African American icons and heroes populate the uppermost elite echelons of our society: Oprah, Lebron, Barack and Michelle, Tiger, Beyoncé, Ta-Nehisi Coates, Shonda Rhimes, et al. Looking back from 2021, who are our most admired historical figures from the twentieth century? Number One (with no real competition): MLK. And the pantheon certainly includes Rosa Parks, John Lewis, Malcolm X, Colin Powell, and Jackie Robinson. In sports, Muhammad Ali has come to personify absolute excellence, integrity, and courage for the vast majority of Americans. Young people today worship a whole galaxy of African American sports stars with virtually no thought to race. Same for the arts and entertainment. No high school or college American lit survey seems complete without Toni Morrison, Langston Hughes, James Baldwin, Richard Wright, Ralph Ellison, or Maya Angelou. And, if we were enumerating heroes that one half of the nation adores but the other half detests for reasons only marginally connected to race, we would add Clarence Thomas, Thomas Sowell, Condoleezza Rice, and Tim Scott.

An Aside. We should acknowledge that there are tens of millions of white Americans who would enthusiastically vote for Tim Scott, or any other conservative black candidate, over Joe Biden, or any other white male Democrat, for president of the United States. We should acknowledge that we have utterly shattered the ubiquitous assumptions of white supremacy that barred African Americans from participating in American politics solely on the basis of race just sixty years ago. They are virtually non-existent in our current political environment.

But I HEAR YOU. This is not about Oprah or Barack Obama. Our problem is George Floyd, economic disparities including income, unemployment, the wealth gap, the inheritance gap, poverty rates, and home ownership, also disparities in health outcomes (COVID deaths) and incarceration, voter suppression, food deserts, and education. African Americans, statistically, in the aggregate, disproportionately suffer a lower quality of life in our nation compared to whites (and Hispanics and Asians).

We have succeeded in empowering the Talented Tenth of Black America. We are now happily accustomed to seeing wealthy and powerful Black people among us, enriching our culture and strengthening our economy.

I have a few ideas—and I think they are in keeping with the principles of Douglass, Lincoln, and King (without sacrificing Jefferson and Madison). Let’s talk about some possible economic and cultural solutions in my next installment, tentatively entitled, “A Just and Lasting Peace.”