What Will be the Terms of Racial Forgiveness in America? 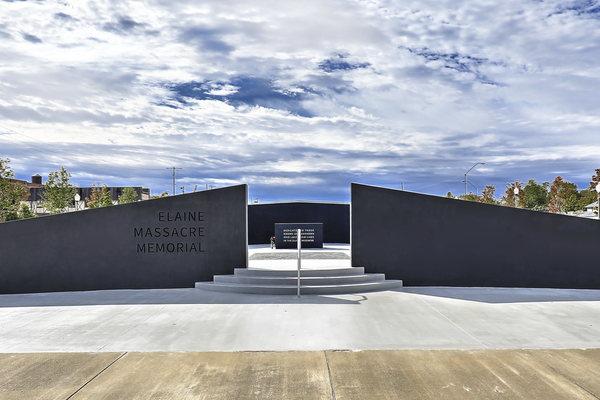 Memorial "Dedicated to those known and unknown who lost their lives in the Elaine Massacre" of September 30-October 7, 1919. Dedicated September 29, 2019.

Dietrich Bonhoeffer, the German martyr and theologian who fought against Hitler and the Nazis in his native country during the 1930s and early 1940s, defined "cheap grace" as grace without cost, as "grace we bestow on ourselves." I hear many whites today defend themselves against the fearsome appellation of "racist" by announcing that they would never think about practicing the kind of behavior, shown in recent years across this country by white nationalists.

Having taken that position to convince themselves they are not racists, they nonetheless harbor only white friends, and they also attend virtually all-white religious institutions and social clubs. They live in all-white neighborhoods, and their business partners, associates, and contacts are routinely white. When we whites vindicate ourselves from racism this way, we commit the equivalency of bestowing exoneration upon ourselves.

The hurdle is very much higher if we whites have any right eventually to receive actual forgiveness by African-Americans for our white racism, both inherited and practiced. So, what are the criteria to begin the process -merely to begin the process - that can help lead us whites toward a realistic chance for such forgiveness, and ultimately, toward a path of racial reconciliation with our Black brothers and sisters?

First, we must thoroughly acknowledge, through demonstrable and sincere acceptance, the unvarnished racial prejudice and history of 400 years in the United States - without any deflective excuse from filiopietism (excessive veneration of ancestors, the past, and tradition), too often employed to ameliorate the effects of those 400 years.

We whites must, by unfettered actions and resolute ideology, accept the truth of our illegitimate and evil white American domination of African-Americans, as manifested in our "damaged heritage" - that essence of American white racism, consisting of evidence, passed on from generation to generation, of ingrained, prejudicial customs and traditions, sometimes codified into law, and historically combined with not infrequent, gratuitous, and often severe violence and repression perpetrated by American whites against African-Americans.

We whites know what has happened through our racial subjugation of African-Americans, and we have no defensible or legitimate reason whatsoever to excuse it by benefit of prideful mythologies and endless genealogies. In a very much related thought, the philosopher Soren Kierkegaard wrote 170 years ago that one generation does not learn anything "genuinely human" from a past generation; in other words, we have to learn anew for ourselves those qualities, which constitute the "genuinely human".

Yet, those qualities that can lead us whites to the "genuinely human" to obviate our adherence to racism are not the aspects we whites have normally employed for the treatment of Blacks - rather, we have habitually relied on customs, traditions, skin color, accents, and history. But the "genuinely human" is deeper, more fundamental, instinctual as it wills a connection between us (Black and white) to understand, to empathize, to reconcile, to love, to co-inhere, to step into another's shoes and be that person. There can be no reservation about the need for this adoption, this additional and highly significant step for whites to brook.

Still, why does any white in America need to be forgiven for past racism?

Because we carry a self-destructive legacy we routinely do not even recognize, derived from white privilege and pure white domination. Since this legacy has been with us so long and it has been so thoroughly ours, most white Americans cannot perceive or appreciate its corrosive effects or consequences for others and ourselves.

While it may not have been apparent, whites always knew, but have been unable to admit that, in truth, we can only be cleansed of that legacy and its evil nature by those we made our victims: Black brothers and sisters among us. We simply do not have the resources for exerting the forceful act of truly forgiving ourselves for the accumulation of such evil displayed through white privilege and pure white domination we foisted upon African-Americans for generations.

Notwithstanding the indispensability for this cleansing of racial legacy, the steps called for here must be unilateral steps taken by whites, steps taken without expectation of anything immediate in return, but solely for the desire, for the simple purpose of demonstrating a desire by whites to express a sincere and personal mission to empathize, to reconcile, to love, to reach out to those we have egregiously and continuously harmed in body, spirit, and mind as an inhuman cudgel of national, white policy and practice.