Whataboutism Didn't Get Nixon Off the Hook. It Shouldn't Stop Investigation of the Capitol Riots

James D. Robenalt is an attorney and author of four nonfiction books, including January 1973, Watergate, Roe v Wade, Vietnam, and the Month that Changed America Forever. He lives in Shaker Heights, Ohio. 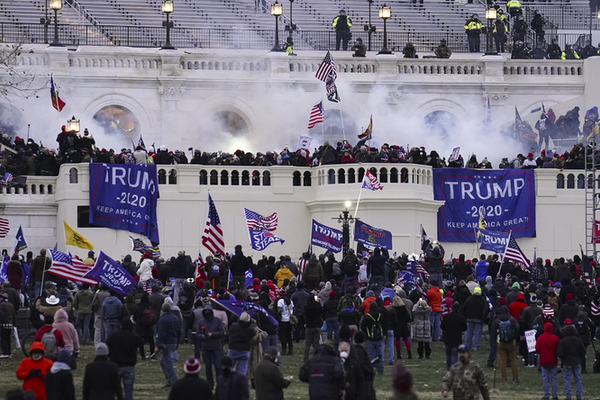 The idea of there being an equivalency—moral or otherwise—between the Capitol riot of January 6 and Black Lives Matter and Antifa street agitation is preposterous. Republican attempts to submarine the January 6 commission proposal based on the isolated incidents of urban violence that arose during legitimate citizen protest over police abuses is a complete ruse. But whataboutism is a favorite tactic of politicians who have no good response for their own malfeasance or that of their followers.

Let’s take Richard Nixon and Watergate as the example.

In January 1973, Richard Nixon faced a sticky situation. He was trying to end the Vietnam War for the United States through brutal tactics because diplomacy had failed. In December, Nixon, without Congressional approval, instituted a punishing bombing campaign of Hanoi and Haiphong Harbor to bring the North Vietnamese back to the bargaining table in Paris. The strategy was having some success, though at the expense of international outrage over the bombing of civilian centers.

Nixon wanted support from the former president, Lyndon Johnson, and reached out to him on January 2, 1973, for what would be their last phone call. Johnson encouraged Nixon to keep at it. “Well, I just feel the torture you are going through on Vietnam,” Johnson said. Nixon replied: “As you know, and I’m sure you feel the same way, we’ve got to get this finished in the right way and not in the wrong way.”

Johnson responded, almost inaudibly, “You’re doing it, and I just wish the best for you.”

The complication for Nixon was that the Watergate burglars’ trial was just about to commence in Judge John Sirica’s courtroom in Washington. Howard Hunt, one of the leaders of the burglars, pleaded guilty before the trial would start, believing he had an implicit promise of a pardon through his lawyer’s talks with Chuck Colson, a Nixon adviser. All of this seemed suspicious to Senate Democrats, including Ted Kennedy, Sam Irvin and Mike Mansfield, who were making noises of an investigation into Watergate and the political shenanigans of the 1972 campaign.

Nixon wanted a strategy to starve the Congressional appetite for a full-blown Watergate investigation. John Dean, Nixon’s White House Counsel, suggested to Nixon’s Chief of Staff Bob Haldeman that Nixon rummage around at the FBI to see if there might be corroboration to the rumor that LBJ had wiretapped Nixon’s campaign plane in the 1968 campaign. J. Edgar Hoover supposedly told Nixon after he was elected that his plane had been bugged by Johnson.

Nixon never forgot it. And now Dean was recommending they try to “turn off” the Watergate investigation by threatening to expose Democratic wrongdoing in 1968, or whataboutism.

Nixon ordered a deep dive into FBI files and had his staff contact former FBI assistant to Hoover, Cartha “Deke” DeLoach, to find out if hard evidence existed of the 1968 plane bugging. This was a dangerous game, as Nixon knew LBJ would react with anger if he found out. Nonetheless, Nixon persisted.

On January 11, Nixon asked for an update from Haldeman. John Mitchell, Nixon’s attorney general, had spoken with DeLoach, who, according to the Haldeman and an Oval Office tape, confirmed that the spying on Nixon did take place. DeLoach offered to help find confirming evidence but refused to provide an affidavit. Nixon was unhappy. “Bob, I want it from DeLoach.”

All concerned were wary of Johnson’s reaction. Schemer that he was, Nixon suggested that someone tell Johnson that the Washington Star was on to the 1968 bugging story and that together they had to squelch the story by telling Congress to back off all campaign investigations, whether of 1968 or 1972.

The ploy backfired. “LBJ got very hot,” according to Haldeman and called DeLoach and said, “if the Nixon people are going to play with this, that he would release [deleted material—national security], saying that our side was asking for certain things to be done.” Whatever the counterthreat was, it was serious enough to be classified to this day.

In the end, the gamesmanship did nothing to deter the Watergate investigation. The Senate voted in February to start its inquiry. That famous investigation, led by North Carolina Democrat Sam Irvin and Tennessee Republican Howard Baker, broke the back of the Nixon administration’s criminal cover-up of the Watergate break-in. John Dean broke ranks and testified about his own culpability in the cover-up and his warning to Nixon that there was a “cancer growing on the presidency.” Dean’s testimony was fully corroborated when the White House tapes were ordered turned over by the Supreme Court in July 1974. Weeks later, Nixon resigned.

Whataboutism is a dangerous strategy. At least in the Watergate example the two instances were of some equivalence, if true—both involved presidential surveillance that was probably unlawful. The current situation is vastly different. Comparing protest violence connected to street demonstrations might be apple to apple—for example, violence at BLM protests equated with violence by Trump Proud Boys supporters in the street protests in Washington in December 2020—these might be considered of a kind.

But a violent insurrection at the United States Capitol with the purpose of stopping Congress from certifying a presidential election is of a different character and magnitude altogether. A frontal attack on democracy is entirely different from street violence that is easily controlled by law enforcement. We have had riots in our cities and looting related to civil unrest, but we have never had the seat of government placed under siege, except in time of war with Britain in 1812.

If Republicans want to investigate street violence, they are free to look into it. But it is imperative to our very form of government that the insurrection of January 6 be completely and full investigated.