The Inferiority Complex That Put Silent Letters in English Spelling

Arika Okrent holds a PhD in Linguistics and Psychology and writes on language. Her book Highly Irregular: Why Tough, Through, and Dough Don't Rhyme—And Other Oddities of the English Language will be released by Oxford University Press on July 1. 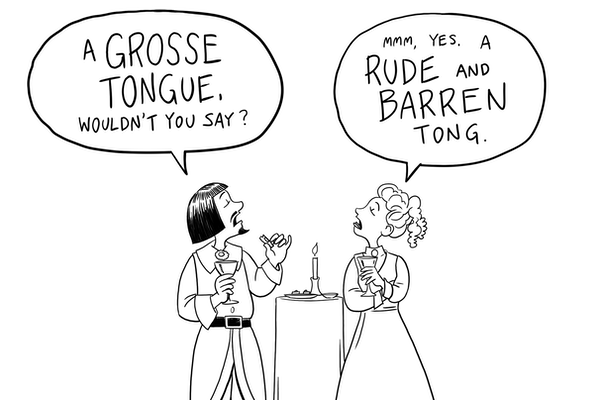 English is full of letters we write but don’t pronounce. Silent consonants got into English in a few ways. One group of them, the gnat-comb-wrist-should kind, was there in the beginning and simply kept hanging around after we stopped pronouncing them. Another group, the pneumatic-psychiatric-mnemonic kind, came in with scholarly words coined or borrowed by scholarly people using spellings from scholarly classical languages. A similar group, words of the rendezvous–faux pas–gnocchi type, were borrowed with their fancy continental spellings and maintained to display their fancy foreign origins.

origins. They were consciously added in response to a linguistic inferiority complex.

A few centuries later, the Normans had become thoroughly English. English slowly came back into writing and, especially after the printing press started churning out books, English began to flourish as a written language. But it had been dormant for a long time, so while it was robust and healthy as a spoken language, there was no trusted authority or tradition to follow when writing it. That wasn’t such a problem at first, as there was great variety in the way people approached style and spelling, but soon people felt the need for some direction.

In the sixteenth century English was held to be deficient to Latin and Greek, which learned people still studied in school. However, most of the growing reading public wanted books in English. Authors obliged but often prefaced their English works with defensive justifications for why they were writing in English and apologized for how, as one translation noted, “our grosse tongue is a rude and barren tong.”

There was a movement to bring the rude and barren tong up to snuff with some conscious attention. Writers not only began borrowing loads of Latin words like describe, deduce, and conclude, they also started going overboard with so-called inkhorn terms, Frankensteins they built from Latin pieces like addubitation (the act of doubting oneself) and honorificabilitudinitatibus (the state of being able to achieve honor). But one of the more subtle ways this urge to raise up English to a more Latin level was to add extra letters to existing words.

Receipt, salmon, and doubt came into English through French and were at first spelled in various ways that approximated how they were pronounced. Receipt (recette in modern French) might be receit, resayt, or recyte. Salmon (saumon in modern French) could be samoun, samowne, or samon. Doubt (doute in modern French) was spelled doute, dote, or even doughte in old texts.

If you were in the know— well-educated and familiar with Latin— you could see that these words traced back to the Latin words that had developed into the French words over the previous centuries. The related Latin words, receptus, salmo, and dubitare, had some extra consonants in them, but they had stopped being pronounced in French and weren’t pronounced or written in English.

But they could be! If you wanted to play up your familiarity with those classical origins, you could stick them back in. During the Renaissance, writers and translators started using more and more Latin words in order to enrich the vocabulary or just show off. They borrowed words straight from Latin like receptive and dubious. And older words that were distant relatives of those were recast in a Latin mold. Receipt gained a p, doubt gained a b, and salmon got its l.

They weren’t the only ones. Dette became debt. Endite became indict. In most cases, the Latin-inspired interloper letters remained silent, but sometimes putting them back in writing made literate people eventually start pronouncing them too. Perfect first entered English in the c-less French way, as parfit. In the late sixteenth century the Latin connection to perfectus was made explicit in the spelling, but it wasn’t until much later that people started to actually pronounce the c. Even a hundred years later it was often

pronounced as perfet. Something similar happened to adventure, which came in as aventure, and falcon, which was long pronounced faucon.

In a few cases, the urge to Latinize spellings made etymological connections that were never there in the first place. Iland, for example, was from an Old English word, igland, but in the late sixteenth century it gained an s to become island on the mistaken assumption that it had something to do with Latin insula.

Likewise sithe, from an Old English word for a cutting implement, became scythe on the assumption that it had some connection to the Latin scindere, for cut (which is a valid root in the word rescind). Scissors (formerly sisours) also got its c from a mistaken scindere assumption.

Latinized spelling was haphazardly applied and didn’t always stick. While receipt held on to its mute p, deceit could have just as well become deceipt, but though a few writers tried that out, it didn’t take. Other Latinized forms like sainct for saint (better to see the sanctus) and hable for able (connecting it back to habilis) also died on the vine.

So we’re left with silent letters that only sometimes give us a little peek at the distant history of words and where we got them. We did get a lot of words from Latin, but sometimes we forged the receipts.