Ronald A. Smith is Professor Emeritus of History at Penn State University. He is the author of The Myth of the Amateur: A History of College Athletic Scholarships, and a  co-author of an amicus brief in the recent Supreme Court case of NCAA vs. Shawne Alston. 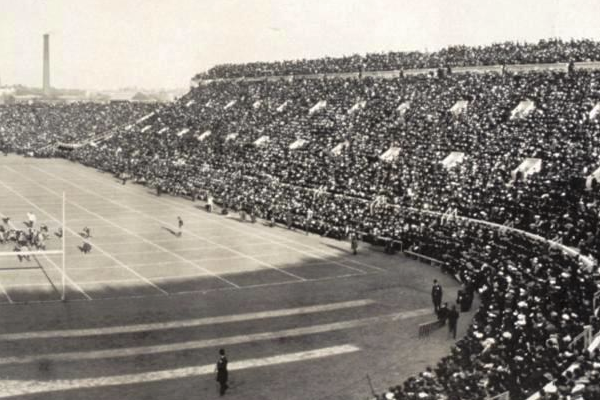 In the last days of 2020, I shared the page proofs of my book, The Myth of the Amateur:  A History of College Athletic Scholarships (University of Texas Press, 2021) with Jeffrey Kessler, the lead counsel for Shawne Alston in the NCAA v. Alston case.  In a 9-0 decision, the Supreme Court upheld the lower court’s decision and allowed college athletes to be compensated for the use of their names, images, and likenesses.  Kessler, the New York litigator, was significantly responsible for bringing free agency to players of the National Football League.  He asked me if I would prepare an amicus brief based on the history of college athletics for the Spring 2021 Supreme Court case.

In February, I wrote a preliminary draft and sent it to five historians who have researched and written on college athletics and who questioned the “amateur” myth of intercollegiate athletics.  All five, with editorial assists, agreed to sign on to the brief.  The members of the group were interesting because of their varied backgrounds.  Jay Smith is a professor of French history teaching at the University of North Carolina, Chapel Hill.  Despite writing about the pre-Revolutionary history of France, he had experienced the scandal at North Carolina in African and Afro-American Studies, in which athletes, among others, were awarded high grades for courses that required little work to maintain sufficient grade point averages to be eligible for athletics.  His book, Cheated:  The UNC Scandal, the Education of Athletes, and the future of Big-Time College Sports, was more about the considerable harmful impact on education than the exploitation of athletes.

Taylor Branch signed on because, for a long time, he saw the exploitation of athletes by the National Collegiate Athletic Association.  While Branch is best known for his award winning three-volume biography of Martin Luther King, the first of which was his Pulitzer Prize-winning Parting the Waters: America in the King Years, he had written a condemnation of the NCAA in an article in the Atlantic well before Shawne Alston began his journey to help liberate athletes from NCAA policies.

The other three signers included Sarah Fields, a lawyer and historian from the University of Colorado.  In her Female Gladiators:  Gender, Law, and Contact Sport in America, she was not sympathetic to the NCAA in its resistance to women’s participation in contact sports.  John Thelin, a noted historian of education, is author of an oft-cited critique of intercollegiate athletics in his Games Colleges Play.  Dick Crepeau has always advocated for fairness to athletes while writing two important histories, America’s Diamond Mind and NFL Football.  All five scholars contributed to the amicus brief that exposed the NCAA’s false case for amateurism and denial of fair compensation of  athletes by prohibiting property rights to their names, images, and likenesses.

The Alston case was argued before the nine Supreme Court justices in their COVID- quarantined stations on March 31, 2021 after they had received briefs from many individuals and organizations on both sides.  Jeffrey Kessler spoke convincingly for Shawne Alston as he outdueled the former U. S. Solicitor General, Seth Waxman, who represented the NCAA.  Waxman seemed distracted, possibly because it was difficult to argue effectively for a case the NCAA based on the historically false concept of amateurism.

When the justices concluded their questioning of the two sides, it appeared to me that they would likely vote 7-2 for Alston.  I thought both Stephen Breyer and Sonia Sotomayor might vote for the NCAA, probably partially basing their vote on the 1984 decision in the NCAA v. Oklahoma television case.  In that antitrust case, which broke up the NCAA’s television monopoly, Justice John Paul Stevens’ majority opinion favored collegiate amateurism.  “The NCAA,” Stevens boldly wrote, with an eye toward future legal decisions, “plays a crucial role in the maintenance of a revered tradition of amateurism in college sports.”  Even the dissenting opinion of Justice Byron “Whizzer” White added strength to the unverified myth of the amateur.  White had been an all-American football player at the University of Colorado in the 1930s, and he stated that the NCAA had a “fundamental policy of preserving amateurism and integrating athletics and education.”  These important comments on amateurism, however, were not based upon fact, and that is where my mining of archives of 80 university libraries over the past half century may have been important to the U. S. Supreme Court’s unanimous decision.

In the first five pages of the Supreme Court decision, my historical work from archives was noted to the detriment of the NCAA case against the former West Virginia student, Alston.  In my just published The Myth of the Amateur, I have written about the first American intercollegiate contest, a crew meet between Harvard and Yale in 1852, nine years before the Civil War.  The crews from the two elite schools were given an all-expense paid vacation for eight days at New Hampshire’s Lake Winnipesaukee by a railroad magnate, if they would row a couple times. I first told this story in a 1988 volume, Sports and Freedom:  The Rise of Big-Time College Athletics.  The athletes were well-paid at mid-nineteenth century, and they were again a half-century later.

Football was the dominant sport by the early twentieth century.  My story of Yale’s all-American, James Hogan, was repeated in the Supreme Court opinion written by Neil Gorsuch.   Yale and other leading institutions in intercollegiate athletics were part of the decadent period of amateurism when Hogan was likely the best-paid player in America and Yale was the “jock” school of America.  Hogan, called “Yale” by adoring students, was paid in several ways as an “amateur.”  He resided in a suite in Vanderbilt Hall, the most luxurious of Yale’s dormitories, ate free meals at the University Club, had his tuition paid, and received a scholarship of one hundred dollars each year.  More than that, Hogan and two others had the privilege of receiving the entire profits of selling score cards at popular baseball games.  As an entrepreneur, using his “name, image, and likeness,” he became an agent for the American Tobacco Company, for which he earned a commission for each packet of cigarettes sold in New Haven.

Following his successful captaincy of the 1904 football team that defeated both Harvard and Princeton, Hogan was given a ten-day vacation in Cuba with all expenses paid by the Yale Athletic Association.  Walter Camp, the famed Yale leader and “father of American football,” oversaw Yale’s athletic “Financial Union,” from which Hogan’s Caribbean junket was paid.  Camp recorded the trip under “miscellaneous expenses.”  The established Eastern universities were teaching a lesson to those in the West and South on how to conduct “amateur” sport in American institutions of higher learning.  The U. S. Supreme Court justices, more than a century later, could see that amateurism was suspect from historical research and applied it to a unanimous decision opposing the NCAA.

In his opinion, Justice Gorsuch continued detailing historical events that proved the myth of the amateur.  He recounted, drawing on our historical research, the shifting definition of amateurism under the NCAA, and the ways in which the NCAA and administrators and coaches of athletes have benefitted from the commercial nature of college sports.  At the same time, the financial rewards to athletes from their names, images, and likenesses have been denied.

It may not occur regularly, but historians sometimes have a major impact on current issues.  Our amicus brief appears to have had such an outcome.