Yanek Mieczkowski is a presidential historian and the author of Eisenhower’s Sputnik Moment:  The Race for Space and World Prestige, Gerald Ford and the Challenges of the 1970s, and The Routledge Historical Atlas of Presidential Elections. 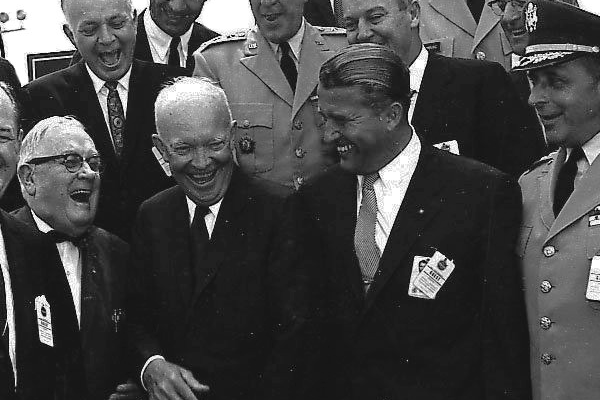 Dwight D. Eisenhower, the five-star general and 34th president who was honored in 2020 with a new memorial in Washington, would watch keenly the latest Space Race, which capitalizes on private enterprise’s ingenuity and financial heft.  Within just ten days, billionaires Richard Branson of Britain and Jeff Bezos of the U.S. launched themselves beyond the earth’s atmosphere, touching the fringes of outer space.  Their flirtations with space attracted worldwide attention and generated speculation that more commercial companies—including Elon Musk’s SpaceX—will hurl humans to the heavens.

In 1957, the original Space Race started when the Soviet Union launched the world’s first satellite, Sputnik.  Critics charged that President Eisenhower was apathetic, but he resisted calls to view space exploration as a race and responded cautiously, building America’s efforts by steady increments.  The strategy seemed to work.  By the time Ike left office, the U.S. had launched 31 satellites, while Russia had just nine.  But in the Cold War climate, space became politicized, and members of Congress and the media clamored for massive spending on space projects.

Eisenhower wanted to avoid that, and his reasons resonate today.  He feared mushrooming government growth, and while the Cold War Space Race showcased capitalism’s superiority over Communism, the irony was that government—rather than the private sector—directed and underwrote U.S. space efforts.  In his Farewell Address, Eisenhower coined the term “military-industrial complex” to warn about the burly ligament binding government and the armaments industry, warping the economy, but the potential for a “space-industrial complex,” with large public contracts doled out to aerospace concerns, was just as real.

Government spending brought other perils.  One was inflation.  While campaigning for president, Eisenhower showed inflation’s dangers by sawing off sections of a board, telling crowds that inflation could similarly cut down the dollar’s value.  Today, inflation again threatens; in June 2021, the Consumer Price Index rose 5.4 percent, the largest spike in thirteen years.  One key to taming inflation is restraining government spending, and Eisenhower did that throughout his presidency.

Eisenhower also wanted to check government spending to minimize the federal debt.  Repeatedly, he issued alerts about the ticking debt bomb that would explode on future generations of Americans.  The massive federal debt the U.S. was accumulating, he warned, “is going to be a hundred times worse for our children and our grandchildren, unless we stop it.”

Now is the era of Eisenhower’s grandchildren, and his words seem prophetic.  In the 1950s, the federal budget was only $80 billion, with deficits just over $1 billion—and Eisenhower even presided over three budget surpluses.  By contrast, for fiscal year 2020, the federal budget was $4.8 trillion, and the deficit was $3.1 trillion.  Eisenhower would be horrified.  If he were president, every government agency’s budget would be on the chopping block, including that of NASA, which he helped to create and which became the cutting-edge outfit to probe the final frontier.

So Ike would be pleased at the accomplishments of Bezos and Branson, which avoid increased government spending and showcase the private sector’s initiative.  Americans like Bezos and Musk demonstrate the country’s know-how, resources, and willpower to send satellites and humans skyward.  Sending humans into space especially draws the media spotlight and bolsters America’s world prestige.

That was a vital aspect of the Cold War Space Race.  It was a “prestige race,” helping to determine which superpower—the U.S. or the U.S.S.R.—would generate the greatest global standing and followers, a contest spilling into other venues, including the Olympics.  Initially, Eisenhower denied that space exploits enhanced world prestige.  He instead cited more mundane metrics, like industrial and agricultural productivity and a robust consumer goods market.  He was right, but had he lived to see the Apollo landings, he might have conceded that spectacular human space adventures boost a nation’s image by inspiring people and stoking admiration worldwide.

The world saw that this July.  After Bezos’s flight, The Australian news agency trumpeted, “Space Tourism Takes Off,” calling it “a key moment” for a new industry.  Such success burnishes the reputation of the U.S., a nation Eisenhower loved so much that he devoted his career to serving it, once telling his wife Mamie, “My country comes first and always will.  You come second.”  He would have reveled in the media plaudits that commercial space achievements generate, reflecting the American virtues and ingenuity he believed in so much.

Eisenhower would flash his famous grin at this new Space Race.  He would like it indeed.