In California Recall, a Tiny Minority of Voters Could Choose the Governor 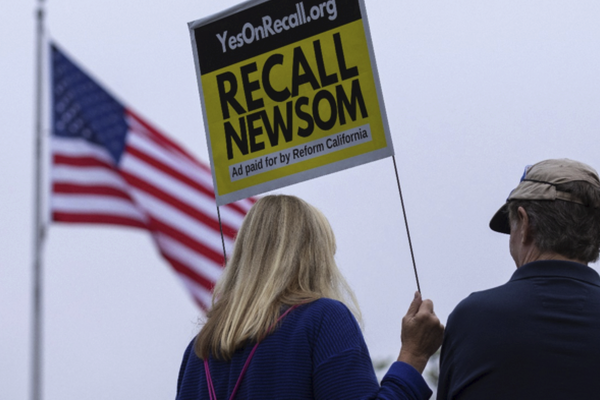 California Governor Gavin Newsom could be replaced by a Republican who wins under 20% of the vote – a fact that the Los Angeles Times called “undemocratic” and just plain “nuts.”

Recent polls of “likely voters” show a close race, with 51% wanting to keep Newsom in office while 47% favor a “yes” vote to remove him.

The recall election will be held September 15, by mail-in ballot. If the recall question wins a majority, then one of the 39 opposition candidates on the ballot will be elected to replace Newsom. Currently, the leading Republican candidate is Larry Elder, a Black talk show host with a nationally syndicated program. He is drawing 18% in the polls, The next two candidates are former San Diego Mayor Kevin Faulconer and businessman John Cox, both with around 10%.

In a recent editorial, the Times called the current recall system “perilous for the state’s stability.”

It pointed out that “In other California elections, including special elections triggered by the death or resignation of an incumbent, a candidate cannot win without the support of a majority of voters.” In those elections, if a candidate doesn’t win 51% of the vote, the top two vote-getters face a run-off election. The recall election skips this step and could allow a challenger with only a tiny percentage of the vote to become governor.

Erwin Chemerinsky, the dean of the U.C. Berkely School of Law, in a New York Times editorial, has called the recall election “unconstitutional.” He argued that “every voter should have an equal ability to influence the outcome of the election.” Newsom could garner millions more votes that the Republican challenger and still lose office.

Chemerinsky cites two 1960s U.S. Supreme Court cases that guaranteed the principle of “one-person, one-vote. He called for federal lawsuit to be filed if Newsom is recalled, but admitted that the current Supreme Court would be unlikely to take it up.

In Michigan, for example, a half-dozen groups have started petition drives to recall Governor Gretchen Whitmer (D), but none have met the 25% signature requirement.

Newsom started out the year with strong positive numbers, as the state emerged from the first COVID lockdown and mask requirements were lifted. In recent weeks, as the Delta strain swept over the state, his poll numbers dropped. The governor has required that all state employees and all public school teachers get vaccinated and that K-12 students wear masks in the classroom. Most major counties, including Los Angeles and San Francisco, have implemented mask requirements for all indoor activities.

“It’s going to be very difficult for any Republican candidate to beat Gavin Newsom. But COVID sure can,” noted Dan Schnur, a politics professor at the University of Southern California.

The governor enjoys a huge advantage in fundraising with more than $47 million in his war chest. Larry Elder, the leading Republican, has raised some $5 million.

Newsom’s contributors include many of the state’s labor unions, Indian casinos, and many business organizations including the Building Industry Association and the California Association of Realtors, A number of wealthy Democrats have also contributed, including Reed Hastings, the founder of Netflix, who donated $3 million, and Laurene Powell Jobs, who contributed $200,000.

Newsom’s strategy so far has been to frighten Democrats and independents by portraying the recall as “power grab” by Trump Republicans who want to roll back the state’s progressive policies. Trump is extremely unpopular in California, a state he lost to Biden by 64% to 34% in 2020.

The emergence of Larry Elder as his leading opponent, rather than former San Diego Mayor Kevin Faulconer, a liberal Republican, may benefit Newsom. Elder is an enthusiastic Trump supporter and in the past has denied climate change and advocated overturning Roe v. Wade and abolishing the minimum wage.

In a 2000 magazine column, Elder wrote that Democrats had an advantage over Republicans because they were supported by women and “women know less than men about political issues, economics, and current events.”

Democrats hold a 2-1 registration advantage over Republicans and Newsom supporters hope that Elder’s conservative, libertarian views will motivate Democrats to complete their ballot and mail it in.

TV celebrity Caitlyn Jenner, who made a splash when she entered the race last year, has failed to impress likely voters and now registers only 3% in recent polls.

What if Recall Wins?

What happens if the recall succeeds, and a Republican becomes governor?

It would probably ignite a year of high-profile clashes but little lasting change. Democrats would still hold veto-proof supermajorities in the state Assembly and Senate, meaning they could still pursue their own legislative agenda and deny the new governor funding.

If a Republican is chosen, he will face very long odds to be re-elected in the November 2022 election. No Republican has won the governorship since 2006, when incumbent Arnold Schwarzenegger was reelected after first taking office in the 2003 recall. Currently, Democrats hold all the statewide offices.

According to Thad Kousser, U.C. San Diego political science chair, if a Republican wins, it would amount to “a one-year political earthquake.”