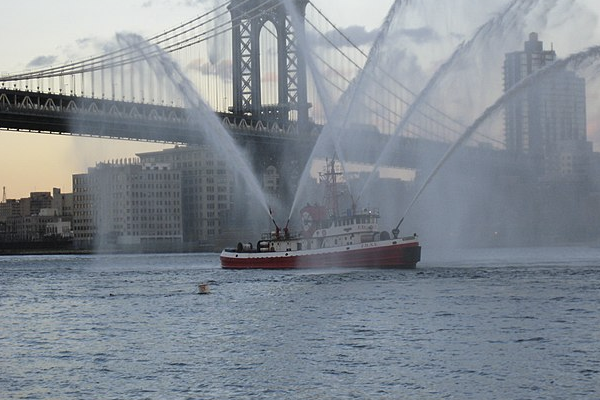 Editor's Note: The Retired FDNY Fireboat John D. McKean was pulled into emergency service on September 11, 2021 supporting firefighting with its still-functional pumps and transporting evacuees from Manhattan. The McKean and its crew are discussed in this week's essay by Jessica DuLong on the 9/11 boatlift.

New Yorkers and visitors to the city will have the opportunity this month to visit the retired FDNY Fireboat John D. McKean at the Hudson River Parks Friends' Pier 25 in lower Manhattan. The McKean will be available to visitors and for public and private rides in New York Harbor.

The McKean was purchased at auction in 2016. In 2018, the Fireboat McKean Preservation Project was formed with the mission of preserving this historic vessel for museum and educational purposes. In 2019, the McKean underwent major repairs to its hull at the North River Shipyard in Upper Nyack, NY, with subsequent restoration of the ship's above-deck areas. Through the Hudson River Parks Friends, the McKean will be able to dock at Pier 25 to be in proximity to lower Manhattan for the 20th anniversary of the attack on the World Trade Center on September 11, 2011.

John D. McKean was a marine engineer aboard the Fireboat George D. McClellan when he was fatally burned by a steam explosion in 1953. Despite his injuries, he kept his post to help bring the ship in safely. An already-ordered but yet-to-be commissined fireboat was named in his honor the following year. John McKean's spirit was reflected in the vessel's service supporting firefighting and transporting evacuees on September 11. The McKean was also used to fight the 1991 Staten Island Ferry Terminal fire and assisted with the rescue of passengers of the US Airways Flight 1549 Hudson River landing executed by pilot Chesley "Sully" Sullenberger in 2009.

For more information, go to www.fireboatmckean.org .