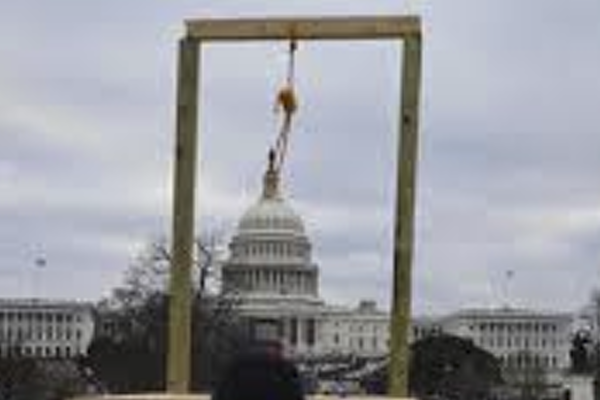 In June 1858 Abraham Lincoln, the just-nominated Illinois Republican candidate for U.S. Senate, told delegates, “a house divided against itself cannot stand. . . . This government cannot endure, permanently half slave and half free.”

In mid-May 2021  a Reuters-Ipsos poll indicated that 53 percent of Republicans thought that Donald Trump was the “true president,” and 61 percent of them believed that the 2020 election was “stolen” from him. Two weeks later more than 100 scholars had already signed a statement that read, “we . . . scholars of democracy . . . have watched the recent deterioration of U.S. elections and liberal democracy with growing alarm.” They also noted “the current hyper-polarized political context” and that bipartisanship “is sadly lacking.” In that same week journalist Ronald Brownstein wrote, “Bill by bill, this year’s red-state offensive is measuring the continued unraveling of a country that appears to be unrelentingly pulling apart.”

The “house divided” that Lincoln spoke of in 1858 led within three years to the Civil War (1861-1865). Since then, our “house,” our country, has arguably never been as divided as it has since last November—the Trump-followers’ siege of the U. S. capitol building on January 6 being the most striking sign.

How, or if, this extreme division will end, end short of civil war, history cannot tell us. President Obama liked to quote the words of Martin Luther King, Jr., who said “the arc of the moral universe is long, but it bends toward justice.” But Obama was (and is) an optimist. There is no guarantee that our future will improve. Knowledge of the past cannot reveal future winners and losers. It can, however, illuminate the contested playing field. As psychologist and futurist Tom Lombardo wrote in Future Consciousness: The Path to Purposeful Evolution (2017), “Memory of the past . . . is the knowledge foundation for both present and future consciousness, as well as wisdom.”

Thus, in the remainder of this essay, we shall look back at historical highlights of the ongoing struggle between unity and polarization. In a follow-up piece, “A House Divided: The Future,” we will examine some of the roadblocks confronting unifiers and consider some possible solutions.

From the earliest stages of our existence as an independent nation, the importance of unity was stressed. In his farewell address to the nation (1796), President Washington stated “the unity of Government . . . is a main pillar in the edifice of your real independence.” But he warned against enemies that would seek to deemphasize the “immense value” of such union, against “the baneful effects of the spirit of party,” and against “the alternate domination of one faction over another, sharpened by the spirit of revenge.” Such a spirit, he stated, “agitates the Community with ill-founded jealousies and false alarms; kindles the animosity of one part against another, foments occasionally riot and insurrection.”

Although President Lincoln abhorred slavery, in the early days of the Civil War (August 1862) he wrote, “My paramount object in this struggle is to save the Union, and is not either to save or to destroy slavery. In 1865, after further developments including the Emancipation Proclamation, he stated that the war effort had to be completed and “the nation’s wounds” bound up.

Despite the Civil War ending later that year, deep divisions continued. Our wounds were bandaged over, but not healed. In his The Upswing: How America Came Together a Century Ago and How We Can Do It Again (2020), Robert Putnam views the post-Civil War Gilded Age as a time when “inequality, political polarization, social dislocation, and cultural narcissism prevailed.”

But then around 1890 the Progressive Era began, in which “institutional, social, and cultural seeds” were planted (by various individuals including both Republicans and Democrats). Out of those seeds, according to Putnam, emerged more than six decades (lasting until the late 1960s) of “imperfect but steady upward progress toward greater economic equality, more cooperation in the public square, a stronger social fabric, and a growing culture of solidarity,” in which we “became more focused on our responsibilities to one another and less focused on our narrower self-interest.”

The Progressive Era, which lasted until about 1914, arguably moved us forward toward a less unequal and fractious society in many respects, though this was also the nadir of American race relations, as southern states consolidated Jim Crow and northern and western towns and cities established patterns of residential segregation. Later revivals of progressivism would have to deal with this toleration of racism. But by 1933, after three successive Republican presidents beginning in 1921, the USA was facing  what historian Robert Dallek describes as a widening “cultural divide,” Franklin Roosevelt (FDR) began pulling us out of the Depression by renewing the Progressive tradition. And he did so based on “shared support from every region and every ethnic, religious, and racial group.” In the 1936 election he won 46 out of 48 states, losing only in Maine and Vermont. His New Deal policies to combat the Depression gave people hope.

In 1964, President Lyndon Johnson (LBJ) did almost as well as FDR.  He carried 44 of 50 states and won the largest percentage of the popular vote in over a century. Pushed by the movement led by MLK and others, he marshaled support for and signed into law the Civil Rights Act (1964) and the Voting Rights Act (1965), and by executive order he required government contractors to “take affirmative action” in regard to hiring and employment. Between LBJ’s policies and the work of local voting rights activists , the percentage of black registered voters increased almost tenfold in Mississippi and more than threefold in Alabama between 1964 and 1969.

Yet, the overwhelming support received by FDR in 1936 and LBJ in 1964 was deceptive. Beneath the surface lay a festering, unresolved wound that the Progressive tradition, including FDR and LBJ, failed to heal--U. S. racism. Today, despite a few positive signs like making Juneteenth (19 June) a federal holiday to celebrate the end of slavery, the wound continues to fester within our national body.

In 1936 the South--where despite some migration northward, Blacks overwhelmingly lived--was still plagued by segregation, including segregated schools, churches, housing, restaurants, bars, hospitals, barber shops, public transportation, and restrooms. The Supreme Court ruled segregation legal in 1896, and did not reverse its decision until 1954. In addition, other African-American rights were often denied, including the right to vote.

Mainly because FDR was unwilling to alienate too many southern White voters by attacking racist evils, he (in the words of historian Dallek) “never went out of his way to work especially hard for African Americans.”

In addition post-Civil-War Blacks faced many other evils, including the Ku Klux Klan (KKK) and lynchings. After the Northern-imposed Reconstruction Era ended along with the presidency of the KKK-suppressing President Ulysses Grant, Southern terrorism, briefly contained, roared back. Between 1877 and 1950, over 5000 “racial terror lynchings” occurred, overwhelmingly in the South.  Meanwhile, in 1915, the KKK was reborn and flourished until the mid-1920s, when its total U. S. membership totaled 4-5 million.  In Indiana alone in 1925, over a quarter of native-born, white males belonged to the Klan.  According to historian Thomas R. Pegram, “the bedrock of the 1920s Klan movement remained its commitment to the continuation of native-born white Protestant hegemony in American culture and governance.”

The six states that LBJ’s opponent, Barry Goldwater, carried in 1964 were all, except for his home state of Arizona, in the Deep South.  In 1972 and 1984, the Republicans Richard Nixon and Ronald Reagan did even better in the South, winning all of the southern states (and in each election 49 states in all).  The continuing dominance of Republicans in that region was once again demonstrated by Donald Trump in 2016, when he carried all the former Confederate states except Virginia.

The views of many Southern Whites--especially older male non-college graduates in small towns and rural areas--are shared by many males with similar backgrounds in other parts of our country. In 2016 writer George Saunders wrote that many Trump supporters suffered from what he called “usurpation anxiety syndrome,” which he defined as “the feeling that one is, or is about to be, scooped, overrun, or taken advantage of by some Other with questionable intentions.”

That “Other” might be anyone benefiting from Affirmative Action, which many male Whites believed disadvantaged them. Their view was contrary to that expressed by President Lyndon Johnson in 1965, who sought “not just equality as a right and a theory, but equality as a fact and as a result.” Many white males, however, resisted his  “compensatory” view of equality. Thus, when Donald Trump competed for the presidency in 2016, their decades-long resistance found its champion.

By then, 65 percent of Whites without college degrees “believed that America’s culture and way of life had changed for the worse since the 1950s.” Yet, few of them admitted that the position of Blacks was far worse--or if grudgingly half acknowledging it, might say it was their own fault. But whatever the causes, on average Blacks died younger, had less education, earned less, and were more likely to be unemployed, harassed by police, and incarcerated.

Both political scientist Putnam (see above) and historian Jill Lepore believe that political polarization has increased during the last half century. Lepore thinks the rise of cable news in the 1980s and 1990s, especially the 1996 launching of the contrasting left vs. right MSNBC and Fox News, was especially significant. So too was the rise of the Internet and social media.  She adds that the latter, expanded by smartphones, “provided a breeding ground for fanaticism, authoritarianism, and nihilism,” and it “exacerbated the political isolation of ordinary Americans while strengthening polarization on both the left and the right.”

During the last decade, polarization has been increased by growing distrust in scientific findings in regard to such areas as climate change and coronavirus research. And Donald Trump has certainly fostered such distrust and undoubtedly made us a more divisive country. Meanwhile, White resistance to Affirmative-Action minority “advantages” has remained central.

A June 2021 government report on domestic terrorism declared, “Among that wide range of animating ideologies, racially or ethnically motivated violent extremists (principally those who promote the superiority of the white race) and militia violent extremists are assessed as presenting the most persistent and lethal threats.” Yet, as on so many other questions, reactions to such a claim were split.  A month earlier polling data indicated that while 84 percent of Democrats believed that white supremacy was the most lethal U. S. terrorist threat, 88 percent of Republicans disagreed.

Thus, although not our only polarizing problem, our central one has been our failure to agree on which kind of country we wish--one in which Christian white men dominate or the type of society described by abolitionist Frederick Douglass in a Boston speech of 1869, one “of perfect civil equality to the people of all races and of all creeds, and to men of no creeds.”