What "Forget the Alamo" Forgets

James W. Russell (jameswrussell.com) is the author of Escape from Texas: A Novel of Slavery and the Texas War of Independence (escapefromtexas.com) and eight other books. His most recent is The Labor Guide to Retirement Plans (Monthly Review Press). 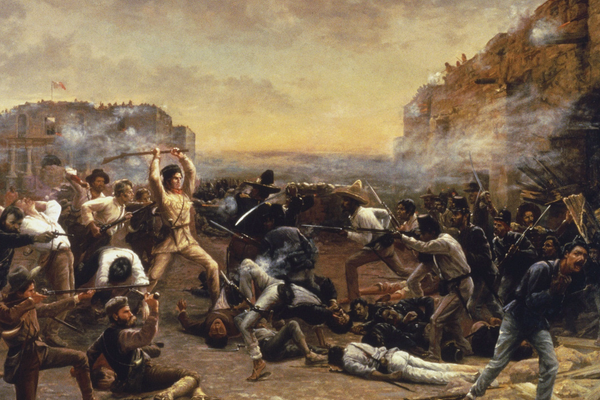 Davy Crockett depicted in The Fall of the Alamo (1903), Robert Jenkins Onderdonk.

Each year before the pandemic over two and one-half million people visited the Alamo in San Antonio, Texas. Widely portrayed as a shrine to freedom, it is the site of an early battle of the Texas War of Independence where Mexican troops, led by President and General Antonio López de Santa Anna, defeated and killed some 189—the exact figure is in dispute—independence fighters, including frontier icons Davy Crockett, Jim Bowie, and William Travis. “Remember the Alamo” became the revenge slogan that presumably drove other independence fighters led by Sam Houston six weeks later to definitively defeat Santa Anna’s troops at the Battle of San Jacinto and secure Texas independence.

The Alamo is at the center of the Texas creation story, purportedly a symbol of courage in the willingness to fight to the end for a noble cause, to secure freedom from Mexican tyranny.

Left unsaid, though according to many historians, is that the real goal of Texas independence was to protect a slave system that was under threat of abolition by the Mexican authorities. They had abolished slavery in the rest of the republic in 1829 under President Vicente Guerrero, only reluctantly agreeing to an exemption for Texas that Stephen Austin had traveled to Mexico City to secure. If the Alamo is a shrine to freedom, it was freedom for the Texas slave owners to continue and expand their system.

Along comes Forget the Alamo by three Texas writers: Bryan Burrough, Chris Tomlinson, and Jason Stanford. They seek to set the record straight by lampooning the Texas foundation myth—hence the book title that mocks one of the central patriotic slogans in not only Texas but also American history. They show the importance of slavery and that Mexico was opposed to it. Santa Anna spared the lives of the three slaves at the Alamo. They deflate the images of Bowie and Travis, who were slave owners, and Crockett who surrendered rather than going down fighting. Most importantly, they show how the myth was embellished over the years until Hollywood got into the act with Walt Disney’s Davy Crockett television series in the 1950s and a movie starring John Wayne as Crockett in 1960.

They make the connection between a generation of faux coonskin cap-wearing boys, raised on the Alamo myth via Disney’s Crockett, who would later become American troops in Vietnam, thinking, at least initially, that they were somehow remembering the Alamo in fighting against a communist-led foe.

In some respects, their study of what Hollywood did with the Alamo story is reminiscent of the work of sociologist Jerry Lembcke who has written about the distorted ways in which Hollywood films portrayed the Vietnam War.  In both cases—the Alamo and Vietnam—Hollywood on balance embellished a patriotic myth which motivated America troops for future wars.

Like with Lembcke’s work, the authors distinguish between the war and the memory of the war, a point also made by Viet Thanh Nguyen when he states that every war is fought twice, first on the battlefield and then in memory.

In the case of Texas, there is an ongoing memory struggle between those on the right who wish to keep the Anglo hero narrative myth intact and revisionist reinterpretations. Cross-cutting that is a division between how Anglos and Mexicans who live in Texas view the event.

The authors show how the prevailing Anglo heroic narrative has been used to oppress Mexican-American school children, who were taught to see themselves as the enemies of the freedom-fighting Texans. Their “revisionist” solution is problematic, though. They point out that there were Mexican residents of Texas, called Tejanos, who sought independence alongside the Anglos and that nine of them died at the Alamo. Ergo, Mexican schoolchildren now have their own Texas independence heroes. The problem with that liberal formulation though is that, while it is true that some Mexicans did side with the Anglos, it was a very small proportion of them.

Table. Anglo and Tejano Distributions in Texas in 1836

Note: In addition to Anglos and Tejanos, there were 5,000 Black slaves and 14,500 Indians in the Texas population, none of whom died at the Alamo.

The Tejano casualties at the Alamo were less than half the proportion of Tejanos in the Texas population. The disproportion is even greater when considering that Bexar, the former name of San Antonio, had the largest concentration of Tejanos in Texas. Quite clearly, the majority of them stayed away from the Alamo those fateful days.

Tejanos who sided with the slave holders are given a pass from criticism in the book. Instead, the authors seem to celebrate them as Texas minorities to look up to. That seems to be for the authors a main corrective to the Anglo hero narrative.

To be fair, the authors do state that the Tejano independence fighters were motivated by wanting autonomy from Mexico City and not the preservation of the Anglo slave system. But does that really get them off the hook from being accomplices of slavery? It’s similar to maintaining that many Southerners were fighting for independence rather than slavery in the Civil War when the two were inextricably bound together in consequence.

Were the Tejanos who supported Texas independence admirable role models for Mexican-American schoolchildren today, as implied by the book, or a minority of Tejanos who collaborated with the Anglos and abetted their plan to establish a slave republic and ultimately with the growth of American imperial power?

The authors do not cover other Tejanos who resisted the independence nor those to participated along with escaped slaves and Indians in guerrilla skirmishes afterwards against the new authorities.

Nor do the authors question Texas being taken from Mexico and becoming the stepping stone to taking the whole Southwest twelve years later when U.S. troops invaded Mexico in the Mexican-American War.

On balance, Forget the Alamo is well worth reading for what it gets right as well as what it adds about the continuing struggle over the Alamo narrative in Texas. But it is, ultimately, a book written within the constraints of an American unwillingness to fully deal with the historical reality that the United States forcibly stole Texas and the rest of the Southwest from Mexico in two wars that have had great continuing consequences for the futures of both countries.