Can Libya's Elections Lead to a Second Chance at Stability and Engagement with the World?

Luiza Carter was a strategic communications advisor throughout the Middle East prior to joining the U.S. Department of Defense, to include political-military advisory work in Afghanistan. She received an MA in International Security Studies from Columbia University and a BA in Political Science from Pace University after personally witnessing the events of 9/11 in her home of downtown Manhattan.

The views and opinions expressed in this article are those of the author and do not necessarily reflect the official policy or position of any agency of the U.S. government. 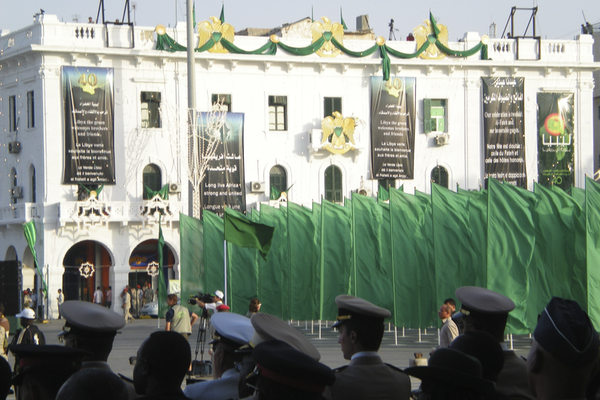 The 2009 "Celebrate Libya" public relations campaign proved a premature celebration of the nation's entry into the community of nations. Photo by author.

Ten years since the death of its infamous Colonel and seventy years after the UN created an independent and sovereign Libyan state from former Italian colonial possessions, the country was to stage its first presidential election. On December 24, 2021, Libyans were to register their preference for one of 98 registered candidates, including two women. And for the second time in its recent history, Tripoli had the opportunity to emerge from its embattled past and embrace the international community.

In September of 2009, my job was to make a notorious African dictator of a pariah state look redeemable. The grand celebrations would commemorate the 40th Anniversary of Muammar Al Qaddafi’s revolution – and a reopening to the world through the ‘Celebrate Libya’ public relations campaign. Although my team was hired by Libya’s government to sell the ruler’s reformed image and the vast investment opportunities the country presented, we genuinely wanted to believe Libya ‘readied to take center stage’ (as my first press release excitedly claimed). Foreign dignitaries descended to experience hundreds of performers on one of the largest tent-like stages ever constructed. In downtown Tripoli, a military parade involving troops from countries across the world showcased Libya’s (arms control-compliant) missiles. In nearby Ghadames, the largest fleet of hot air balloons launched from the desert exhibiting all 40 flags of the African Union. During the celebrations, I sat captivated by the Gipsy Kings’ performance at Sabratha’s 1,800-year-old amphitheater (one of the world’s best preserved ancient Roman sites), and I believed this country, which had been shut off from the world for decades could soon drastically change – for the better.

To the skeptics, at this point Libya presented substantial opportunity for global investors and tourism. Six years earlier, the UN Security Council lifted sanctions imposed after the Lockerbie bombing. Off limits to most Americans and Europeans since the mid-1980s, the Libyan government anticipated tourist arrivals to reach ten million by 2020 and major contracts for hotels to accommodate them were increasingly underway. The sanctions left the country’s numerous UNESCO World Heritage sites hidden and magnificently preserved.

The country was ranked second wealthiest in Africa and the continent’s largest oil producer, along with Nigeria. Unaffected by the global economic crisis, its GDP had reached almost $90bn. International investors had been eyeing the ‘Gateway to Africa’ and its emerging industries such as its highly promising and largely unexplored hydrocarbons.

After decades of estrangement from the West, relations were warming up as well. There was even an exchange of ambassadors with the US, after 35 years. Ironically, not too long after, it would also be the country where a US Ambassador was killed for the first time since 1979. Libya had proven its readiness to ‘rejoin’ the international community.

It was a nation with much to offer. Until the Arab Spring. Until Benghazi. Until ISIS. Until the region’s unceasing winds of turmoil engulfed this land in a sandstorm it’s only now beginning to emerge from.

Today, Libya’s GDP sits at a mere $25B, a fraction of what it once was and nowhere near the top ten of the continent’s wealthiest. Its historical sites remain standing, albeit with widespread damage resulting from militant training camps established among ancient amphitheaters and colonnades. The country still possesses the largest oil reserves on the continent. And last October, a ceasefire was negotiated prompting the Government of National Unity (GNU)’s subsequent formation. Foreign embassies reopened.

The critical next step was to be the first round of Presidential elections. Among the high-profile contestants were Agiula Saleh (Parliamentary Speaker), Abdul Hamid Dbeibah (Interim Prime Minister and head of Libya’s National Unity Government) and Gen. Khalifa Haftar (the deceased Qaddafi’s rival and head of the Libyan National Army). Although initially disqualified for a war crimes conviction, the former dictator’s son, Saif al-Islam, had also been deemed eligible to run and garners the support of those nostalgic for his father’s relatively peaceful reign.

Each contestant commands geographic allegiance among population segments and all possess extensive ties to former regime power networks. Their victory would be decisive not only domestically, but internationally as external actors have long exploited the power vacuum by promoting disorder through foreign intervention. In the east, Gen. Haftar is supported by France and Egypt, along with the UAE and Russia who exacerbate the fighting through reportedly financing the shadowy Wagner Mercenary Group’s local militants. Opposition is led by Turkey, Italy and Qatar who provide military support to Dbeibah’s UN backed Government of National Accord in the West and Tripoli.

Unfortunately, bitter disputes over the electoral process laws led to Libya’s election commission postponing the vote only two days prior to it taking place. Reasons cited include the continued absence of a constitution, the reemergence of Saif al-Islam al as Haftar’s challenger, and lack of naming a final list of candidates due to militia threats to stop the process if the list was announced. Additionally, some guess the last-minute delay was due to mistaken assumptions by various Libyan factions, that their competitors would be disbarred. When this didn’t occur and they risked potential defeat, they decided to freeze the process.

Imad al-Sayeh, head of the election commission stated the commission needs six to eight months to prepare for elections and senior U.N. officials are pushing to hold them by June. In recent days, Presidential candidates have also renewed their support. Meanwhile many Libyans increasingly fear the country may not only remain divided permanently but also be split into three autonomous regions, as during colonial times.

Anxiety about the country’s future is well warranted. Even when held, the elections are unlikely to resolve problems plaguing the country. Power sharing, fair resource allocation, reconciliation, infrastructure investment and economic recovery will be critical. In Tripoli, the victor will also have to execute the wider peace process and remove the twenty thousand foreign forces and entrenched mercenaries while appeasing regional meddlers vying for spheres of influence in the resource rich and geo-strategically located country. He (or she) will have to confront militias from Sudan, Chad and Syria as well as negotiate disputes between rival tribes and factions. Having limited authority over the military will add to the challenge.

In the heavily polarized and fragile political climate, it’s easy to assume election verdicts won’t be respected and armed confrontation by spoilers will ensue. Tripoli has an opportunity to either emerge from chaos and civil strife or relapse into conflict. In 2009, Muammar Al Qaddafi craved for the world to take notice. A decade later, attention has come from international leaders and organizations fighting to rescue the country from drowning in its own internal strife. And just as I did then, I have hope that this remarkable land, filled with national treasures and economic potential, can once again begin a new chapter.