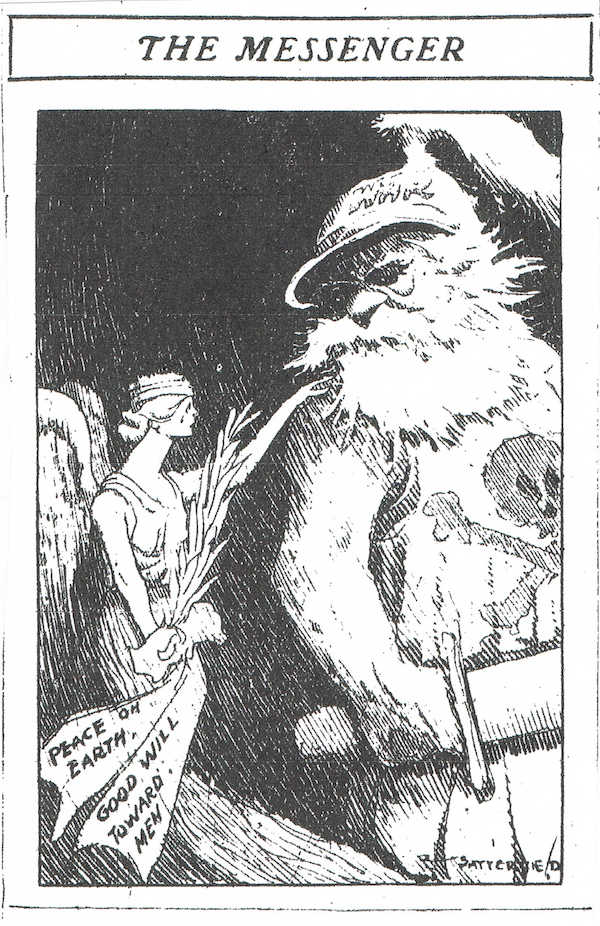 The tragedy in Ukraine is a stark reminder that bad actors still remain on the world stage. How is it that the world’s international organization, the United Nations, despite its overwhelming condemnation of Russian leader Valdimir Putin’s naked aggression against a sovereign state, has failed in its mission to prevent the senseless killing of innocent civilians? The answer is that it cannot do it alone. There is a lesson for all to learn.

In the aftermath of the War of 1812, the first organized peace societies were established in both the United States and Great Britain. In fact, the first peace society in the history of the world was created in New York City by the merchant David Low Dodge, who tucked peace tracts into the boxes of goods he sold to his purchasers. Over the years more sophisticated attempts to promote international law and arbitration were undertaken to find ways to prevent war. But the biggest stumbling block remained a nation’s desire to protect its sovereignty and interests no matter the costs. It is why the ballyhoo and adulatory rhetoric of the participants in the Hague Peace Conferences of 1899 and 1907 fell on deaf ears when, in 1914, Germany and the Austro-Hungarian Empire started, to that point, the worst war humankind had witnessed.

The chilling effects of World War I became a wakeup call not only for traditional pacifist peace societies, which were largely inspired by biblical and religious objections to war, but those including non-pacifists as well. In the aftermath of this horrible tragedy new, more secular, social-minded activist peace organizations appeared, such as the Women’s International League for Peace and Freedom, the War Resisters International, and the religious International Fellowship of Reconciliation. These groups, which continue to play a vital role on behalf of peace and justice, have been joined by others, most notably, Peace Action (formerly SANE). They have incorporated into their ranks sympathetic individuals who are opposed to war in general but not necessarily advocates of complete nonresistance. The roles of these organizations are more critical now than ever, especially in light of the reality of possible nuclear annihilation. These organizations carry out their daily duties on behalf of world peace and justice through a multitude of ways, including promoting awareness through print publications meant to inform and educate on matters related to arms control and global cooperation between citizens from different countries, countering false and misleading propaganda put out by government leaders, participating in public debates,  widespread use of the Internet to mobilize citizen activism, and organizing humanitarian relief efforts. The thread tying together their stated goals has been and continues to be dependence upon private citizen activism.

Yet there remains considerable confusion as to what exactly a peace movement is and how can we appreciate its significance. Grappling with this question became apparent in the aftermath of World War I when the noted historian Merle Curti undertook his own examination, which was popularized in his 1936 work, Peace or War: The American Struggle, 1636-1936. Recognizing the limitations of efforts to prevent past wars, Curti posited three general assumptions worthy of our attention: that the history of pacifist ideals could help change the world; a subjective belief that the story of peace movements can be just as engaging as accounts of military campaigns; and a rational belief in the public value of assessing the true meaning of patriotism and nationalism. Relying on an environmentalist assessment of American ideals, he considered the movement for peace part and parcel of a larger development in social change: “What Americans did to limit or uproot the war system was at every point affected by the traditions and ideals of American life which were dominant in varying degrees at different times.” The connection between peace and social reform highlights, dramatically, the important contribution that peace organizations do play in our daily lives: expanding the parameters of antiwar thought to social justice in the realm of environmental awareness, racial and gender equality, and addressing economic disparity.

Historian Lawrence S. Wittner, best noted for his three volume study of antinuclear activism, maintains that studying peace can really help create a more peaceful world. If we choose to ignore it, what other roadmap will be available when seeking to end the bad habit of war? As Wittner puts it, “Peace History is the historical study of the prerequisites for peace,” not just “peace advocacy and movements.”  In his view, it may be best for historians to examine how peace movements have actually limited the expansion and duration of wars as opposed to whether or not they could have been stopped. Such conflicts in the United States include, for example, the War of 1812, the Mexican War, and the Vietnam War. Those prerequisites for peace come in a variety of forms and are linked to the positive notion of social justice, conducive to building a culture of nonviolence.

It is true, however, that, peace activists often disagree about how to balance efforts like ending violent conflict and reducing armaments with the pursuit of positive forms of peace like racial justice, women’s rights, reducing poverty, and ending colonial rule or repressive government. The historian Charles Chatfield, whose work For Peace and Justice argued for the transformative role of pacifism between the world wars and cast it as more than simply a movement opposing just war, made a similar point when he observed that U.S. antiwar coalitions often become divided because peace groups tend to combine a distinct viewpoint, such as pacifism or emphasis on international law, and ideological world views rooted in Christianity, socialism, feminism, and environmentalism, or practical programs such as lobbying or citizen education. Nigel Young, editor of the massive four volume The Oxford International Encyclopedia of Peace, also describes how it becomes tricky to define the term “peace movements” when peace activists oppose a specific weapons program while defending wars of national liberation or violent resistance to repressive rule. During the Cold War, for instance, Soviet Bloc nations boasted of peace organizations that claimed to represent the views of millions despite being rigidly controlled by Communist parties while the same governments violently suppressed citizen uprisings, and invaded other nations.

Inevitably, what happens when scholars address the issue of war and peace in classrooms and publications, the focus always drifts to an antiwar mentality. Rather than examining the longstanding contributions of peace organizations and the movements themselves, the discussion boils down to its  failures. Admittedly, the long struggle for lasting peace has not been devoid of apparent shortcomings. Internal conflicts and personal rivalries and the inability to gather and use efficiently the limited resources at hand has been one factor. At times, the individualistic ethic of pacifist quietism has raised consternation among antiwar activists seeking a collectivist, radical approach to opposing war. Georgetown historian Michael Kazin noted in War against War that pacifists, during times of peace or brief conflicts, remain on the margins of the political landscape, hardly recognized or acknowledged by their fellow citizens. Peace groups from all parts of the globe have found it difficult to rally different constituencies consumed by varying philosophies and assumptions, which inevitably minimized their practical influence. Another factor, Kazin observes, has been the reluctance of societies to embrace American philosopher William James’s call for a “moral equivalent of war.” Peace activists have been negligent by their own oversimplification of the forces drawing populations into war. For many “plain folk,” war provides a new purpose and direction to escape from poor socio-economic conditions. The glamor of war and idealization of heroism continues to outweigh the horrors of violent conflict, although it is fair to state that weapons of mass destruction has instilled in the minds of many people today a reluctance to accept blindly the call to arms at face value. Still, in times of acute crises, those who did not exhibit a steadfast opposition to all war have sacrificed their consistency, commitment, and sincerity to the forces of popularity, acceptance, and conformity.

What is needed is to distinguish between an antiwar movement—brief, temporary, and reactionary—and a peace movement—longstanding and proactive—even though both are interconnected when it comes to opposing armed conflicts. Peace movements are about ending war and promoting nonviolence but are also more than that. Scholars should point out, as historian Charles DeBenedetti urged in Peace Heroes, that there are many examples were peace activists engaged in efforts to build a better society, which had nothing to do with warfare itself. Instructive is the scholarship already available for readers addressing the role that Alfred Love’s Universal Peace Union played to assist the Native-American plight when faced with Westward Expansion as told by Thomas Curran in Soldiers of Peace; the excellent biographies of A. J. Muste, whom Time labeled America’s No. 1 Pacifist, by Jo Ann O. Robinson and Leilah Danielson, portraying his willingness to engage directly in the labor struggles during the 1919 Lawrence Textile strikes in Massachusetts; Marian Mollin’s Radical Pacifism in Modern America, describing the heroic role members of the Fellowship of Reconciliation undertook when organizing and participating in the 1947 First Journey of Reconciliation on behalf of ending racial segregation in the South (Martin Luther King, Jr., was a member of the Fellowship); and the story of peace activists who engaged in nonviolent direct action on behalf of the environment resulting from the nuclear meltdown at Three Mile Island, which Barbara Epstein’s Political Protest and Cultural Revolution describes.

These examples, and many more, should be part of the historical record necessary for distinguishing between antiwar and pro-peace. This is where we can develop greater appreciation for what peace organizations and their movements have accomplished, historically, in the name of justice. It goes to the very heart of the UN’s Department of Economic and Social Affairs 2015 document, which argues that one of the most important tasks for humanity consists of building “peaceful, just and inclusive societies that provide equal access to justice and . . . are based on respect for human rights (including the right to development), on effective rule of law and good governance at all levels and on transparent, effective and accountable institutions.” When the war in Ukraine finally ends will we take peace organizations and peace movements more seriously?