Time to Amend the Constitution

Donald J. Fraser has spent a lifetime working in a variety of capacities in government. Fraser holds a bachelor’s degree in political science and a master’s degree in public policy and administration and currently teaches history through U.C. Davis’s Osher Center. He is a regular contributor to the History New Network and the author of The Emergence of One American Nation and the The Growth and Collapse of One American Nation. 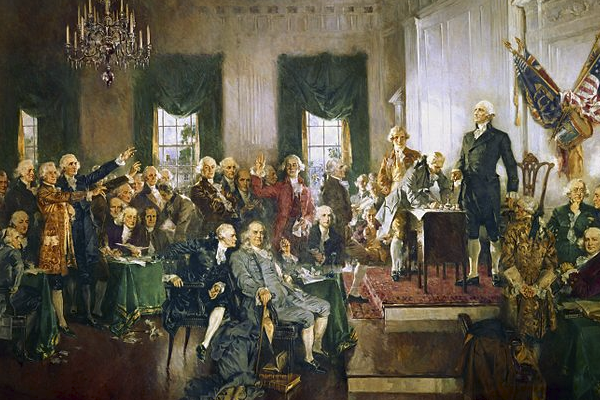 Much has been written about how broken our federal system is. Increasingly it seems that gridlock keeps Congress from passing laws designed to deal with the pressing problems we face as a society. The most recent spate of mass shootings has driven this home, with the Senate finally able to pass only limited gun control measures, despite overwhelming public support for even stronger laws. And this is just one area where the majority of the public favors one set of policies, from access to abortion, fighting climate change, or protecting voting rights, but a majority in Congress cannot reach agreement on what those policies should be. We also have a Supreme Court that is issuing broad opinions that are also out of step with what most people believe.

Even more concerning, our former president Donald Trump, and many of his supporters, do not believe in democracy. Given this situation, we need to consider how to restructure our government to ensure that the majority can rule.

Thomas Jefferson wrote to James Madison about the new American constitution being proposed that “it is my principle that the will of the majority should prevail.” Jefferson’s view was not the prevailing one among the 55 delegates that attended the Constitutional Convention in the summer of 1787. His good friend, James Madison, feared that a majority could run roughshod over the rights of the minority. Many of the other delegates feared too much democracy as well, and the framework they created reflects a whole series of checks and balances designed to slow the popular will. But it was not meant to thwart majority will altogether.

James Madison would soon change his mind about the threat of the majority and instead, in the early years of the Republic, became concerned about minority rule. When he wrote Federalist 10, he assumed that a majority could easily control the minority. “If a faction consists of less than a majority, relief is supplied by the republican principle, which enables the majority to defeat its sinister views by regular vote.” But in the early 1790s, Madison had come to the conclusion that a minority in fact controlled the government in the form of the Federalist Party. He referred to the Federalists as the “anti-republican party” that was “weaker in point” yet still controlled power. His fear of minority government led him and Jefferson to form their own independent political party, the Democratic-Republicans.

It seems that we are now heading for a time, if we are not already there, when a minority of the country also controls power. Part of this is certainly a product of our constitutional design, which no longer seems to reflect the will of majority, in contradiction of the views of Jefferson and the later view of Madison. Over the past twenty years, only one Republican has won the popular vote for the presidency, yet the two parties have split the office during this period. The Senate has always overrepresented small states and rural areas. Even the House, which is based on proportional representation, over-represents the minority. In 2020 the Democrats received more votes than the Republicans in the aggregate but lost seats in the House. The Supreme Court is now dominated by a young conservative majority because Trump, a minority president, was able to appoint three new members to the court.

Each of these trends call for an overhaul of our constitutional structure before minority rule overwhelms us. I can hear you, the reader, thinking: “We can’t even pass normal legislation, how can we ever amend the Constitution?” It’s the same view I have had for a long time. Yet in the past, when faced with a constitutional structure that no longer works, we have amended the document. Our original constitution, the Articles of Confederation, was replaced by our current Constitution. The Constitution has been amended twenty-seven times, often to provide for more democracy and equality. From the Civil War amendments contained in the 13th, 14th and 15th amendments, to the direct election of Senators and providing the vote to women and 18-year-olds, the Constitution has undergone significant changes.

It is in this spirit that I offer up the following amendment proposals, many of which have been raised by others. I have focused on structural changes that will allow for majority rule and avoided any issues that touch on core values (like access to abortion), which are simply too divisive.

The place I start is to make amending the Constitution easier. Sara Isgur, who worked at the Justice Department during the Trump Administration, recently made a concise argument for just such a change.  She recalled a conversation with the late Justice Antonin Scalia in which he said that “it was too hard for the people to overrule Supreme Court decisions.” Ms. Isgur’s proposal is to allow a majority of the Congress to recommend amendments to the states, followed by a vote of two-thirds of the states to ratify those amendments (rather than two-thirds of Congress and three-fourths of the states).

The Senate is our most undemocratic institution, a product of compromise between the large and small states at the Constitutional Convention. As Douglas Amy, professor of politics at Mount Holyoke has pointed out, the 40 million people in 22 small states are represented by forty-four senators, while nearly 40 million people in California are represented by two senators.  My favored approach would be to have each state get one senator, with the other 50 senators allocated based on population. This would still provide protection to small states but allow for a more democratic Senate. This may be difficult to do, given that Article V of the Constitution makes it virtually impossible to change the two senators per state provision. Short of this, the filibuster should be eliminated from the Senate rules so that the majority can pass legislation.

For elections to the House, the elimination of partisan gerrymandering would help to restore that body to what the Framers hoped it would be, the people’s house. This may not require a constitutional amendment but could be done through legislation. But an amendment would make it difficult to ever change. One analyst has suggested that the 15th Amendment could be reworded to read “The right of citizens of the United States to vote shall not be denied or abridged by the United States or by any State on account of political belief, race, color, or previous condition of servitude.” A simple and elegant solution.

Terms in congress should be extended from two years to four years so that House members serve a similar term as the president. The four-year terms would be staggered so that only half of the House members are up for re-election at any one time. This would help to provide greater stability since we would not undergo a massive upheaval every two years in which the House can so easily pass from one party to another. And there would still be a check on a president since half of the House and one-third of the Senate would be up for election every two years.

The Electoral College should be eliminated and the president elected by popular vote as it was created for a variety of reasons that are no longer valid. Some of the Framers feared democracy and the direct election of the president. Southerners wanted to protect slavery, and since the Electoral College reflected the three-fifths compromise on counting slaves for purposes of representation, they believed this would result in more southerners being elected to the presidency. Alexander Hamilton thought that the Electoral College would be an independent body that could provide a check on an unscrupulous person being elected to the presidency. None of these reasons are valid for keeping such an anachronistic institution in place. If the Electoral College cannot be eliminated, then the Constitution should be amended to ensure that the presidential candidate that wins the popular vote in each state gets those electors. Right now, state legislatures have the option to choose the electors, which led to some of the shenanigans that took place in the aftermath of the 2020 election.

Finally, there should be term limits for justices to the Supreme Court. The term limits should be structured in such a way that each president would get to select at least one member of the court. This would ensure that the court stays up to date with current trends in society. It would also lessen the need for so much vitriol over Supreme Court nominations.

These recommendations are designed to ensure that we can actually govern ourselves, solve problems, and allow the will of the majority to prevail, as Jefferson believed. For those who fear this gives too much power to the majority, our current system is worse by giving too much power to the minority. Madison’s prescription for dealing with a minority through voting no longer works and the minority party is not motivated to modify its policy positions to appeal to the majority.