The Contradictory Legacy of Gorbachev and "Revolution From Above"

Ronald Suny is Professor of History and Political Science at the University of Michigan. 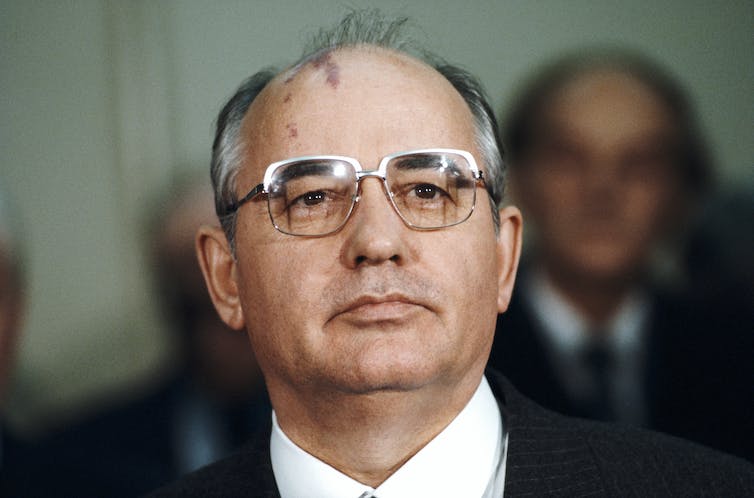 Mikhail Gorbachev was a contradictory figure; his legacy, complex. Hailed in the West as a democrat and liberator of his people – which he genuinely was – he increasingly became despised by many within Russia for destroying the Soviet Union and dismantling a great power.

Either way, he was consequential. Indeed, his death at 91, announced by state media in Russia on Aug. 30, 2022, comes as the ripples of the transformation he helped engineer continue to be felt. The invasion of Ukraine is, in part, an attempt to reverse the loss of status felt in post-Cold War Russia by the disintegration of the Soviet Union that occurred under Gorbachev – something Vladimir Putin views as “the greatest geopolitical catastrophe of the [20th] century.” In a sense, the unraveling of the Soviet Union that began 30 years ago is still going on now, in the bloody war in Ukraine.

Of course, that is not how he is perceived in the West. After enduring Western suspicions when he first came to power that he was simply a wolf in sheep’s clothing, an insincere reformer who was really a hard-line communist, Gorbachev managed to convince the skeptics abroad of his sincerity. U.K. Prime Minister Margaret Thatcher found in Gorbachev someone she could “do business with.” Then, through her, U.S. President Ronald Reagan came around to the view that Gorbachev was indeed an authentic dismantler of the Soviet command system.

Early fears in the West evolved into anxiety about Gorbachev’s survival as he embarked on his great project. He was a reformer aspiring to be a revolutionary from above, wanting to liberalize and democratize his country to save socialism.

But in the process, he ended up undermining socialism as the major alternative to Western neoliberal capitalism. His rushed reforms to modernize the Soviet Union were overtaken by developments on the ground that saw the socialist project fall, to be replaced by a new era in Russia marked by growing nationalism and renewed authoritarianism. 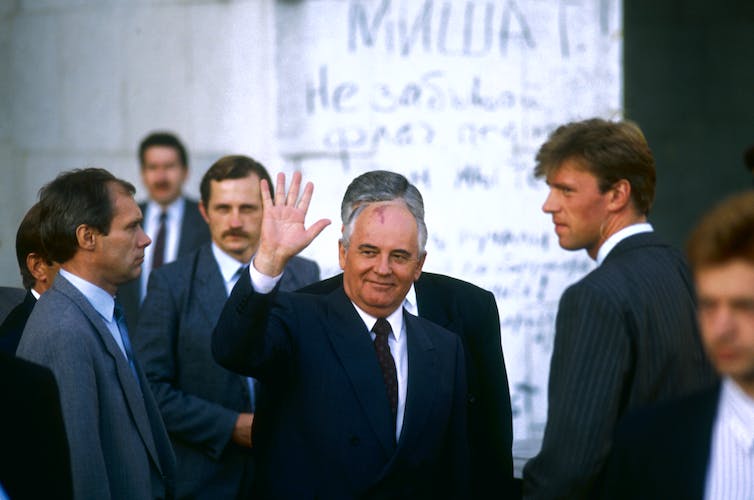 Who was Mikhail Gorbachev and where did he come from?

Born in 1931 in southern Russia as the son of peasants, the young Gorbachev learned about the horrors of Stalinist repressions from his grandfathers, both of whom had suffered imprisonment. Physically strong and exceptionally bright, Gorbachev went on to study law at Moscow State University and soon embarked on a steady rise as a Communist Party official.

A faithful apparatchik, he knew the pathologies of the system: the stultifying, self-serving bureaucracy, repression of free expression, bloated military spending, and lack of initiative and productivity of workers and peasants. Once he achieved the highest position in the party of general secretary in 1985 he embarked on a pell-mell program of reform. It was centered on two ideas, that of “perestroika” – the restructuring the political and economic system – and “glasnost” – the end of censorship and the introduction of freedom of speech and the press.

But from the start, the economic reforms proved to be flawed. Mammoth problems, including the fall in the world price of oil – the USSR’s greatest source of foreign exchange – a devastating earthquake in Armenia and the Chernobyl nuclear disaster impoverished the country and eroded Gorbachev’s popularity at home.

His foreign policy achievements – the withdrawal from war in Afghanistan, liberating the Soviet satellite states in East Central Europe and the reduction of nuclear arms – won him friends abroad.

But many of his closest comrades at home, particularly in the military and KGB, the state security service, were appalled by his surrender of what they considered the gains from the victory over fascism in World War II.

On Gorbachev’s watch, the Soviet Union rapidly declined from a superpower into a pathetically weak state begging for financial help from the George H.W. Bush administration, which never came through. He allowed the two German states, separated during the Cold War by the Berlin Wall into a Western and a Soviet-controlled sector, to reunite without gaining much from the deal.

He mistakenly thought he had a firm agreement with the United States and Germany not to move NATO an inch eastward but failed to get it in writing. Ignoring protests by Gorbachev’s successor, Russia’s President Boris Yeltsin, President Bill Clinton responded to the wishes of East European states to join the Western alliance, taking advantage of the USSR’s weakness. 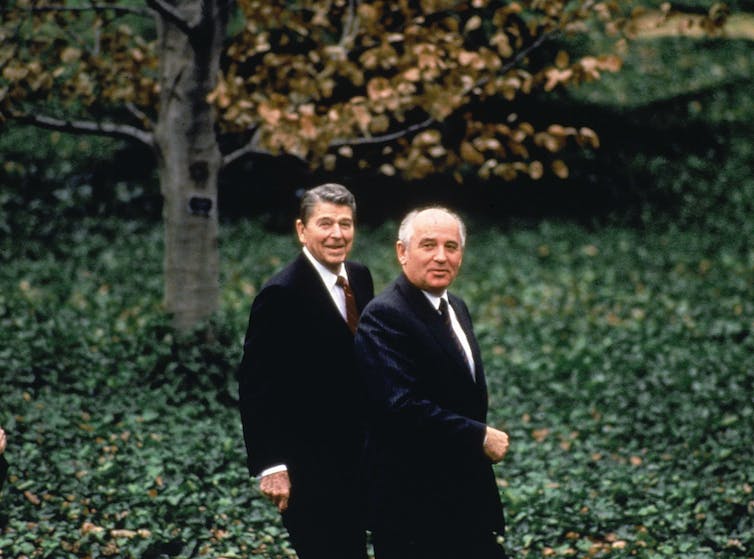 Cold War rivals who found they could ‘do business’ together. Diana Walker/Getty Images

Gorbachev’s political demise and that of the Union

In the 1970s and 1980s the image of the USSR in the West was of a giant nuclear-armed Communist country, a revolutionary, expansionist state, seriously threatening the “free world.” But many who studied it and traveled there, like me, could readily see that it was economically stagnating, socially conservative and politically quite fragile.

By the late 1980s Gorbachev was caught between a conservative elite, which feared change, and self-styled democrats, led by his nemesis, Yeltsin, who clamored for more radical change.

As head of government, Gorbachev was faced with an insoluble dilemma: how to achieve the democratic ends he desired without resorting to undemocratic means, force and violence. Unwilling, except on rare occasions, to use armed force to keep order or save the union, he was ineffective against nationalist resistance in many of the non-Russian republics: Armenia, Azerbaijan, Georgia and Lithuania.

His intentions to turn an empire, in which one nationality dominated over subordinate peoples, into a genuinely democratic federation of equal nations was approved by more than three-quarters of those who voted in a referendum in March 1991.

But a few months later, that plan foundered when some of his generals and secret police agents launched a coup against him. The plotters failed, but the winner of the three-day standoff was not Gorbachev, but Yeltsin.

In early December, three inebriated leaders of Russia, Ukraine, and Belarus met in a forest setting in the absence of Gorbachev, where they came up with a hastily conceived plan to break up the USSR and abolish Gorbachev’s presidency. The Soviet world ended “not with a bang, but a whimper,” to borrow from the poet T.S. Eliot. A weak, ineffective Commonwealth of Independent States was established in which there would be no role for Gorbachev.

On Christmas Day, Gorbachev resigned, a dignified but pathetic figure, now powerless and reduced to running his foundation and writing his memoirs. 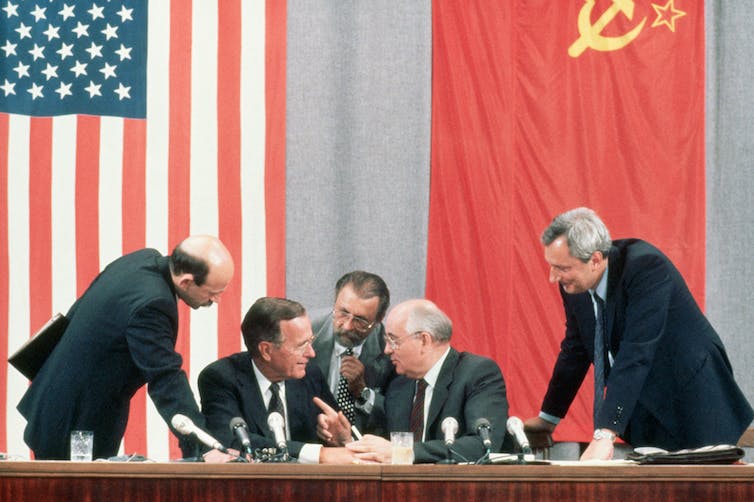 Freedom expanded, but at a cost

Gorbachev’s revolution from above had from its beginning been dependent on reform advocates preventing the conservative elites from undermining his program. Most importantly, he tried to mobilize intellectuals through “glasnost” to pierce the defense of the decaying system. But most writers and academics abandoned gradual approaches for a more rapid transformation.

While unleashing the pent-up resentments and discontents festering in Soviet society, Gorbachev underestimated his ability to control the growing revolution from below.

That freeing of the public sphere brought out striking miners and incensed consumers angry at privileged party potentates and violently gave voice to the suppressed discontents of non-Russians in the various constituent republics of the USSR. Ultimately, the Soviet empire disintegrated, not from a popular, massive uprising from below, as many in the West imagine, but from the mistakes and political infighting at the top, which progressively weakened the center’s authority.

Gorbachev tried to do too much, too fast without the resources to achieve his goals. By 1990 his own weakness and indecision had derailed the revolution from above.

A great emancipator, Gorbachev left a mixed legacy. He expanded freedom for millions but at the same time unleashed roiling waves of nationalism and left the upturned soil for renewed authoritarianism.