El Caudillo: Colonialist Violence and the Rise of Francisco Franco

Giles Tremlet is the Madrid correspondent for The Guardian, with two decades of experience living in and writing about Spain, and the author of The International Brigades: Fascism, Freedom, and the Spanish Civil War. His new España: A Brief History of Spain will be released by Bloomsbury on September 20. 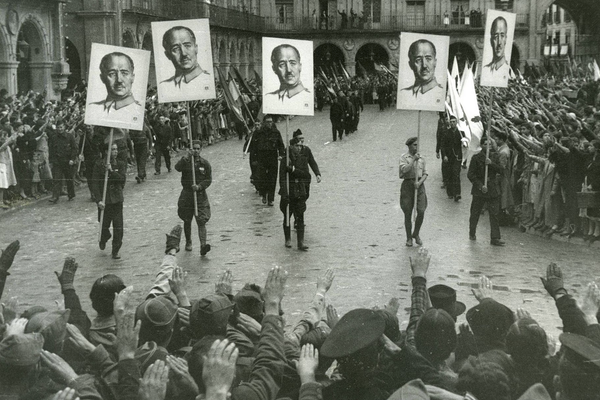 Francisco Franco Bahamonde was a naval officer’s son, who was unable to follow family tradition and go to sea. Instead, he joined the army as a fourteen-year-old military cadet. His high-pitched voice and skinny, short frame saw colleagues give him the nickname of Cerillita, or Little Matchstick (though when he plumped out later in life, they called him Paca la Culona, or Big-Arsed Fanny). Like almost everybody, they underestimated the iron will hidden by his unimpressive aspect. What he lacked in brains and imagination, Franco made up for in ambition and fearlessness. It was enough to make him the most important person in Spain’s bloody and repressive twentieth century.

As a young officer in Morocco, he displayed considerable physical courage time and time again. The consequences were war wounds, a lucky escape from death, rapid promotion and meteoric fame. He arrived in Spain’s narrow sliver of North Africa as a nineteen-year-old second lieutenant in 1912 and left as a thirty three-year-old general in 1926. ‘This is where the idea of rescuing Spain was born,’ Europe’s youngest general admitted later. ‘Without Africa I can barely explain who I am to myself.’

In 1920, when Spain created its own version of the French Legion, the Legión Española, with a battle-cry of ‘Long live death!’, he was an obvious choice to be one of its commanders. The Legion mostly recruited Spaniards and, indeed, came to be seen as the supreme expression of a chest-beating Spanish masculinity based on fearlessness, violence and disdain for weakness or ‘introversion’ of any kind. Its members were known as ‘The Bridegrooms of Death’.

The new Spain was born out of extreme notions of colonial pride, violence and martial vigour. It also reflected the small-minded Roman Catholicism of Franco himself, whose idea of religion was based on obedience rather than love. That did not stop him from stamping on Spanish coins that he was dictator ‘por la gracia de Dios’, ‘by God’s will’. In short, Franco was the perfect reactionary. He wanted a return to social cohesion based on fear and the obedience owed to church, landowners, police and those who sacrificed themselves for the fatherland, meaning the army. He was still relatively young – aged forty-three – as well as notoriously cold and difficult to read. ‘Only his eyes show life and cleverness,’ Alfonso XIII’s son and heir Juan de Borbón (who Franco never allowed to rule), said of him. ‘One is the master of what one does not say, and the slave of what one does,’ Franco himself observed, to explain why he spoke so little. He was a skilled exponent of retranca, a deliberate ambivalence that trips up other people and is reputed to be a mark of people from Galicia.

As a man accustomed to military violence, without empathy and incapable of understanding fear, he felt no compunction about using terror to impose a new, highly personal regime. This was, in some ways, an imitation of the absolutist monarchies of the past, but with a massive increase in violent repression and little of the Enlightenment thought that those regimes encouraged to bring innovation or progress. A sluggish conservatism and a heavy-handed love of ‘order’ stymied early attempts by even those close to him to bring Spain properly into the twentieth century. It did not help that he refused to see himself as a politician, since this was a profession that he despised. Nor was he keen on intellectuals who questioned the supposed virility of his regime.

Miguel de Unamuno had been appalled by anarchist atrocities early in the war and was prepared to give Franco a chance. Within months he discovered his mistake, as friends were detained or shot. In a famous public row with Franco’s former Foreign Legion commander General Millán Astray at Salamanca University late in October 1936, Unamuno denounced the ‘uncivil war’ and warned Franco that military victory alone did not confer moral authority, and that he must convencer, convince, rather than vencer, win. José Millán Astray allegedly shouted: ‘Death to intelligence!’ and Unamuno, once more, was sacked as rector and remained shut up in his house until his death ten weeks later. Another philosopher, José Ortega y Gasset, warned that with Unamuno’s voice now permanently muted, ‘I fear that this country is entering a period of terrible silence.’ He was right.

Excerpted from España: A Brief History of Spain. Used with the permission of the publisher, Bloomsbury. Copyright © 2022 by Giles Tremlett.