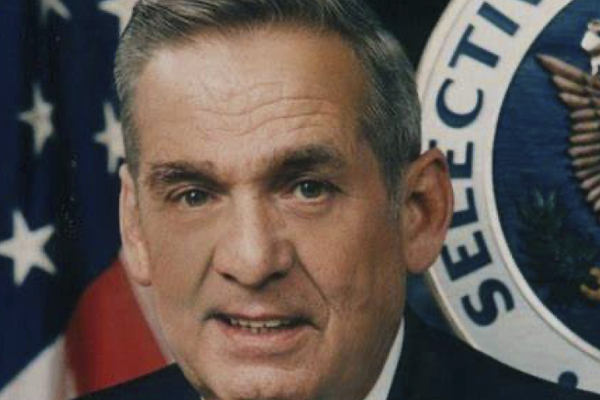 Gil Coronado, photographed during his service as the director of Selective Service during the Clinton administration.

The role of staff, advisors, and bureaucrats in making laws in Washington, D.C. is often buried in the file cabinets of elected members of U.S. Congress and the Senate. These elected officials, uniquely privileged to introduce legislation, often benefit politically from their policy-making activities. Their political standing is linked to their ability tointroduce and pass legislation. When Colonel Gil Coronado was invited to attend a White House ceremony hosted by President Ronald Reagan in 1988 after the passage of Public Law 100-408, he entered a rare political space that few non-elected Latinos had ever occupied. This is an account of how a significant law came about through a persistent champion of Hispanic heritage.

Every year millions of Americans honor National Hispanic Month, September 15th–October 15th. Among other events, they celebrate the arrival of 86 Latino sailors in three small ships that landed more than five hundred years ago in the Americas. These sailors from Spain and Portugal braved unknown waters and maneuvered the ships guided by a Genoan navigator, Christopher Columbus, across the Atlantic and landed at one of the natural ports of the Caribbean Islands. Their landing marked a new era of exploration and colonization in the history of the world. For years Americans have celebrated Columbus Day in honor of the intrepid Italian navigator Columbus. Latinos who sailed with Columbus were also major contributors to the discovery of what has been described as a “New World.”

Latinos have long celebrated historical moments–such as the establishment of America’s earliest mainland community, Saint Augustine in Florida in 1565, more than fifty years before the landing of the Mayflower. Texas school children read about the amazing eight years of travels [1528-1536] of the Spaniard, Alvaro Nunez Cabeza de Vaca, who crisscrossed Texas with Estevan, a Spanish-African Moor. The history of Latinos in America is deep and of great significance.

National Hispanic Month is especially meaningful to showcase the rich diversity of more than 60 million Latinos, the largest ethnic minority in the United States. The celebrations reveal a range of different cultural traditions. There are distinctions among Latinos in their histories, immigration status, Spanish dialects, food, music, and religion. 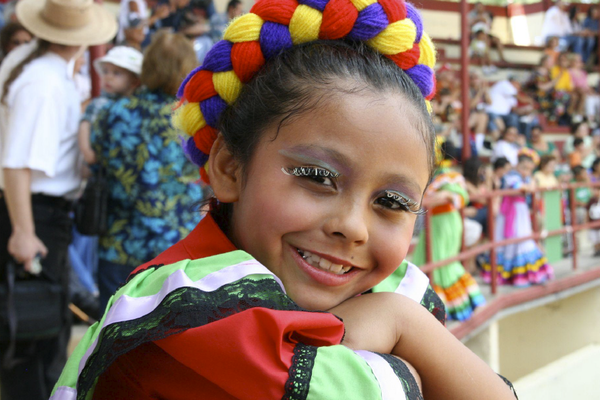 A celebrant of National Hispanic Month in San Antonio. Photo by author.

The inspiration for the National Hispanic Month Celebration can be credited to a San Antonio Westside native, Colonel Gil Coronado [Ret.]. In 1968 President Lyndon B. Johnson first issued an annual proclamation designating the week including September 15 and 16 as National Heritage Week. Coronado thought differently– a week was insufficient to pay special tribute to the rich and enduring plethora of Hispanic traditions. Five American presidents from Johnson to Reagan participated in the early Hispanic Week celebrations before it became an extended month-long event. The story of Coronado’s “Padrino” or “Godfather” role in lobbying for the month-long celebration is noteworthy.

Coronado’s quest to add more weeks to National Hispanic Week began in 1985 when the U.S. Air Force assigned him to the Inter-American Defense Board [IADB] in Washington, D.C. The IADB provides the Organization of American States [OAS] with technical and educational advisory military services on issues related to military and defense matters in the Northern-Southern Hemispheres. In Latin America, the OAS is equivalent to NATO. While working with the OAS, Coronado participated in meetings with the Congressional Hispanic Caucus where he became friends with Los Angeles Congressman Estevan Torres, the Chair of the Caucus, and Elvira Castillo, Executive Director of the Caucus.

President Ronald Reagan credited his victory in 1980 to the increased voter participation of Latinos who joined the Republican Party in the late 1970s. Working with marketing guru Lionel Sosa, another San Antonio native, Republicans joined national vendors of food, beer, and household products to declare the 1980s “The Decade of the Hispanics.” The standard explanation describes this decade as a time when the growing Latino population came to national prominence. 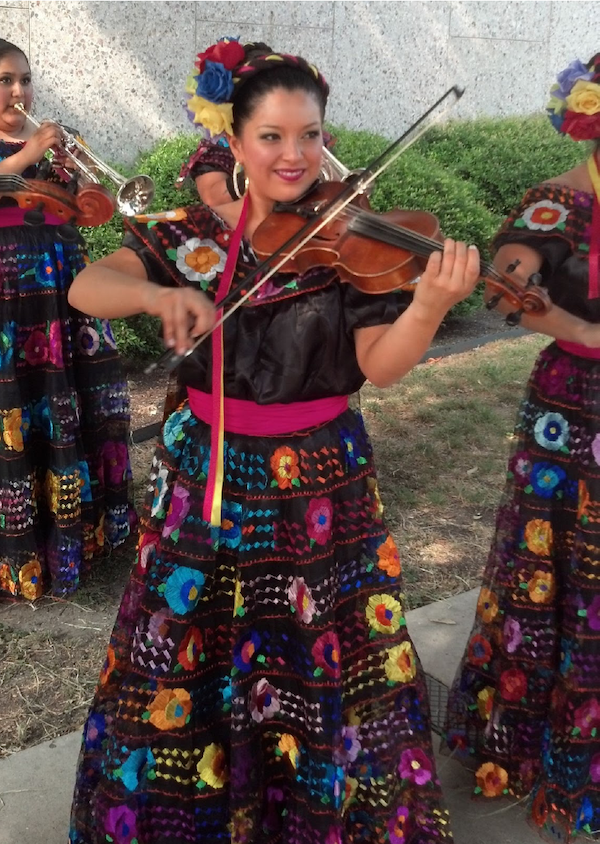 The formation of Latina mariachi groups in the southwest is a recent update to this tradition. Photo by author.

Toward the end of the 1980s, Coronado and members of the Hispanic Caucus debated whether the 80s signified a special Hispanic designation. The improvements over the decade in education, income, and home ownership, for example, were modest at best. Coronado offered that the seven-day celebration of National Hispanic Week was far from sufficient. Many Latinos thought that Hispanics’ annual celebration should model Black History Month, which was officially designated in 1970. Thus, the movement to designate National Hispanic Month began with Coronado and the Congressional Hispanic Caucus.

In 1988, Coronado, assisted by Elvira Castillo of the Hispanic Caucus, prepared the bill to amend National Hispanic Week to National Hispanic Month. California Congressman Estevan Torres asked Coronado to join him on the House floor to witness the co-sponsorship of 218 members of the U.S. Congress, a number sufficient to pass the bill unanimously. With the lead sponsorship of Utah Senator Orlin Hatch, the bill also passed the U.S. Senate with little fanfare. President Reagan signed the new law and invited Coronado to the Rose Garden for a special White House event. At the September 13, 1988 ceremony, Reagan recognized Colonel Coronado “as a stout defender of Hispanic Heritage and the United States of America.”

Coronado retired from the Selective Service in 2001 and returned to his hometown of San Antonio where he currently resides. He is active in the Rotary Club and proud of his alumni status of Lanier High School where he attended until dropping out in the 10th grade to join the Air Force. A traditional vocational high school, Lanier offered him a poor and limited choice between auto mechanics and body and fender repair classes. He wanted something better and decided to leave school during the first semester of the 10th grade.

After altering his birth certificate to make him older and eligible for military service, he showed up at the Air Force recruiting office–he was 15 years old. The recruiters asked him to return in six months when they tested him and gave him a physical. He passed both and they enrolled him in the United States Air Force. He had just turned 16.

After Basic Training at Lackland Air Force Base, Coronado shipped off to a Louisiana base where he excelled in typing classes. The typing classes led to work in signal and code communication. He also earned a spot on the base basketball team. In the mid-1960s, the Air Force deployed him to Southeast Asia where the United States military forces were engaged in the Vietnam War. When he returned to the states, he held a command position at Lackland Air Force Base. During his thirty-seven years of service in the U.S. Air Force, he was awarded a Legion of Merit, a Bronze Star Medal, the Air Force Commendation Medal, a Meritorious Service Medal with three oak leaf clusters, the Joint Service Commendation Medal, and a Distinguished Presidential Unit Citation.

Coronado’s most memorable assignments included Base Commander of the U.S. Air Force Base in Torrejon, Spain as well as serving as the director of Selective Service under President William Clinton. Coronado is proud of his military service and his opportunity to serve his country. He remarked to me that in the military he was “judged and evaluated due to ability, effectiveness, and proven results and not by a Zip Code." Schools were notorious for tracking working-class Latinos into vocational courses versus academic courses. This October Coronado’s San Antonio School District will honor him for his contribution to Hispanic heritage, a well-deserved honor for a high school dropout.