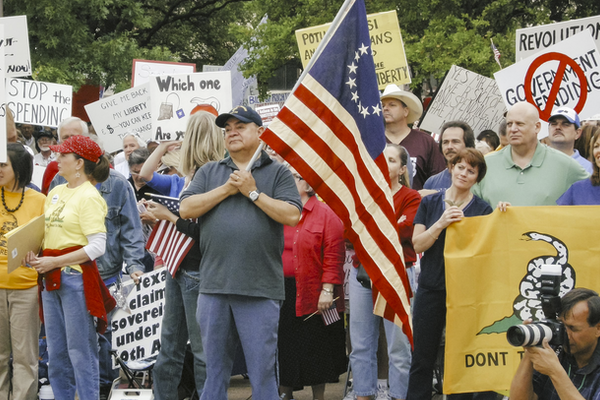 On November 3, 2010, President Barack Obama addressed the media to discuss the previous day’s midterm election and used that term. Our forty-six (yes, Grover Cleveland counts twice) presidents have spoken millions of words publicly in our nation’s history, but I am not sure that word had ever been used before, or since. What happened?

Traditionally, the incumbent president’s party does not fare well in the midterms. “In 22 midterm elections from 1934-2018, the President’s party has averaged a loss of 28 House seats and four Senate seats.” 2010 was the last time a first term Democratic president faced a midterm and Obama used that word as it was both politically and mathematically accurate. Before analysis, let’s remember where America was in the fall of 2010.

When Barack Obama and his family appeared on stage before a massive crowd in Chicago’s Grant Park, he was about to inherit a mess to say the least. Abraham Lincoln and Franklin Roosevelt encountered worse situations, but Obama’s was bad. The country had slid into what would be called the “Great Recession,” and wars in both Afghanistan and Iraq were ongoing and increasingly unpopular. The satirical news site The Onion even published the unforgettable headline “Black Man Given Nation’s Worst Job.” Longtime Obama strategist David Axelrod, after a briefing of the economic team in mid-December 2008 during the transition, told the president-elect “we’re going to get our a—kicked in the midterms.”

Within a month of Obama’s inauguration on February 19, 2009, CNBC’s Rick Santelli’s rant spontaneously created the Tea Party, even though its roots had been around for decades. That movement would be financed by Koch Brothers and other billionaires and was very popular on the right. Sarah Palin became the darling of the movement, with town hall meetings and golden “Don’t Tread On Me” flags flown in people’s yards. Some questioned the true force behind the “grass roots movement,” with House Speaker calling the tea parties “Astro Turf.”

The Affordable Care Act, aka “Obamacare” followed, and even though it was culled from the Heritage Foundation and ‘Ronmeycare’ in Massachusetts it wasn’t popular on the right. The legislation was nearly unanimously hated by Republicans (even those who could benefit from it), as well as far-left Democrats who didn’t think the bill want far enough toward a European style single payer system. Birtherism followed, with a future president continually drawing attention to the president’s birth certificate. The economic recovery was slow and the unemployment rate was a harsh 9.4%.

When the pre-Steve Kornacki and his khakis coverage hit TV screens across the country on November 2nd, the results for Obama and his party were ominous. The Democrats lost everywhere, at every level, and badly. The party lost 63 house seats and control of the chamber. Additionally, six senate seats changed hands, as well as six governorships, 720 state legislative seats, and 26 state legislatures were now Republican. Elections in years that end in zero are “reapportionment” elections, meaning the victors truly owned not only the spoils but the maps. Both sides gerrymander; Democrats draw and decide in Illinois just as the GOP does in neighboring Indiana. It can be done at the street level today with technology, which they did.

How did this happen? “In 2008, when a hundred and thirty million people cast votes in the Presidential election, a hundred and twenty million took the trouble to vote for a representative in Congress. In 2010, seventy-five million did so-forty-five million fewer, a huge drop-off.” As the POTUS described, his party was shellacked. Too many Democrats stayed home, fired up Republicans did not.

What is going to happen on November 8th? Polls have become increasingly inaccurate for a variety of reasons. There simply are Biden and Trump factors, which may inspire a higher turnout than usual in this off-year contest. Then we have the Dodd decision.

On June 24th of this year, the United States Supreme Court voted 6-3 in Dobbs v. Jackson Women's Health Organization overturned fifty years of abortion rights under 1973’s Roe v. Wade decision. Images and videos of angry and disappointed women (and men) became viral nationwide. Does that have an impact on turnout November 8th?

Curiously, the state of Kansas voted six weeks later on a statewide referendum on banning abortion, rejecting it. Secretary of State Scott Schwab predicted 36% turnout, or 700,000 voters. In actuality, the number was 47%, 922,000 ballots, thirty percent more than anticipated. It’s a simple fact that Kansas is one of the most conservative states in the union. The last time they voted democratic for President, Lyndon Johnson was on the ballot in 1964. Yet, in what may be a bellwether for the midterm, fifty nine percent of their electorate chose to cast their vote against the abortion ban.

There are three types of voters in any election: Always vote, never vote, and the important sometimes vote. It is up to campaigns to identify the “sometimes,” and get them to the polls. A major factor in turnout is GOTV, or Get Out The Vote. Obviously, Democrats failed to do this in 2010. Early voting and mail-in ballots are other factors especially after COVID. In Florida, the devastation of Hurricane Ian may come into play in several very close races.

The University of Florida’s U. S. Elections Project noted that, as of October 17th, over 2 million Americans have already voted. This year’s in-person voting isn’t until November 8th, the latest date it can be. University of Florida professor Michael McDonald, who oversees the Elections Project, said that early turnout so far in 2022 was higher than usual for a midterm election. We shall see that evening, and the following day. Please remember, different states have different rules about counting early ballots. In 2020, we knew Florida’s results that night, and in Pennsylvania it took days longer.

No matter what happens, in the United States in 2022, it’s going to be interesting.