Was Henry Hudson a Spy?

Mr. Hunter is the author of God’s Mercies: Rivalry, Betrayal, and the Dream of Discovery, a finalist for the Governor-General’s Literary Award for non-fiction in Canada, and Half Moon: Henry Hudson and the Voyage that Redrew the Map of the World, published in September 2009 by Bloomsbury Press. 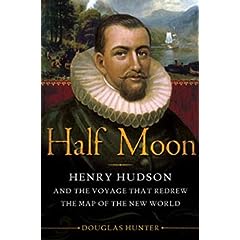 Was Henry Hudson a spy on his 1609 voyage—an intelligence-gatherer working surreptitiously for powerful men in England? It’s a credible explanation for his otherwise strange behavior on the extraordinary voyage that found him anchoring in Upper New York Bay four hundred years ago on September 12. Hudson was about to explore the navigable length of the river that now bears his name and draw a crucial vector of change in the historical course of the New World. But what Hudson, an English mariner in charge of a Dutch vessel, was even doing on the western side of Atlantic has long been a puzzle.

Hudson was, after all, more than three thousand miles off course. He had been hired by the Dutch East India Company, the world’s most powerful commercial entity, to investigate a route over the top of Russia to the Orient’s riches. A severe set of sailing instructions called for him to be back in Amsterdam before winter set in, and specifically forbade him to consider any possible alternate routes at that time. But after being thwarted by fog and ice off the arctic archipelago of Novaya Zemlya, Hudson about-faced in his little Dutch jaght, the Half Moon (variously Halve Maan or Halve Maen in Dutch records) and sailed all the way to the New World, and then did everything in his power never again to show his face in Amsterdam. It was a rogue voyage of discovery on which Hudson had effectively stolen the vessel he was commanding.

Hudson’s Dutch masters had every reason to suspect he’d be trouble. He had disappeared in March 1609, a few weeks before the Half Moon was to sail, taking his wage advance with him. The Zeeland chamber of company investors advised the Amsterdam chamber (whose idea it was to hire Hudson in the first place) to consider him dismissed and either sue him or have him arrested to get the money back. “If he begins to rebel here under our eyes,” the Zeelanders proposed, “ what will he do if he is away from us?” More prescient words have seldom been committed to paper. The company declined to take the Zeeland chamber’s advice. When Hudson rematerialized from parts unknown, he was issued his strict sailing directions, which suggests the Dutch had doubts about his fidelity to the assignment. Just how egregiously he would defy those orders still impresses today.

Hudson pointed the Half Moon at the New World at the first excusable opportunity, and made a meandering reconnoiter of the eastern seaboard that at times seemed answerable only to its own momentum. In the process, he blatantly intruded on territory claimed under English royal patent by the Virginia Company, proprietor of the struggling Jamestown colony.

The threads of this tale are too numerous to spin here. Suffice to say that Hudson’s life was intertwined with some of the most powerful men in the realm of James I, and that a point of convergence for them all was the Virginia Company. We have Hudson’s own word on this, gathered by Thomas Holland, mayor of Dartmouth, who encountered him when he holed up there with the Half Moon in November 1609 at the end of this strange voyage, plotting his next move.

Holland was part of the domestic spy network of Sir Robert Cecil, Secretary of State and Lord High Treasurer. A voluble Hudson not only told Holland about where he had just been and where he was hoping to go next: he allowed that he was “well known (as he told me)” to Sir Walter Cope and Sir Thomas Challener. Cope was none other than Cecil’s longstanding right-hand man and the new Chancellor of the Exchequer; Challener was a prominent court figure who was close to Henry, heir to the throne, who would shortly be invested as Prince of Wales. Cecil, Cope and Challener were all important figures in the Virginia Company.

As it happened, Hudson had vanished from Amsterdam in the spring of 1609 just as the final touches were being put on the “second” Virginia Company (formally chartered in May) that was being organized by Sir Thomas Smythe, a parliamentary favorite of James I who had a hand in just about every major overseas trading company operating out of London. Hudson would have been well known to Smythe from his first two voyages of exploration for English backers. Hudson’s connections to Virginia did not end there. Emanuel Van Meteren, the Dutch consul in London, would assert that Hudson was a friend of Captain John Smith, who sent him letters and maps detailing a possible midcontinental passage to the Pacific Ocean in the Chesapeake.

The Virginia Company was riven by factionalism. There was constant disagreement about priorities: establish a “plantation” settlement, search for the midcontinental passage, or seek minerals and precious metals, to name a few. More than 600 investors subscribed to the 1609 company. It is possible that when Hudson disappeared from Amsterdam in early 1609, he went back to London to see what was up with the new Virginia venture, and secured a private commission to investigate the particular enthusiasms of whoever put him up to it, ex-officio of Virginia Company business—using of course a Dutch ship and money. Clearing up passage-making controversies could have been the assignment, but the journal of Hudson’s adjutant, Robert Juet (author of the most complete record of the voyage), shows abundant curiosity in minerals and metals. Hudson could have been serving the interests of the “refiners” whose obsessions led back to the gold lust of men like Cecil and Smythe. If so, Hudson was completely at odds with his purported friend John Smith, who was exasperated by the behavior of the colony’s leading refiners.

But Hudson may not have been serving anyone other than himself. He certainly understood that New World intelligence would be marketable back in England. The Half Moon voyage unfolds like a bold if reckless attempt by Hudson to seize a possibly unrepeatable opportunity to inspect various points of interest in the New World on his own terms. Once home, he could use the new knowledge to leverage approval for the assignment he’d wanted even before accepting the Dutch assignment: a commission to prove the Northwest Passage to the Orient, over the top of North America. As it turned out, that’s just what he received from a host of prominent backers, including Cecil, Smythe, Challener and Cope. Shame that it killed him.