Mr. Shactman is co-author (with Len Colodny) of The Forty Years War: The Rise and Fall of the Neocons, from Nixon to Obama (HarperCollins, December 2009). 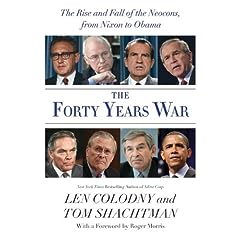 When president-elect Richard M. Nixon chose Harvard professor Henry A. Kissinger as his national security adviser, he had no idea that he was also bringing into his circle, for better or worse, Kissinger’s mentor Fritz A. G. Kraemer, or that Kraemer would urge Kissinger to select as his military assistant Kraemer’s other protégé, Col. Alexander M. Haig, Jr.

Nixon, Kissinger, Kraemer, and Haig would form a quartet whose machinations and interactions would be the steps of an intricate dance that had a major impact on the country’s foreign policy, not only during the Nixon years, but also throughout the presidencies of Nixon successors Ford and Carter, and on into the Reagan presidency, when Haig served as secretary of state.

At the heart of the dance was a fundamental philosophic difference between Kraemer’s ideologically purist, militarist, anti-diplomacy stance, and Nixon’s quintessential pragmatic stance.  Kissinger and Haig were caught between these antipodal poles.  Kraemer had “discovered” Kissinger in 1944 at Camp Claiborne, had superseded his goal of becoming an accountant and readied him intellectually for Harvard.  As Kissinger would later acknowledge, “Kraemer shaped my reading and thinking, influenced my choice of college, awakened my interest in political philosophy and history, inspired both my undergraduate and graduate theses and became an integral and indispensable part of my life.”  In the Pentagon in 1961, Kraemer had similarly discovered Haig, and recommended him for greater responsibilities in the office of Secretary of Defense Robert McNamara.  At the moment of entering the White House in 1969, both Kissinger and Haig subscribed largely to Kraemer’s tenets.

After a few months at Nixon’s elbow, Kissinger made a tremendous adjustment, shifting away from the naïve and knee-jerk militarism he spouted during the administration’s first overseas crisis, the March 1969 North Korean shootdown of an EC-121 reconnaissance plane – Kissinger was not adverse to dropping bombs, even nuclear ones, on the base from which the North Korean MiGs had flown – to facilitating ways to get out of the Vietnam war and to pursue détente with the USSR and rapprochement with mainland China, all of which goals were anathema to Kraemer.

Haig was more fiercely loyal to Kraemer and his ideas.  Haig and Kissinger were almost the same age, and Haig had more Washington experience than Kissinger; in group meetings, Kissinger would be vituperative to the “dumb soldier” Haig, but in private he did not say the same things, since, according to people who saw them together frequently, Kissinger was physically afraid of Haig.

Kissinger met with Kraemer weekly, when schedules permitted, for advice and/or “for absolution,” as Kraemer later told a journalist.   In between such meetings, Kraemer would forward cables to Kissinger whose significance would otherwise be missed, and would occasionally write memos to Kissinger on various subjects.  Kissinger would send some on to the president, usually with Kraemer’s name taken off.   After the first couple, when the next one came in Nixon recognized Kraemer’s writing style and point of view; the president always took the Kraemer memos seriously as arch-conservative but well-reasoned articulations of what was wrong with current policy.

Haig continued to support Kraemer’s ideas in NSC and similar meetings, and on the infrequent occasions when the president asked his opinion.  Haig had picked up very quickly on Nixon’s need to be verbally bellicose, and fed it; he too recognized that his route to power lay in getting closer to Nixon.

But as Haig’s power grew, he retained his fidelity to Kraemer’s militarist stance, assuring Vietnam’s President Thieu and the leaders of Cambodia and Laos, in one-on-one meetings as the president’s emissary, that the U.S. would come to their aid militarily after peace treaties were signed, if they were attacked, a promise that exceeded his authority.

Nixon understood the rivalry between Haig and Kissinger and played on it, occasionally banishing the mercurial Kissinger and insisting that he be briefed daily by Haig until Kissinger was abased enough to return, properly subservient, and resume his post as chief briefer.

During the only known meeting of Kraemer and Nixon, a half-hour in the Oval Office on October 24, 1972, Kissinger refused to allow Haig in the room.  Kraemer pulled no punches, warning Kissinger and Nixon that their proposed settlement of the Vietnam war would undermine South Vietnam and cause America’s allies to question our willingness to stand up for our principles and our friends.

Haig, who had become quite close to Nixon and was scheduled to leave the White House and become vice-chief of staff of the army – a huge promotion – became more openly critical of Kissinger, to the point of near estrangement.  After the signing of the Paris peace treaty, Haig took office as army vice-chief of staff; Nixon had a special private line put in between Haig and himself; even the secretary of defense and the chairman of the joint chiefs did not have such a line to the president.

In early May of 1973, once Haig returned to the White House as Nixon’s chief of staff, he truly influenced things on behalf of the Kraemer ideas in foreign policy, running roughshod over Kissinger’s diplomacy in many ways, aiding Senator Henry “Scoop” Jackson’s attempts to undermine détente, for instance, and preventing the president from hearing the counsel of anyone who did not agree with the Haig-Kraemer right-wing take on foreign affairs.

In 1973-74, Haig and Kissinger were forced to cooperate to some degree, mainly to protect a joint secret they shared, their up-to-the-neck participation in the earlier wiretapping of newsmen and other individuals.  Haig had Nixon write a letter taking full responsibility for that mess so that Kissinger could be confirmed as secretary of state.  By then, Kraemer had become so disillusioned by Kissinger that he almost did not attend Henry’s swearing-in.  Their complete break would come in 1975; even so, as Kissinger said in a eulogy of Kraemer in 2003, “his inspiration remained with me even during the last thirty years when he would not speak to me.”

There’s much more to the story of this quartet, including Haig’s efforts to push Nixon up the plank toward resignation, and how those who detested Nixon’s foreign policies became the neocons in the Ford and Carter years, when they continued and magnified their efforts to undermine those presidents’ Nixonian foreign policies.

Future biographers of Nixon, Kissinger, and Haig will certainly need to take the whole, tangled story of this quartet into account in order to properly evaluate their subjects.

No previous biography of Nixon does so.  As for Kissinger’s biographers, some have dealt with Kraemer but only as an early influence, not as a continuing one, although the evidence for that continuing influence is now available in archived documents, White House tapes, and transcripts of Kissinger’s phone calls.  Haig hardly mentions Kissinger in his autobiography, and Kissinger, in his two massive volumes of memoirs on the Nixon and Ford years, devotes only three pages to Kraemer out of a total of more than 2600.