Slavery and Sectional Strife in the Early American Republic: An Interview with Gary Kornblith

Mr. Binder is an HNN intern. 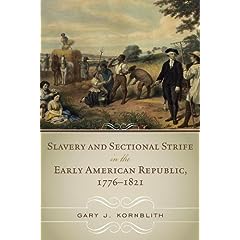 Gary Kornblith is a professor of history at Oberlin College, where he has taught since 1981. His publications include The Industrial Revolution in America and, with Carol Lasser, Teaching American History: Essays Adapted from the Journal of American History, 2001-2007. His most recent work is Slavery and Sectional Strife in the Early American Republic, 1776-1821, the inaugural volume of Rowman & Littlefield’s American Controversies Series. His books can be located for purchase online.

What prompted you to write this book?

In 2005 I was at the book exhibit at the OAH (Organization of American Historians) Convention in San Jose looking for a book to assign undergraduates on the Missouri Compromise. The standard secondary account of the subject was more than 50 years old, and I was hoping to find a collection of primary documents that would be suitable for classroom use. When I asked a sales rep at a publisher’s booth whether his company had any such volume in the works, he replied, “What was the Missouri Compromise?”

Heading home from the conference, I ran into Doug Egerton at the airport and told about this disconcerting exchange. Doug said that he was editing a new series for Rowman & Littlefield on major controversies in American history and that I should write a book for the series about slavery as a political issue in the early republic. I jumped at the opportunity. The projected format for the new series was to combine the kind of historiographical discussion found in Harlan Davidson’s American History Series with the kind of primary documents featured in the Bedford/St. Martin’s Series in History and Culture. My hope was to provide undergraduates – and others as well -- with an accessible sourcebook for exploring why slavery was such a bone of contention in the early republic. Today’s students know that slavery was wrong, but they find its evil so obvious that they have trouble understanding why people ever supported it and why it proved so difficult to abolish in a country supposedly founded on the principle that “all men are created equal.”

What attracted you to this period of history?

As a sophomore at Amherst College, I took John William Ward’s course on Jacksonian America and got hooked on the early nineteenth century. As a graduate student, I – like many others of my generation – looked to E.P. Thompson’s Making of the English Working Class for a model, and I wrote my dissertation on master artisans in New England, 1789-1850. The great thing about the early republic as a period is it is full of dramatic change and upheavals. It starts with the first American Revolution and ends with the second (to use Beardian terminology). In between, the country quadruples in size and sextuples in population; the Industrial Revolution launches; and the struggle for African American emancipation moves from the margins to the center of the national narrative. What could be more exciting than all that?

What was the decision process like in deciding what to include or exclude in terms of the primary documents?

Painful! I wanted to include the well-known voices and documents that one would normally learn about but also the more obscure. The idea was to show a wide spectrum and different dimensions of this complicated debate. There were white southerners who pushed for emancipation, white northerners who didn’t, and so on; students should have a chance to discover that the historical record is not neat and predictable but instead full of surprises that complicate easy assumptions about how people in the past thought and acted.

Obviously, we are focusing on the Early Republic… is there one person whom you would consider the most influential in terms of the slavery debate?

Thomas Jefferson. You can’t get around him. He is the author of the greatest polemic for freedom. Both sides in the argument over American slavery quoted him—the Notes on the State of Virginia as well as the Declaration of Independence. He believed that blacks were human beings with equal human rights--though not equal abilities--and he acknowledged that slavery contradicted his most cherished principles. Yet he remained a slaveholder throughout his adult life. He decried miscegenation and could not imagine a racially integrated republic. Yet he fathered children by Sally Hemings and failed to pursue a “two-state solution” (e.g., a black colony in the Louisiana territory) when he had the opportunity as president. It is easy to attack Jefferson today as a hypocrite or worse, but he epitomized the tragedy of what Edmund Morgan has termed the American paradox of slavery and freedom.

Historians have long argued about whether or not the Civil War was an irrepressible conflict. Much less has been written about the “irrepressibility” of the Missouri Compromise. Could the Missouri Crisis have turned out differently?

Of course! The Missouri Compromise was not inevitable. It seems to me quite conceivable that disunion would have occurred in 1820 had both sides in the debate hung true to their original positions. Would the result of have been civil war at that point in American history? Many contemporaries feared such an outcome, which was a crucial reason that Clay et al. succeeded in forging a compromise. Yet it is also possible that disunion in 1820 would have been peaceful, at least in the short term, and that the so-called free states would have been better off untethered to the South. John Quincy Adams, for one, thought such a path worth serious consideration – at least in the privacy of his diary, though not in his public pronouncements. I include Adams’s reflections in the book.

Throughout your analysis in the first section of the book, you bring in several different scholars each with their differing views about the period. Can you explain your purpose in doing this?

I wish to convey to students and other non-specialists that history is contested terrain even when historians agree about the “facts.” Doing history involves complex judgments that you cannot score on an AP test. I want students to think for themselves and to join in the debate over competing explanations of why things happened the way they did—not just to scribble down what one expert or textbook says is The Truth.

This is your third book designed more for use in the classroom than the traditional monograph. What draws you to this format?

I certainly value monographs and am engaged in writing one right now. But more than a researcher, I am a teacher, and I am proud of my vocation. I like to raise provocative questions in classroom settings and to push students to think “outside the box.” If I can’t interest a twenty-year-old in a historical problem, then I haven’t done my job.

What is your current project?

Carol Lasser and I are working on the history of race in Oberlin, Ohio. Antebellum Oberlin was a hotbed of abolitionism and openly welcomed African Americans at a time when that racism ran rampant in the North as well as the South. By 1860, blacks comprised one-fifth of Oberlin’s population. They comprise the same proportion of the town’s population today. Yet over the course of more than 150 years, Oberlin has not achieved racial equality. The average income of black households remains considerably lower than that of white households, while the poverty rate among blacks is much higher. Our goal is to understand why a town that got off to such a progressive start has been unable thus far to resolve the American dilemma.