Mr. Shenkman is the editor of HNN. 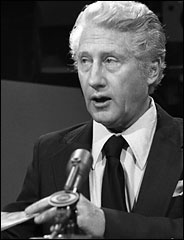 On Tuesday May 31, 2005 the wires reported that former FBI official W. Mark Felt has admitted that he was Deep Throat, the famous Watergate source for Washington Post reporters Bob Woodward and Carl Bernstein. A story about his admission was published by Vanity Fair. Felt, who is 91 and in failing health, was second in command at the FBI during Watergate. Until now he has always denied being Deep Throat, the source who helped Woodward and Bernstein confirm leads and hunches in their search for the truth about the "White House horrors," as Attorney General John Mitchell referred to the various crimes and offenses that go by the name of Watergate. Bernstein at first refused to confirm Felt's identity, saying: "When the individual known as Deep Throat dies, we will reveal his identity, and explain at great length all of our dealings with that individual and context of that relationship." But he also declined to deny that Felt was telling the truth. And late in the afternoon of May 31st the Post confirmed that Felt was Deep Throat.

Assuming Mr. Felt is telling the truth--and that the Post is too (see Joan Hoff, Here We Go Again: Deep Throat Revealed?)--one of the great mysteries of the 20th century has finally been solved. Who among the experts was right in unraveling the identity of the elusive source? And who was wrong? Some answers.

Donald Ritchie, Associate historian of the United States Senate, accurately drew attention to Mr. Felt in Reporting from Washington: The History of the Washington Press Corps (Oxford University Press), which was published in March of this year:

Identifying Bob Woodward's source as having a connection with the Federal Bureau of Investigation suggests a motive for the leaker. The cover-up that eventually caused Nixon to resign the presidency had been aimed at keeping the FBI from conducting a full investigation of the Watergate burglary or from following the political money trail back to the White House. For months, Woodward's source helped generate news accounts that kept the investigation on track. The source seemed to know everything that the FBI had uncovered, but revealed nothing that cast the bureau in a poor light. Deep Throat, for instance, did not mention the former FBI agent Alfred Baldwin, who had monitored the wiretaps for the Watergate burglars. Baldwin had handled previous 'black bag' jobs that the bureau did not want disclosed. It was the Los Angeles Times not the Washington Post that eventually broke Baldwin's story. "Sometimes people accuse us of bringing down the president, which of course we didn't do and shouldn't have done," publisher Katharine Graham commented. "What the Post did . . . was to keep the story alive. (pp. 228-29) ...

"I've always felt the leak is at the FBI," Nixon ruminated at Camp David on October 15. An attorney for the Washington Post had privately identified Mark Felt as the leaker, but the president could not take action because Felt knew "everything that's to be known in the FBI," and might go on network television to tell it. Instead, the White House sent word to Pat Gray not to place any further confidence in his deputy. Confronted with these suspicions, Felt protested, "Pat, I haven't leaked anything to anybody. They are wrong!" From that point on, Deep Throat refused to allow Woodward to use him as a source on any "Haldeman story." (p. 233)

Mr. Ritchie noted in an email to HNN that "There's an additional irony to the story that I didn't mention in the book. When Mark Felt and other FBI officials were later prosecuted for extralegal activities like those "black bag jobs," Richard Nixon gave him a character reference!"

Tim Noah, a journalist at Slate.com and author of the Chatterbox column, surmised in 1999 that Mark Felt was Deep Throat. He insisted that Felt's denial was irrelevant:

Reporter David Daley of the Hartford Courant has found W. Mark Felt, the former FBI associate director believed by the late Richard Nixon and various other people to have been Deep Throat. (See"Another Bulletin From the Deep Throat Desk,""Deep Throat Revealed [Again]," and"Deep Throat Revealed [One Last Time].") Knowing that Felt had denied being Deep Throat before, Chatterbox wondered aloud earlier this week whether Felt would still deny it. Daley did better than wonder: In a story published in Wednesday's Courant, Daley tracked the 85-year-old Felt down in California and asked him if he was Deep Throat."No, it's not me," Felt answered. "I would have done better. I would have been more effective. Deep Throat didn't exactly bring the White House crashing down, did he?"

Chatterbox doesn't know what to make of Felt's claim that Deep Throat was"ineffective," but will set that aside for now. Daley's story, which was picked up by the Associated Press and MSNBC, broke the news that a 19-year-old from Port Chester, N.Y., named Chase Culeman-Beckman claims to have been told by Carl Bernstein's son Jacob that Deep Throat was ... Mark Felt. Culeman-Beckman says that 11 years ago he attended Hampton Day School Camp in Bridgehampton, Long Island with Carl Bernstein's sons, Jacob and Max, and that Jacob was the one who told him. According to Daley, Culeman-Beckman"said the young Bernstein told him the information came straight from his dad," who of course is one of the three people known to be party to the secret. (The other two are Bob Woodward and Ben Bradlee.)

Chatterbox, who is increasingly drawn to the hypothesis that Deep Throat was indeed Felt, finds much to like in this story....

Over at Salon.com's War Room blog Tim Grieve has given credit to:

Jack Limpert, who thought he'd discovered that Felt was"Deep Throat" way back in 1974; James Mann, who wrote an article in the Atlantic Monthly in 1992 suggesting that Felt was it; Ronald Kessler, who covered some of the same territory Vanity Fair covers today in his own book in 2002; and the editors of The Washingtonian, who have been saying for a few years now that they"still think it was Mark Felt."

In February former Nixon White House counsel John Dean reported in the Los Angeles Times that he had heard--from a source!--that Deep Throat was ill. That prompted speculation over at the blog run by Kevin Drum, Political Animal, that Mark Felt was Deep Throat, noting that the 91-year old former FBI official's health was in danger.

Among those who guessed wrong was:

Then there was historian Stanley Kutler, a Watergate scholar, who opined at HNN that he didn't care who Deep Throat was: "The real story of Watergate is infinitely richer and more complex than the press-centric version."

Finally, there are the hold-outs like Jon Wiener, a professor of history at UC Irvine and a columnist for the Nation, who believe there was no Deep Throat:

Mark Felt now claims that he was Woodward and Bernstein’s "Deep Throat," but that doesn't mean he's right. It’s more likely he was one of several people who provided key information and who were turned into a composite figure for dramatic purposes by the authors. Strong evidence that Deep Throat was a composite can be found in the memoir written by Woodward and Bernstein's former literary agent, David Obst. His book, Too Good to Be Forgotten, reports that the first draft of All the President’s Men didn't mention Deep Throat. The character was created as part of revising the original manuscript.

Where did the conception for the composite character come from? Stephen Ambrose reportedly said that the idea came from Woodward and Bernstein’s editor, the famous Alice Mayhew. After reading the first draft, she suggested Woodward and Bernstein give the book a stronger plot by creating a single composite mystery character out of several sources. The source here, as Jonah Goldberg reminded readers in the National Review online earlier this spring, is Fox News media analyst Eric Burns, who said Ambrose, who died in 2002, had Mayhew as his editor as well, and got the story directly from her.

As of 8:30 PM EST neither Woodward or Bernstein have confirmed that Felt is the mole... Until either can confirm this to be true then it is again pure speculation...

Thanks for the update. What a sad end to a tragic story and time. 58, 359 brave American's lost in Vietnam, a nation turned upside down, a presidency... albeit, a criminal one... brought down in disgrace and Mr. Nixon escaped, by pardon, the justice he so well deserved.

How ironic that a "Hoover Man" would be the one to finger the administration.

So I heard. Guess that's that.

Patrick,
I am inclined to agree. Although this does look legitimate and I have no reason to doubt the story, until Woodward or Bernstein acknowledge this, I will reserve final judgement.