Williamjames Hull Hoffer is an associate professor of history at Seton Hall University and the author of the recently published book from Johns Hopkins University Press, “The Caning of Charles Sumner: Honor, Idealism, and the Origins of the Civil War,” among other works. 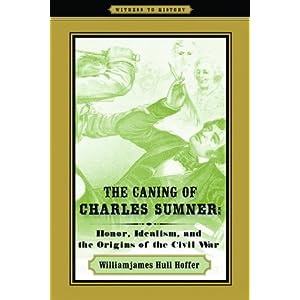 On May 22, 1856, Congressman Preston S. Brooks of South Carolina used his gutta percha cane to beat Senator Charles Sumner of Massachusetts into bloody unconsciousness on the floor of the United State Senate chamber.  On September 9, 2009, Congressman Joe Wilson shouted “You lie!” during President Obama’s joint address to Congress on health care reform.  Both actions resulted in condemning votes by the House.  In Brooks’ case, it was a vote to expel, which fell short of the requisite two-thirds.  In April of 2010, Virginia Governor Robert McDonnell issued an official proclamation declaring a celebration of “Confederate History Month.”  To many both in 1856 and more recently, these incidents marked a nation divided, a crisis in civility, and remarkably different notions of what defined that nation.  As the author of a recent book on the caning, it seems to me a little reflection is in order.

Brooks was reacting to a speech Charles Sumner had given on May 19 and 20, “The Crime Against Kansas” oration in which the Republican abolitionist lamented what pro-slavery forces had been doing in the Kansas territory.  Known to us as “Bloody Kansas,” it was a preliminary confrontation to the Civil War, the nation’s most gut-wrenching, devastating conflict.  But Sumner did not limit his remarks to the legal case against the Border Ruffians, the Pierce administration, and the evils of slavery.  He singled out South Carolina’s Andrew Butler, among others, for particular abuse.  Most likely, this was revenge for a prior exchange between himself and the former judge, who was also Brooks’ cousin.  With Brooks and a full gallery present, Sumner made light of Butler’s speech problem, his state, and, in a memorable analogy, his defense of the “harlot slavery” who “though ugly to others, is always lovely to him; though polluted in the sight of the world, is chaste in his sight.”

Brooks, a noted duelist from the fighting Edgefield district (partly congruent with current day Representative Wilson’s own 2nd District), knew what he had to do to defend his honor, the honor of his state, and the honor of his relative.  He selected his cane, sought Sumner out, waited for the ladies to leave the chamber, and issued his challenge before he unleashed his furious barrage.  Though stemming from a similar disgust, a partisan political rivalry, and a basic conflict in values, Wilson’s outburst seems from an altogether different world.

Obama has Sumner’s basic desire to effect change with grand speeches, but not the Bay State Senator’s uncompromising tendentiousness.  Sumner wanted to provoke a response.  It was not necessarily one from the pro-slave South, but certainly from his constituents back home and a wider audience throughout the free state North.  Wilson would not think of caning Obama, even if he were still a senator from Illinois.  There is just not that kind of cultural divide.  Brooks believed that Sumner was something less than a man.  And Brooks’ state, and much of the South agreed.  After he resigned his seat, he was returned without a dissenting vote.  They gave him canes engraved with the words, “Hit him again,” and “Knock-down Arguments.”

Likewise, although Governor McDonnell and Confederate History Month celebrants differ in their views of the nature of that struggle from historians like me, McDonnell also is a product of that conflict’s eventual aftermath.  When African-Americans joined the historical community in criticizing the proclamation and the governor’s further elaboration denying slavery as the major cause of the war, Governor McDonnell apologized.  This would have been unthinkable even a few decades ago.

We might be wary of the lack of decorum in our public gatherings, the armed protesters at town hall meetings, and the rants from talking heads.  But we must also keep it all in perspective.  We are not the rough-hewn, violently combative, and vituperative nation we were on the brink of the Civil War.  We may be thankful for that at least.  Hopefully, we have learned something since then.

In discussing the lack of civility and Andrew Jackson in the 19th-century, one should bring up his wife Rachel. John Quincy Adams supporters proclaimed her an adulterer, bigamist, and whore. Many historians claim that all the accusations (which were relentless during the 1828 campaign) led to her deep depression and severe mental and physical deterioration. It resulted in her sudden death before Jackson made it to the White House. Imagine something like that happening today.

Any country that would elect someone as thugish as Andrew Jackson to be president has got to be a very uncivil place. Truman was probably the personally nastiest 20th century president, but he was a nice guy compared to #7.