Michael K. Honey is the Fred and Dorothy Haley Professor of Humanities at the University of Washington, Tacoma. His new edited book of King’s speeches to unions, “All Labor Has Dignity” (Beacon Press, 2011), is now available in bookstores, as is his previous study, “Going Down Jericho Road: The Memphis Strike, Martin Luther King’s Last Campaign” (W.W. Norton, 2007). 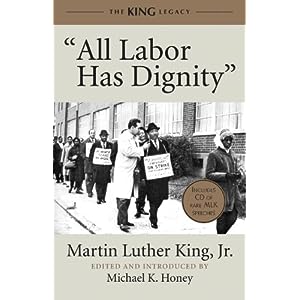 At this time of year we remember King’s positive messages of hope:  the best thing to make of an enemy is a friend; love is at the center of the universe; follow the nonviolence of Jesus and Gandhi.  The current moment also reminds me very much of King’s courage.  Like many public leaders today, from the president on down, King received regular death threats during most of his adult life, but continued on his mission.

When white supremacists bombed his home during the Montgomery bus boycott in 1956, they nearly killed his wife and one-year old daughter. In 1957, the John Birch Society sent postcards and segregationists put up billboard with a photo of King at Tennessee’s Highlander Center with this erroneous headline:  “Martin Luther King at a Communist Training School.”  FBI director J. Edgar Hoover denounced King as “the most notorious liar in America” and secretly orchestrated a mass media campaign against him.

The Christian Crusade led by the Rev. Billy James Hargis distributed tens of thousands of pamphlets and spoke on a vast number of AM radio stations targeting King.  Through these and other efforts, many whites came to believe that the most famous Baptist preacher in the world, next to Billy Graham, was a “communist deceiver.”  He became the number one target of the radical right.

Like anyone would be, King was afraid, but continued on.

On September 28, 1962, as King spoke at a church in Birmingham, Ala., White Power advocate Roy James jumped onto the stage and smashed King in the face.  King staggered as James then slugged him on the side of the head, following with two kidney punches.  As James then hit King again, King dropped his hands and put up no resistance.

As his aides led James away, King calmly returned to his talk.  Four months later, James again slugged King while he was speaking in Chicago.  The Rockwell Report, the organ of Rockwell’s National Socialist White People’s Party—the American Nazis—published “How I Bashed Nigger King” in which James boasted of “administering justice to a vile communist race-mixing nigger agitator.”

King believed the climate of hate and against civil rights contributed to the climate in which someone believed they would be rewarded for murdering President John F. Kennedy.  He told his wife Coretta that climate would lead to his death, too.  In 1966, during open-housing marches in Chicago crowds of hate-filled young white men carrying Nazi and “white power” slogans, taunted King with death threats and hit him in the head with a rock.  He felt even more threatened when he came out against the Vietnam War in 1967.

But many dismissed people who used guns to kill public figures as fringe elements extraneous to our politics.  After one of Rockwell’s disgruntled followers assassinated him in 1967, the president of the American Jewish Congress claimed Rockwell had “made no impact on American life.”  King could never dismiss the extreme right or seeming lunatics so easily.

As early as 1961, an alarmed King warned the AFL-CIO that a growing right-wing coalition would soon “threaten everything fair and decent in American life.”  With automation and outsourcing leading to rising unemployment, underemployment, and loss of unions, the economic climate would be “made to order for those who would seek to drive labor into impotency” and erase civil rights gains.  He subsequently watched political candidates on the right, from Goldwater to Nixon to Reagan, draw on the escalating racial and economic fears of millions of white voters to pull them into the Republican Party in opposition to movements for social change.

If politicians and media commentators took advantage of the stereotypes and falsehoods peddled by the more extreme right, a climate of hateful propaganda also created a competition among legions of young white men to be the first to bring King down.  King warned his family of impending death before he went to Memphis, where James Earl Ray, a follower of the race-baiting politician George Wallace, shot him to death on April 4, 1968.

The inflammatory propaganda of hate and fear in our own time scarcely needs discussion here.  People who kill public leaders may indeed be paranoid and psychotic, but history shows them to be much more deadly when politicians and propagandists fan and justify their delusions.  It is up to all of us to stand up with courage, as King did, to end the climate of hate.

The John Birch Society didn't distribute the Highlander photo in 1957. It wasn't founded until December 1958.

Thank you for your article on Dr King and the climate of hate he faced.

Sadly, even the government fueled the volatile atmosphere then with the FBI's campaign to undermine Dr King at every turn. J Edgar Hoover, the FBI Director, publicly portrayed Dr King as a threat to the country, and the FBI's campaign against Dr King included writing editorials critical of him that were often published verbatim by newspapers in cities that King visited, such as those run in the Memphis Commercial-Appeal in the days before Dr King was killed in Memphis.

I look forward to your new book Dr Honey.