The Declaration of Independence and the American Dream

Jim Cullen is a book review editor at HNN. He is also the author of the Kindle Single President Hanks. This essay is adapted from the newly published “Twilights Gleaming: The American Dream and the Ends of Republics,” included in The American Dream in the Twenty-First Century,edited by Sandra Hanson and John White (Temple University Press). 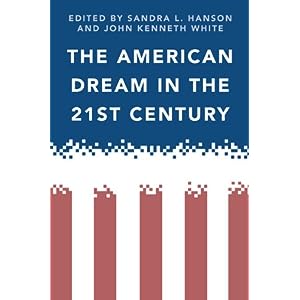 What is the point of this story?
What information pertains?
The thought that life could be better
Is woven indelibly into our hearts
And our brains
--Paul Simon, “Train in the Distance” (1983)

“America is a young country,” people sometimes say.  What they really seem to mean is: “the United States is a young nation.”  Such a statement makes some sense if one thinks of a political entity that came into existence circa July 4, 1776.  It makes less sense when one considers that the Constitution that followed about a dozen years later is the oldest written functioning one in the world.  Compared with a traditional nation-state like France or Spain, sure—the United States is a young nation, even if France has had a few republics since then.

But that swath of territory between Canada, Mexico, and a pair of oceans is not a particularly young country, if one thinks of a country as an entity with a (loosely) shared history, language, and culture.  For such a place, the founding of Jamestown, Virginia in 1607 matters more than what happened in that late-blooming city of Philadelphia in 1776.  Many of the hallmarks of what we have come to know as “American life” took root then, among them a penchant for relatively strong local governments, religious pluralism, and a comparatively high standard of living, even for slaves.  Among the most important was the emergence of a deep and durable belief in the efficacy of individual aspiration that Alexander de Tocqueville, in his closely observed two-volume study, Democracy in America (1835/40) dubbed “the charm of anticipated success.”  In modern times, we have come to know it as the American Dream. This dream, codified as “the pursuit of happiness,” was affirmed, not created, in 1776. It was already old by then.

Ever since, the Declaration of Independence has functioned as the banner of the American Dream, one repeatedly waved by figures that included women’s rights activists, populists, homosexuals, and anyone who has ever believed that happiness can not only be pursued, but attained.  The U.S. Constitution, which marked the other bookend of the nation’s creation, lacks the mythic resonances of the Declaration, though it takes little reflection to see that it is the backdrop, if not the foundation, for all American Dreams.  Whatever their disagreements about its scope or character, most Americans would agree that their national government is legitimate insofar as it permits a level playing field of dreams.  Many of us have doubts that the government does serve this function; few have doubts that it should.

But again:  the American Dream was alive and well, even if nobody called it as such, long before there was a Declaration, a Constitution, or even a United States of America.  The life of Benjamin Franklin, who rose from obscurity to fame and fortune a generation before the American Revolution, makes that clear.  Indeed, as historians of the Revolution have long asserted, much of the energy for independence, at least initially, was understood as a struggle by the colonists who feared losing an old way of life in a reorganized British empire, not creating a new one.  In an important sense American society in many colonies preceded anything resembling a powerful, centralized government, and even after independence.

So the American Dream is more the product of a cultural environment than a political ideology or a set of political arrangements.  The Dream thrived in a monarchy before it did in a republic.  And, some might way say, the Dream seems to be thriving in a civilization that has long since become an empire.  In fact, some might go further and say that the American Dream itself is an imperial construct, a sense of possibility for some that necessarily depends on taking it away from others—in this case Native Americans, African Americans, and Mexicans, among others.

There is, of course, considerable cogency to this view.  But it may also explain a little too much:  As far as I can tell, every society has derived its legitimacy through some means of apportioning and distributing opportunity to its members, however broadly or narrowly defined, whether the society in question is that of the ancient Mayans or the ostensibly egalitarian Soviet Union.  And that has usually meant confiscating the resources of others.  If we must shed our illusions about the Dream being a uniquely good thing, I think we should also recognize it has not been uniquely bad.  It is, simply, one of those things—maybe the most important thing—that defines us as a country.  It is the unum in our pluribus.