American Corporate Power: Like So Many Other Things, It’s in the Founding

School loans.  Health insurance.  Homeland security. Online music. Energy. Transportation. Bankruptcy. For better and for worse, these and many other subjects of public policy are greatly affected by the actions and interests of large corporations.  Corporations play such an important role in economic and political affairs not by happenstance or by slow evolution, but because that’s exactly what the founders of America’s first corporations intended.  And corporate leaders will continue to be such big players because, from the American Revolution on, corporations have been woven into the fabric of American democracy and policymaking. 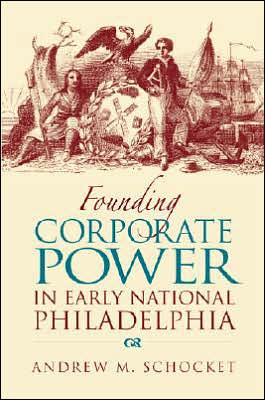 Historians have traditionally put the origins of American corporate power sometime in the late nineteenth century.  For causes, scholars have noted industrialization, the advent of a nationally integrated economy, executives’ desire to manage the complexities of administrative challenges like running railroads, and the expansion of stock markets. True, late 19th-century United States corporate giants dwarfed the nation’s first corporations (though compared to today’s largest corporations, they were all pygmies). But contrary to the standard tale historians tell, from the very beginning of this nation, American corporations were meant to profit and to set economic policy outside the political process.

There’s no better indication of corporate founders’ intent than the establishment of the first business corporation in the United States, the Bank of North America. Chartered by Pennsylvania in 1781 and based in Philadelphia, the Bank fulfilled a variety of economic needs.  It lent the Continental Congress badly needed funds to run the American Revolutionary War.  It lent money to individuals in a time when credit was hard to come by.  It provided a stable currency by issuing loans through the printing of its own banknotes.  And while at first a risky venture, the Bank soon made handsome profits for its investors.  But for Robert Morris, James Wilson, William Bingham, Thomas Willing, and the other wealthy Philadelphia men who designed and ran it, the Bank – like any institution – also served social and political purposes.

Before the American Revolution, two competing factions of wealthy, well-connected men dominated Pennsylvania politics, but at the beginning of the American Revolution, both groups held back.  Philadelphia artisans and western farmers took the lead in Pennsylvania’s revolutionary activities and in establishing an independent Pennsylvania.  The radical new state allowed most white men to vote and passed the world’s first law to gradually abolish slavery.  Maybe most frightening to men like Morris and Wilson, this egalitarian government passed laws regulating prices, restricting some kinds of commerce, and making debts harder to collect, all to ensure that everyone could afford necessities during wartime.

So, while the Bank performed vital financial functions, from its boosters’ point of view the Bank also took the issues of money supply and credit out of the hands of legislators and into their own.  Corporate bankers could do nothing about price regulations, but they did decide how many banknotes would be printed and who would get loans -- mostly wealthy merchants tied to bank insiders by business, politics, or family.  The Bank also lessened the Continental Congress’s financial dependence on the fickle state governments that elite bankers disdained.  In 1787, during the Constitutional Convention, Wilson, Morris, and Alexander Hamilton (another big bank supporter) insisted upon a clause in the Constitution forbidding states from issuing money.  Given that no one then imagined that the federal government would ever print its own money, they guaranteed that corporate banks rather than elected governments would be in control of the nation’s money supply.

Many of the same men who founded the Bank of North America followed a similar path in developing transportation in Pennsylvania.  Rather than state government (and thus taxpayers) footing the bill, corporate investors put up the money for the turnpikes and canals necessary to bring produce and coal from the countryside to the city and manufactured goods from the coast inland.  In contrast to bank stockholders, these investors often lost money, but they did gain control over the crucial decisions concerning road and canal routes.

Unlike today, when anyone can incorporate a business by filling out forms and paying a fee, during the nation’s first decades corporations were created by laws passed like any other laws.  Tellingly, the legislators most opposed to corporations, especially to banks, always demanded that the state receive a large block of stock in return for incorporation.  That was the easiest way to exact a price out of corporate investors.  For their part, corporate men (and, as early as the 1810s, their lobbyists) constantly resisted any kind of taxation or government oversight, but officers of the various Philadelphia banks often conferred with each other on policy decisions concerning how much money they would lend, how, and to whom.

In essence, the establishment of corporations represented a deal between Pennsylvania’s elected government and Philadelphia’s moneyed men.  Keeping everyone’s property taxes low, private investors would put up the money to establish banks and transportation (although sometimes the state gave struggling canal and turnpike companies a boost).  Corporations paid taxes by giving the state government either corporate stock or a percentage of profits. And while the state put some limits on corporate behavior, corporate men called the shots on policies that otherwise would be decided by elected officials.  Though Philadelphia and Pennsylvania were to some extent unique, the same unwritten agreement between legislators and corporate men occurred during the first half-century after independence in other northern states like New York and Massachusetts, and eventually at the national level.

Today, the era of fledgling state banks and canal companies may seem distant, but its legacy of corporate power continues in the United States.  Corporations provide an enormously efficient way for private investors to fund innovation, provide services, manufacture goods, create jobs, and make profits.  But over the allocation of labor and natural resources, over the definition of private property, over the distribution of income and wealth, and even over life and death (in health care and in mining safety, for instance), corporate leaders wield great influence far out of proportion to their number in a democratic society – just the way our nation’s corporate founders intended.

An ugg bailey button better be unborn than untaught,for ignorance is the root of misfortune.Genius17 withoutugg knightsbridge education is like silver in the mine. ugg boots man is not made for defeat. an uggs boots man can be destroyed but not defeated.No rational man can die without ugg lo pro button? uneasy apprehension.

Marxism in its theoretical presentation (not in its distorted
practical embodiment by the former
"socialist states") definitely does
<respect> and legally protects <private property of little folk>, as long as that private property is used for those little folk personal needs, and not as the means of production lent to even "smaller folk" to create profits for those little folk, i.e. as a capital.
Learn original marxist theory before
making ignorant statements like that one, Mr. Keuter.

if the terminology was changed from 'corporate' to 'capitalist', the stale marxism would be so patently obvious that few would take it seriously. does this mean the author is a 'marxist' - few people self-identify themselves as such without all sorts of qualifications, almost all of which entail distanicing themselves from crimes committed by marxists. but just because people don't self-identify as marxists, doesn't mean their ideas aren't marxist, and yes, virginia, there is a karl marx and his most fundamental precepts about capitalism underlie most discussions about 'corporations' - which is a word intended to invoke disproportionate political and social influence. what you have learned is anti anti-communism, which is a defense mechanism that inhibits criticism of the marxist ideas by john birching the person who points out that they exist. thus the anti-communist is always irrational, always paranoid, and always has sinister ulterior motives. in the case of myself, i'm just calling an hnn post that associates the rise of american democracy and the american constitution with the spectre of 'disproportionate' corporate power. strip this down to its bare essentials and what we have is a bourgeois democracy, which is marxist historical interpretation 101.

what regulators call for, however, is submission, by one class of people involved in one sphere of human activity that happens to make all the other spheres possible. that is a violation of individual rights and its inevitable historical outcome is the eventual violation of all individual rights.

Mr.Shocket failed to mention that every five years corporations were brought up for assessment as to their efficacy in society. If they were shown to be deliterious,they were disbanded. We could use such assessments now.

His Idea was that unlimited capitalism would sink of its own weight thereby paviing the way for unlimited anarchism not the Lenin-Stalin-Moa dictatorships we know of today. By the way,Marx expected the capitalists to purchase the rope by which they would hang themselves.
Who knows if that will happen in the coming age of Corporate earth. Just imagine corporations with the same "rights" as nations. Their law on their land.

Haven't we heard that million of times before: those who against the unlimited corporate power are all reds/marxists or, at minimum, pink?
At least, as you acknowledged, they had evolved by changing their terminology; such as you have not.

those objecting to 'corporate influence' over the state need to join me in calling for ending state control and regulation of the economy. capitalists that bribe legislators ddo so to protect themselves from legislators, who assume powers to deprive capitalists of their human right to property. the corruption is necessary.

as a matter of fact, those lamenting political apathy might call for the same kind of limits on governmental power : after all, what is political apathy but living your own life without regard for what your government does? and just what is wrong with that? nothing : it's called self-determination. it's real self-determination, as it entails individuals making and living their own lives outside of the inherently corrupting world of political life.

i urge readers to check out ayn rand's essay on the history of railroads and cornelius vanderbilt to get a better sense of how what is labeled capitalist corruption is actually government extortion.