Why Did Rome Fall? It's Time for New Answers

Mr. Heather is professor at Worcester College, University of Oxford, and the author of The Fall of the Roman Empire: A New History of Rome and the Barbarians (Oxford University Press).

The Roman Empire stretched from Hadrian’s Wall to northern Iraq, and from the mouth of the Rhine to the Atlas Mountains of North Africa.  It was the largest state that western Eurasia has ever seen.  It was also extremely long-lived.  Roman power prevailed over most of these domains for five hundred years -- and all this in a period where the speed of bureaucratic functioning and of military response rattled along at 45 kilometres a day, something like one tenth of modern counterparts.  Measured in terms of how long it took real people to get places, the Roman Empire was arguably ten times as big as it appears from the map.

The epic scale of the Empire’s existence has always sharpened interest in its collapse, particularly that of the west, which ceased to exist on the deposition of Romulus Augustulus in 476.  Since Gibbon -- while some role has always been allocated to outside invaders -- explanation has tended to focus on a range of internal transformations and problems as the prime movers in the processes of Roman imperial collapse.  By the mid-twentieth century, causation commonly concentrated upon preceding economic collapse.

This entire vision of late Roman economic collapse was based, however, on assorted references to hyper-inflation in the third century and to various problems associated with the raising of taxation in the fourth.  It has been overturned since the 1970s, when archaeologists developed, for the first time, a method for sampling general levels of rural productivity.  Modern ploughing bites deep into long-submerged stratigraphic layers, bringing to the surface much ancient pottery.  Long-term regional survey projects spent long summers collecting every fragment in the target zones, and every winter analyzing the results.  Once Roman pottery sequences became so well-known that many pots could be dated to within ten to twenty years, and excavations established what surface density of pottery was likely to reflect the existence of a settlement underneath, two things became possible.  Dense pottery assemblages made it possible to estimate the number of Roman settlements in any region, and the dating patterns of those assemblages then made it possible to know when precisely any particular settlement had been occupied.  Against all expectation, the fourth century – immediately prior to fifth century collapse - has emerged as the period of maximum agricultural activity, not the minimum as the old views supposed, for the vast majority of the Empire.  Total rural output, and hence total GIP – gross imperial product – was clearly higher in the later Roman period, than ever before.  It is now no longer possible to explain fifth-century political collapse in terms of preceding economic crisis. 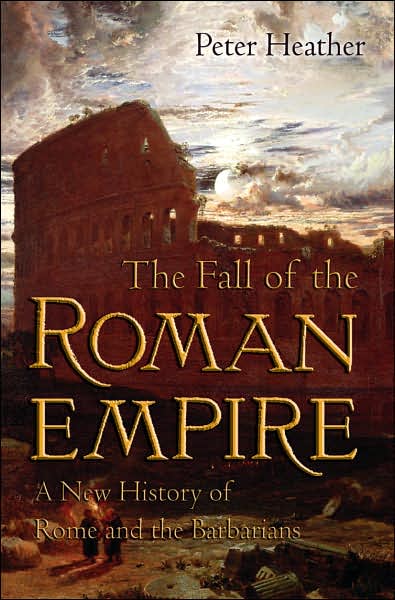 What the hyper-inflation was all about, in fact, was minting enough silver coins to pay an army which was increasing in size out of all proportion to the metalwork stock of silver available.  And this, straightforwardly, was the product of exogenous shock.  From the 230s onwards, the Sassanian dynasty reorganized a huge region of the Near East - Iraq and Iran in modern terms - to create a superpower rival to the Roman Empire.  The new power announced itself with three massive victories over different Roman Emperors, the last of whom, Valerian, was first captured, then skinned and tanned after his death.  The Persian threat was eventually countered by the end of the third century, but it took fifty years of military and fiscal adjustment to mobilize the necessary resources.  This narrower vision of third-century crisis makes much more sense of the overwhelming archaeological evidence for fourth-century prosperity, and, of the brute fact that, even after the fall of the west in the fifth century, the eastern half of the Empire – operating with the same institutions – carried on successfully for centuries.  It also poses Gibbon’s question again.  If there is no sign of major dislocation within the late Roman imperial system of the fourth century, why did its western half collapse in the fifth?

Early in the third century, the traditional cast of small, largely Germanic groupings which had long confronted Roman power across its European frontiers was replaced by a smaller number of larger entities.  This refashioning prevailed all along Rome’s European frontiers, from the new Frankish coalition at the mouth of the Rhine, to the Black Sea where Goths emerged as the new power in the land.  As another large body of archaeological evidence has now shown, much more was afoot here than mere changes of name.  In the course of the Roman period – broadly the first four centuries AD – central and northern Europe saw its own economic revolution.  There was a massive increase in agricultural production, fuelled by an intensification of farming regimes, accompanied by unmistakable signs of increasing differentials in wealth and status between different sections of society, with an ever greater prominence being assumed by a militarized segment of the male population.  It is these broader transformations which underlay the appearance of the new names on the other side of Rome’s frontiers, and most had been stimulated by economic, political and even cultural interactions with the Roman Empire.  These new entities proved much more formidable than those they replaced, operating as only semi-subdued clients of the Empire.  They did contribute to imperial armies on occasion, but also required regular Roman military campaigning and targeted foreign aid to willing kings to keep them in line.  The balance of power in its favor, which had allowed the Roman Empire to come into existence, was being eroded not just by the Sassanians, but also by the new structures of non-Roman Europe.

Some important contingent sequences of events also contributed to the fall of the western Empire.  From c.370, the nomadic Huns suddenly exploded to prominence on the eastern fringes of Europe, generating two major pulses of migration into the Roman world, one 376-80, the other 405-8.  By 440, their different original components – more than half a dozen in total - had coalesced into two major groupings, each much larger than any of the groups which had existed beyond the frontier in the fourth century: the Visigoths in southern Gaul, the Vandals in North Africa, both representing amalgamations of three separate immigrant groups of 10,000 warriors plus.  The immigrants had in the process inflicted great damage on west Roman state structures, by first mincing its armies and then preventing their proper replacement either by ravaging or annexing key areas of its tax base.  This in turn allowed Anglo-Saxons and Franks to take over former Roman territories in Britain and north-eastern Gaul, weakening the state still further.  The immigrants also acted as alternative sources of political magnetism for local Roman elites.  Given that Roman elites were all landowners, and could not therefore move their assets to more desirable locales, they were faced with little choice but to come to terms with immigrants as they became locally dominant, or risk losing their wealth.  In this way, the west Roman state eventually withered to extinction, if not without vigorous martial efforts to restore its fortunes, as its revenues fell away and it could no longer put effective forces in the field.

Without the contingent impact of the Huns, the two main pulses of migration would never have occurred in short enough order to prevent the Roman authorities from dealing with the migrants, which had each group arrived separately, they certainly could.  The important contribution of internal Roman limitations is also clear, not least in the state’s inability to increase agricultural production still further beyond fourth-century levels as crisis began to bite after 400.  The ability of the immigrants to detach Roman landowners politically from their allegiance also reflects the naturally loose levels of control exercised locally by such a geographically vast state encumbered with such primitive modes of communication.  But even giving these points their due weight, external factors – in the persons of the immigrants of 376-80 and 405-8 – were the prime mover behind western imperial collapse.  The Empire’s internal limitations only came into play because the immigrants put pressure on its structures, and there is no sign that, by themselves, these limitations – none of them new - would have been enough to bring the Empire down, any more than they had been over the preceding half a millennium.

The more contingent aspects of the crisis could not have had the same cumulative effect, likewise, without the preceding transformation of Germanic society.  Had the Huns arrived in the second century, the Germanic groups that might then have been set on the march would not have been large enough to survive their initial brush with Roman power.  By the same token, the processes of political amalgamation required to generate warrior groupings of a few tens of thousands, on the scale of the fifth-century Visigoths or Vandals, would have been so complex, involving so many small contingents, that they could not have been completed successfully before the individual groups were destroyed by a Roman Empire, which prior to the rise of Persia, still had plenty of fiscal/military slack in its systems.  There is a strong sense, therefore, in which imperial Roman power and wealth created its own nemesis, by generating opposing forces which were powerful enough to match its military might.  And here, if nowhere else, the fall of Rome might still have lessons which modern Empires would do well to ponder.

What an outstanding article. This helps one see the big picture.
Great Job!!!!!
I will have to buy this book, after I read the pile of Adrian Goldworthy books I just bought.

How does this erudite and ponderous disquisition in any way help ameliorate the destruction of the American civilization by George W. Bush and his minions?

Very simply in the mid 4th century AD Constantine moved the entire Roman government bureaucracy including the Senate and a good part of the military to Byzantium. This exposed Roman Italy for the defenseless shell that it was. This is just my opinion, of course I could be wrong. It's just that the Roman government was not defeated in 420-430; it wasn't there anymore.