Nicholas Fox Weber is the author of The Clarks of Cooperstown, on which the foillowing article is based. 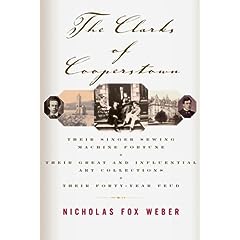 It sounds like a fabrication whenever I mention that, in researching the great art collector Robert Sterling Clark—proud owner of thirty-nine Renoirs and of the only significant altar piece by Piero Della Francesca in America, and founder of a fine and well-known public art museum in Williamstown, Massachusetts—I discovered that, in 1934, he apparently devoted considerable energy to an attempt to have President Franklin Delano Roosevelt overthrown and replaced by a Fascist dictator. The evidence, however, is clear; the only real mystery is why more attention has never been given to the attempted putsch in the White House.

Sterling—as everyone called him—had approximately thirty million dollars at the time, in addition to a valuable art collection, sumptuous houses in America and France, and vast holdings of silver, rare books, vintage Burgundies, and other collectables. He was a bon vivant who took great pleasure in acquiring things and in living well; he was also a man given to intense and consuming rages. A lot of his fury was directed toward his three brothers, with whom he had had a violent dispute concerning family trusts; Sterling was enraged that he could not secure more of the family’s fortune for his wife and her daughter.

The problem was that only direct descendents of his parents could eventually inherit the bulk of his wealth, which consisted mostly of Singer Sewing Machine stock (the Clark brothers’ grandfather had been Isaac Singer’s lawyer, and had, in the middle of the 19th century, taken leadership of the company and made his fortune with it.) Sterling’s vitriol toward his siblings had begun in the early 1920s; a decade later, a lot of his rage was directed at the president he privately referred to as “Rosenfart,” who infuriated Clark because of his attitude toward the gold standard. Sterling was heard to say more than once that he would “spend half of his fortune to save the other half.”

The fifteen million dollars he was apparently willing to spend would go toward payments for an army of retired soldiers—half a million of them—whom he hoped to hire with a number of other rich and prominent Americans. The story behind the plot is complex, but its essence is that Sterling, through intermediaries, had hoped to persuade a retired U.S. General, Smedley Darlington Butler, to head the coup, and that he had indeed funded a lot of research into the formation of Fascist armies abroad. The example that most impressed the man whose trip to Europe he financed was the Croix de Feu, a group of French soldiers who had succeeded in ousting a president.

The story was told in the pages of the New York Times and Time Magazine. The accounts often have a mocking tone, especially about Butler, who was the man who spilled the beans at hearings held by the U.S. House of Representatives in private sessions, where Congressman John McCormack skillfully, and often in outrage, investigated the matter. Names of people associated with the Morgan bank, members of the DuPont family, and the well-known politician Al Smith were also linked to the attempted coup. It became clear that many of these people really thought that Roosevelt, his vice-president, and the secretary of state could all be coerced into stepping down, and then a hand-picked replacement would take charge.

That the putsch did not come about is not itself astonishing. But that it is such a neglected chapter of American history—in spite of books and films devoted to the subject—remains the great surprise. Roosevelt himself wanted to hear little about it; it was as if taking it to heart would make it too real. Perhaps that is still the fear behind the relative silence.

This makes Sinclair Lewis' It Can't Happen Here (1935) a bit too close to non-fiction for comfort. I've read that Lewis' President Berzelius "Buzz" Windrip, who in the novel takes office in '36, may have been modeled after Gerald B. Winrod. Winrod, a right-wing Kansas evangelist, was known as the "Jayhawk Nazi."

Just Maybe......
FDR struck a deal with Wall Street, so they would not oppose his Social Changes......
The Same Deal GW Bush May have made with the Clinton's........
so his legacy will be saved from further investigations of his administration.
look for the neo-con's not to oppose Hillary after all

Smedley Butler later gave a couple of speeches on behalf of the America First Committee.

FDR said there were 2 dangerous men in the US in the 1930s. Huey Long was one, MacArthur was the other.

The complementary corallary is ignorance is weakness,for us. If the general populace were aware of how close we came to a Fascist coupe, if only "The Fraternity" as they called themselves,from Ford to IBM had chosen Douglas Macarther they might have succeeded. Macarther had been the leader of the infamous routing of the WW1 veterans march and encampnent in 1932. Butler,on the other hand despized the use of the USA military for criminal actions for economic reasons. Butler likened his work to Al Capone's but on an international scale.