by Frederick A. O. Schwarz and Aziz Z. Huq

Frederick A. O. Schwarz and Aziz Z. Huq are the authors of Unchecked and Unbalanced: Presidential Power in a Time of Terror.

In June this year, the U.S. Supreme Court struck down two plans, used by school districts in Louisville, Kentucky, and Seattle, Washington, that used race in the assignment of children among school districts.  Chief Justice John Roberts’s main opinion in Parents Involved in Community Schools v. Seattle School District No. 1 (a case that is known as Parents Involved) relied on the 1954 Supreme Court decisionBrown v. Board of Education, and the arguments of NAACP lawyers in Brown, to promulgate a rule of color-blindness.  The holding of Parents Involved is stark:  The Equal Protection Clause of the Fourteenth Amendment, the second of the Civil War Amendments, forbids the state and local school districts from any use of race.  In the cases decided in June, it barred the state from using race as one of several tiebreakers in making student allocations among secondary schools in the context of pervasively segregated housing patterns. 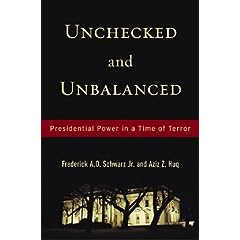 Parents Involved can be criticized in many ways, several of which pertain to the historical legacy of race in America.  For example, the four Justices who hewed puritanically to a jurisprudence of “Original Meaning” imposed a constitutional rule of color-blindness without any historical support; There is, remarkably, not even an effort to support the judgment in historical terms.  They imposed, that is, a substantive vision of equality that lacks sufficient support in the historical constitution, a vision that is clearly aligned with one strand of political thought and feeling today.  Those same Justices also ripped from historical context the arguments of the NAACP lawyers in Brown, and use them in ways that those very lawyers today repudiate.

In more practical terms, the rule of color-blindness they imposed is manifestly implausible.   As Justice Anthony Kennedy noted in his separate concurrence in the judgment, the state does take race into account all the time.  This is not true only when, say, police issue a warrant for a suspect who is Caucasian or African-American.  It is also true in the governmental decisions—e.g., legislative redistricting, to use Justice Kennedy’s example—where state actors  are necessarily conscious of race.  So to say that the state must be, or could be, color-blind is at best a partial account and at worst a distortion of the facts. 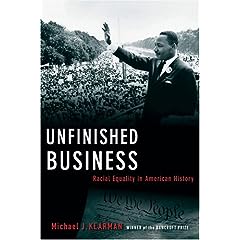 Beyond its elision of original intent, and its implausible account of state decision-making, Parents Involved acts out and validates the basic premise of University of Virginia legal historian Michael Klarman’s brief but superlative primer Unfinished Business: Racial Equality in American History.  Klarman’s premise, sustained through a brisk and effective account of race-relations in the United States since the Founding, is that the Constitution and the federal courts have been fickle friends to racial minorities.  Despite the valedictory hymns now sung to Brown, the Supreme Court has generally read the Constitution against the interests of minorities.  And in any event, courts have only been open social conditions were not “too oppressive” for minorities to get to Court—and in the South, this was long the exception rather than the rule.  Rather than legal change, it has been popular movements, on rare occasion piggy-backing on sympathetic judicial decisions, that have edged the country away from racial injustice.  But this progress has been fitful, as often backward as well as forward.

Parents Involved validates this premise because it shows how little the Supreme Court is willing to do in the name of racial justice today.  Today, there is no strong national consensus about racial injustice, as there was in the Cold War era.  Then, as Klarman cogently explains by drawing on the research of Mary Dudziak, Carol Anderson, and others, promoting racial justice chimed with the national interest in projecting a certain image internationally in the cause of the Cold War.  The result was a rough union of judicial, political, and popular sentiment.

After Katrina, by contrast, the United States turned down aid from Greece and allowed aid from Italy to spoil despite the enormous and evident needs in New Orleans.  The image of the strength projected by the United States not only can dispense with domestic racial justice, it could impel actions harmful to its fulfillment.

It is telling, moreover, that both Chief Justice Roberts in his main opinion and Justice Breyer in his dissent stress how marginal race was in the calculations of Seattle and Louisville; in the 2001-02 school year in Seattle, for example, only 52 students were affected by the use of race.  The policy that triggered reams of Supreme Court reasoning in Parents Involved was incremental, a peeling band-aid tacked onto the edge of a near mortal wound.  And yet the Court still said it went too far, and still struck it down.

At the same time, Parents Involved demonstrated a profound ignorance of the history that Klarman recounts (which is provided in greater detail in his Bancroft Prize-winning From Jim Crow to Civil Rights: The Supreme Court and the Struggle for Racial Equality.  Ironically, just as a majority of the Justices were proving Klarman’s central thesis, that is, they were ignoring its normative lessons: race continues to count, and it is simply too facile by far to say, as Chief Justice Roberts did that “[t]he way to stop discrimination on the basis of race is to stop discriminating on the basis of race.”
Klarman’s account, which could be effectively used in classrooms from high schools to law schools, suggests that the problem of race is not close to being solved.  On this count, Parents Involved gives no comfort.  The decision, indeed,  has an important systemic consequence that is not immediately evident:  It means that the Constitution operates as a one-way ratchet to protect accrued race-based privilege and to prevent the remediation of race-based harms.

Under the aegis of the “color blind” Constitution installed by the Parents Involved Court, legislators’ efforts to undo the harms of race are subject to intense judicial scrutiny.  Legislators’ remedial efforts are presumptively suspect, and they must surmount a near-impossible evidentiary barrier in order to base a measure upon race.  By contrast, under earlier precedent, plaintiffs who complain about the racially disparate effect of a state policy (to say nothing of the lingering effects of discrimination), must make a heavy evidentiary showing.  The principal practical consequence of the Equal Protection Clause today, in short, is that it is hard to challenge the harms of state racism and almost impossible to remedy private discrimination.

As Klarman’s title indicates, the legacy of slavery, Jim Crow, and private racism (often sanctioned with a wink and nod by the state) remains powerful.  While the growth of new ethnic minority, in particular Hispanics, muddies the clarity of previously binary political dynamics and policy analyses, it remains true today that race is a major determinant of life-courses.  The most brute demonstration of this is the criminal justice and carcerel system, which Berkeley sociologist Loic Wacquant has termed the major “race-making” institution of the day: the lineal decision of the ghetto, Jim Crow, and slavery as a means of targeting, enclosure, and classification of African-American communities.  According to estimates by the United States Department of Justice, one in three black males can expect to go to prison at some time during his life, as compared with one in six Hispanic males and one in 17 white males.  So long as this remains the case—and there’s little evidence that judicial action will change it—Klarman’s book will remain necessary reading for judges, students, and citizens.

At one point, racial discrimination meant unjust treatment. Unjust treatment is another way of saying unmerited treatment. The only demonstrable, provable, certain and legally remediably racial discrimination that exists in America today is discrimination in favor of black Americans and against white Americans. People who are simply less deserving by objective measures are given preference for government bestowed privilege on the basis of skin color. Instead of calling this the flagrant injustice that it is, anyone who points it out is labeled a retrograde racist - despite having never done anything in their lives to deter any black American from realizing their potential.

Since this kind of incentive sapping privilege is inherent in the school systems, black Americans understandably perform poorer in schools, which (like the prison statistics cited in the article) then becomes statistical justification for exacerbating the problem. In other words, since black GPA's or SAT scores or men enrolled in college are all low, we need to intensify the discriminatory policies that are supposed to give them a leg up when their legacy demonstrates their ineffectiveness.

In using "the" past to justify de jure discrimination, its advocates are simply establishing a new past for which new martyrs of history may claim justification for getting what they don't earn. In other words, discrimiation begets discrimination, so if you're actually serious about stopping it, you stop it.

3. people continue to pay taxes to a school from which they are denied equal opportunity because of race

4. whenever those people resent it, they realize that it is their fault because they were born white, which is the sole determinant of all of their success in life.