Mr. Kanstroom, a law professor, teaches Immigration Law and Human Rights Law at Boston College Law School, where he also is the Director of the Human Rights Program and an Associate Director of the Center for Human Rights and International Justice. His latest book, Deportation Nation: Outsiders in American History (Harvard University Press 2007) describes the history of deportation in the United States.

Much current immigration debate seems based on two misconceptions: one factual, the other theoretical.  As talk has increasingly turned from structured work programs with pathways to citizenship to border control and national security, one often gets the impression that virtually no enforcement is taking place. Quite the opposite is true: we are in the midst of a massive, decade-long deportation experiment that is exceptionally harsh by virtually any historical or comparative measure. Indeed, many millions of non-citizens, their families, and their communities have already felt the dreadful power of this system.  A second misconception is more subtle, but perhaps more pernicious: it is the idea that the “rule of law” embodies only punishment for mis-deeds, rather than proportionality, procedural fairness, and the rejection of Draconian “one size fits all” solutions to complex social problems. 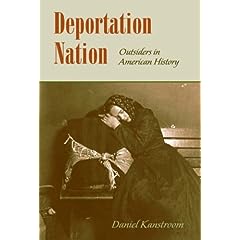 How might we measure the scope and harshness of our deportation system? The numbers are surprising. According to government statistics, from 2000 through 2005, the number of “deportable aliens” expelled from the United States was over 6.5 million people (including formal removals and so-called “voluntary departures.”)1   More than 350,000 people now face formal removal proceedings each year, and tens of thousands more are deported through summary processes, such as “expedited removal.”

The system combines two very different forms of deportation—extended control of the border and social control of otherwise legal residents.  These are unfortunately often conflated in public discourse over “illegal aliens.” Many legal permanent residents have been deported for crimes—sometimes serious, but often shockingly minor. Indeed, the Supreme Court recently ruled that the government had wrongly deported people for misdemeanor drug offenses. But the Court provided no remedy for those deportees or their families.

From 1997 through 2005 more than 672,000 non-citizens were deported for criminal conduct. The majority of such deportations were for non-violent offenses.  The government does not reveal how many of these deportees were legal residents, but there is no question that many, probably most of them, were. A 2006 study analyzed the use of so-called “aggravated felony” charges 2 in formal removal proceedings against 156,713 people and found that some 70 percent of those charged had lived in the United States for more than a decade. The median length of residence was fourteen years.3   Human Rights Watch has estimated that some 1.6 million spouses and children living in the United States were separated from their parent, husband, or wife because of these deportations.

Another way to assess the current system is to consider how it functions.  For various reasons, deportation has long been a legal anomaly—standing outside many protective norms of the legal system.  Tens of thousands of non-citizens face mandatory detention every day with no possibility of bail as their cases meander through administrative courts. Less than half have lawyers and none have the right to appointed counsel.  Suppression of illegally-seized evidence is impossible in most cases.  There are no “Miranda” rights; no “selective prosecution” defenses for those who may have been singled out for political or religious reasons; and no right to a jury trial. Deportation may be retroactive—you can be deported for something that was not a deportable offense when it happened. For many, there is no possibility of mercy from an immigration judge, no matter how compelling their situation.  And, for a wide variety of complicated legal questions, there is no judicial review of Department of Homeland Security decisions at all.  The consequence of deportation is frequently life-time banishment from this country.  Each year, our system sends many thousands of U.S.-raised young people—now rootless and without social support—to places they may have never known, facing languages they cannot speak, in cultures they do not understand.

Why has this system developed in this way? One might assume that the hardening of the deportation system was a response to the September 11 attacks but this is not correct.  Though we can trace its direct roots back to the late nineteenth century exclusion of Chinese workers, the major changes in modern deportation law actually occurred in the 1990s.  In the aftermath of the Oklahoma City bombing—perpetrated by home-grown U.S. citizen terrorists—unusually tough deportation laws were passed by a Congress many of whose members now admit that they had little or no understanding of what they were voting for. “Get tough” policies resonate powerfully until politicians or their constituents personally feel the brunt of harsh, unforgiving laws. Still, it is much easier to enact hard laws than to repeal them, especially in the absence of strong leadership towards a sophisticated, comprehensive immigration policy.

And what of the basic “rule of law” principle espoused by Lou Dobbs, Tom Tancredo and others?  Isn’t it a simple equation: they broke the law therefore they must be deported?  Well, for one thing, the procedural deficiencies in our system might give pause, as we learn of  U.S. citizens who have been deported by mistake and of shockingly wide disparities in decisions among immigration judges. More fundamentally, those of us who support a robust vision of the nation of immigrants and a rich, humane version of the rule of law do not—and should not—minimize the concerns about border control and respect for law. These are major, core responsibilities of the national government. But this does not mean that government agents should be given carte blanche to ignore basic legal protections.  As James Madison put it, when critiquing the Alien and Sedition Acts, “[even if] aliens are not parties to the Constitution, it does not follow that the Constitution has vested in Congress an absolute power over them....”

True national security requires more than fences, walls, and harsh deportation raids.  Consider the recent workplace raids in New Bedford, Massachusetts, not far from where I live.  As part of “Operation United Front,” the New Bedford raid mobilized hundreds of Immigration and Customs Enforcement (ICE) agents from around the country to arrest some 360 non-citizen workers. The irony of the operation’s name surely would have struck the deportees, their families, and communities. Mothers were separated from babies; husbands were unable to contact their wives, causing what community groups called “a humanitarian crisis.”  Many were summarily transferred to detention centers in Texas before lawyers could meet with them.  Indeed, in an unusual reversal of the typical state/federal relationship in immigration matters, Massachusetts social workers felt compelled to travel to Texas immigration detention facilities to ensure that the children of the detainees were receiving adequate care.  Many of those children and other family members are U.S. citizens.  Is our national security really enhanced by the destruction of their families?   Shouldn’t the law embody at least the possibility of humane discretion and proportionality?

As we continue to debate what it really means to be a nation of immigrants, we must pay more attention to the growing deportation system and its devastating effects on families and communities.  Deportation is a clumsy and brutal back-stop for failed border control and ineffective bi-lateral economic policies with Mexico.  It evokes the maxim that, when the only tool you have is a hammer, everything tends to look like a nail.   Moreover, it continues to have corrosive effects on legal protections we have developed over many centuries. As Supreme Court Justice Frank Murphy once wrote: “Only by zealously guarding the rights of the most humble…and the most despised among us can freedom flourish and endure in our land.”

1 Voluntary departure is something of a euphemism, as the alternative is forced removal
These charges are the most serious in terms of consequences, but very minor crimes, such as petit larceny and drug possession, can be aggravated felonies. See 8 U.S.C. § 1101(a)(43) (2000).

The vast majority of these people are "accessing" our social safety networks. Put another way: THEY ARE STEALING FROM US. They want in-state tuition, AND a GRANT. Its time to go HOME.

Nonsense. Most immigrants are unskilled and are looking for work.
They are the low-paid laborers who perform tasks such as picking the lettuce few American citizens would want to do. They also work in the construction and other labor-intensive industries.
Whatever these workers are doing, they are not going to school, so they are not looking for in-state tuition and grants.
And as Julian Simon pointed out, they are not net tax consumers. They pay taxes (yes, even off the books workers consume stuff and so pay sales and excise taxes; and rent property and so pay the gross rents out of which property owners pay property taxes).
All forms of taxation are theft, so they are getting ripped off, just like people who work in the private sector and pay taxes (net taxes) and so support tax-consuming New Class parasites, who pay in-state tuition and receive government-pilfered (and taxpayer-paid) grants.

How can people act put-upon when they are told to return home. The vast majority of these people are "accessing" our social safety networks. Put another way: THEY ARE STEALING FROM US. They want in-state tuition, AND a GRANT. Its time to go HOME.

Politicians and Americans for that matter should take a look at "American Harvest." Its a non-partisan feature length documentary about immigration as it relates to agriculture. It presents the facts as they are without political bias.

Anti-immigration sentiment sweeps across America. A journey from Florida to New York, including a trip to the Mexican border, reveals the lives and issues of legal and illegal migrants and farmers working toward a better life. Is the immigration system in America flawed? Immigrants are dying to feed America.

American farmers and agriculture rely on immigrants to do jobs that Americans won't do or feel that are simply beneath them. Some only see the problems in the news from the perspective of those extreme points of view of the left and the right side of our political system.

Discrimination of immigrants has existed in the United States since the English persecuted the Irish. It was once generally considered that if you were Greek or Southern Italian you were not white.

American Harvest points out the inconsistencies of the current policy on immigration. See the changing face of immigrant America as it relates to Agriculture.

Follow legal and illegal farm workers and the farmers caught in the middle of a flawed immigration policy.

Every farmer I have spoken to wants to secure our borders. But they also want a workable solution to LEGAL immigrant labor.

Americans have to understand that we all need to appreciate and respect those people who grow and harvest our crops.

The men and women that put food on our kitchen tables deserve no less.