MLK Was Both a Talker and a Doer, Hillary

University of New Hampshire Professor of History Harvard Sitkoff is the author of several books on the history of civil rights, and, most recently, of King: Pilgrimage to the Mountaintop (Hill & Wang, 2008). 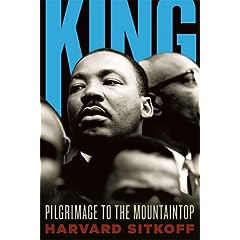 According to Hillary Clinton’s version of history, Martin Luther King, Jr. was a dreamer, a talker (much as she labels Barack Obama), and the person really responsible for civil rights progress in the 1960s was President Lyndon Johnson, a doer (as she sees herself). This comment on history highlighted herself as the experienced candidate of accomplishment, and it may well have helped her to succeed in scoring an upset victory against Obama in the New Hampshire primary. Nevertheless, she fails U.S. History 101.

MLK was never a mere dreamer, never only a talker. He stood up for what is right, repeatedly putting his body on the line, going to jail again and again, constantly facing death threats. By such actions, King and a multiplicity of black leaders and movements at the grass-roots level mobilized black Americans as they had never previously been mobilized to collectively bring about change. King, above all, stirred African Americans’ emotions, raised their hopes, convinced them to believe in their abilities to alter history, and got them to come together to press for racial justice in a manner that could not be, and was not, denied.

Organizing mass demonstrations, encouraging an unprecedented burst of African American activism, and employing non-violent direct action tactics, King and those who struggled alongside him in 1963 in Birmingham and elsewhere provoked a national outcry that forced the Kennedy administration to propose a comprehensive civil rights bill. Intensifying the pressure on the Johnson administration to make the bill “must” legislation, King and his followers launched another protest campaign in St. Augustine in 1964. The strategy worked, and the historic Civil Rights Act of 1964 ended legally sanctioned racial discrimination and segregation in most public accommodations and facilities, outlawed racial bias in federally funded programs practicing discrimination, banned discrimination by employers and unions, created the Equal Employment Opportunity Commission to enforce the ban on job discrimination, and granted the federal government new powers to fight school segregation.

It took a whole lot of ordinary black Americans, as well as King and Johnson, to achieve that legislation. The Civil Rights Act, King rightly said, “was first written in the streets.” It reflected the impact of a national conscience that had been educated and inspired by the civil rights movement and its leaders. That was similarly true of the equally historic Voting Rights Act of 1965. It was never a simple matter of talk or action, a dreamer versus a doer. No one should deny Lyndon Johnson’s skillful use of presidential, and personal, powers to break a southern filibuster in the Senate and to get the civil rights bills through Congress in a timely and unscathed manner. Nor should Americans forget what this young African American Baptist preacher did to inspire ordinary blacks to do the extraordinary, to struggle collectively for equality and first-class citizenship. Vitally worth remembering as well is all King did to attract the great middle body of white public opinion to make civil rights---in the words of the Republican leader of the Senate, Everett Dirksen, quoting Victor Hugo---“an idea whose time had come.”

Perhaps Hillary Clinton has got her history of the 1964 Civil Rights Act wrong because she had been so enthralled that year by Barry Goldwater. An “active Young Republican” and “a Goldwater girl right down to my cowgirl outfit,” as described in her memoir, Clinton supported the presidential candidacy of the most vociferous Republican opponent of the civil rights bill in the Senate, the right-winger who made criticism of civil rights the centerpiece of his bid for the White House. And even in 1969, after switching party allegiances Clinton chose to use the occasion of her Wellesley University commencement address to talk mainly about course requirements and grading, not about King or civil rights.

Its time for all Americans to recognize that King, hardly a mere dreamer, moved the conscience of a generation. In the face of great odds he altered American habits of thought and action more than any other figure of his century, and made the United States far more just, democratic, and egalitarian. He and the Movement are truly worth celebrating.

LBJ was able to de-fang southern committee chairmen in key positions who opposed civil rights, and to thwart filibusters. Could any other president have done that? It's doubtful. Had it not been done, would there have been a Civil Rights Act (and subsequently a Voting Rights Act)? Certainly not, at least not in 1964/1965 (and not under a Nixon, Ford, Carter, Reagan, or any Bush, or under Bill Clinton with a reactionary Congress)--as for JFK, as inspiring as he was, he had given no evidence of the enormous legislative skills that LBJ possessed.

Didn't Dr. King's dream "begin to be realized" with that Act?

Why is it so difficult for some people to recognize that many people deserve credit (and, to be sure, blame?). Implying that it's EITHER King or LBJ who fostered civil rights is not only a strawman argument, it's nonsense, and poor history. As a matter of fact, Sitkoff DOES give LBJ credit in his essay. It's his distortion of Clinton's comments that is unfortunate.

Professor Sitkoff's spot-on historical analysis is not a "srawman" argument. Clinton’s misrepresentation of Dr. King's role was her use of the word "began." She stated that, "Dr. King's dream began to be realized when President Lyndon Johnson passed the Civil Rights Act of 1964." I think most history professors – like Professor Skidmore - would take major points off if they found that sentence in a student essay on the modern civil rights movement. Thus Professor Sitkoff is correct in his assessment of her History 101 grade. She obviously never read his book "The Struggle for Black Equality."

King held a Ph.D. from Boston University, which investigated the charges of plagiarism. The conclusion was that, while there were questionable parts, the dissertation nonetheless represented a contribution to knowledge, and King's Ph.D. should stand. I accept the university's conclusion.

Yes, there was (and is) racism outside the south, but anyone who truly believes that it was "every bit as virulent and malicious as its 1960s Southern counterpart," simply doesn't know what he is talking about.

I do. I was at Selma (albeit briefly) a week before the violence at Pettis Bridge, and taught (with tenure) at the University of Alabama from 1965 to 1968. I've lived many places, and nowhere was "1960s racism" more virulent than in the Deep South--as anyone should know.

It was there that for the first time, I had to face down a gun-wielding would-be assailant, and that was the only time that such an experience ever resulted from my support for civil rights. Now THAT is virulent racism! (Other times were simple street crimes, none successful, and no one hurt.)

We are accustomed to seeing the Rev. Dr. Martin Luther King, Jr., referred to as "Dr. King". In light of the proof that he plagiarized his doctoral thesis, shouldn't intellectuals (at least those who DIDN'T plagiarize THEIR theses) call him "Rev. King" instead?

While we're at it, can we ask when Rev. Sharpton will be honored for his struggle against Northern racism -- every bit as virulent and malicious as its 1960s Southern counterpart? And Rev. Sharpton doesn't have the unfortunate character flaws of Rev. King.

Certainly Americans should celebrate Dr. King's solid accomplishments (and those of many others in the civil rights movement as well), and certainly Obama is an inspiring candidate. We should celebrate, also, the fact that a major party will nominate either an African-American or a woman.

We should not, however, distort comments by one candidate to support the other. Sen. Clinton pointed out the importance of presidents and the roles they play (can ANYONE doubt that the world would have been different with a President Gore?). She absolutely did not call Dr. King "merely a dreamer," nor did she diminish his actions. Rep. Rangel's response to these charges was on target.

One can support, or oppose, without resorting to straw-man arguments, which inherently are intellectually dishonest.

I thought Senator Clinton's explanation of the relative contributions of LBJ and MLK to civil rights legislation about as compelling as President Reagan's analysis of the causes of air pollution (trees, remember?). My analogy is, I confess, unfair to trees and LBJ, and I think Senator Clinton does have a better brain than Reagan's--and a capability to use it. Still, she had better start.