What It Takes to Be President

Mr. Shenkman is the editor of HNN and the author of Presidential Ambition: Gaining Power at any Cost (HarperCollins). His latest book is: Just How Stupid Are We? Facing the Truth About the American Voter (Basic Books, June 2008).

Thursday April 16, 1953 was going to be a crazy day anyway, one of those days only presidents put themselves through. First Ike would have to fly from Augusta, Georgia to Washington—he was in Augusta playing golf, of course—to give a big speech about foreign policy. Then there would be a limousine caravan, a couple of ceremonial appearances, another speech or two, and finally the flight back to Augusta. 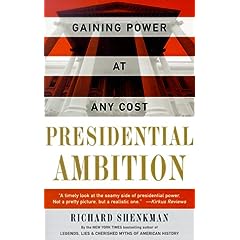 It was an especially crazy day for a president as old as Ike—he was sixty-two then—and for a man with his medical history. In 1949, though the voters never heard about it, he’d had what apparently was a mild heart attack. As he eventually was to admit—this was in 1967, long after he was out of politics—he had been so ill in ’49 “my physician treated me as though I were at the end of the precipice and teetering a bit.”

Then, the night before leaving for his trip up to Washington he was awakened by sharp pains in his chest. For a couple of hours he just tossed and turned. Then he called over Mamie, who was sleeping in another bed. Finally, he called in Howard Snyder, his personal physician. Snyder at first guessed it might be food poisoning and gave Ike a tonic to counteract the poison. Subsequently Snyder was to change his mind and conclude it was probably ileitis, a painful abdominal illness caused by the accumulation of rough food in the small intestine. Which wasn’t a bad guess. A few years later Ike was to suffer from ileitis and would have to undergo an emergency operation to remove a stubborn blockage. But his problem this time wasn’t ileitis. It was his heart again, he’d suffered a mild heart attack—his second, counting the incident in 1949.

Whatever the problem Ike was obviously in terrible pain and should, of course, immediately have been whisked to the hospital for an examination. That was common sense. A guy who made a buck an hour would have been sent to the hospital if he were suffering intense chest pains. So certainly Eisenhower should have. He was after all ... The President of the United States ... Leader of the Free World ... The Man with His Finger on the Button.

Only the thing is a president can’t just up and go to the hospital when he’s sick like it’s no big deal. Everything a president does is a big deal. If he sneezes people take notice. If he vomits in the lap of a Japanese official at a diplomatic dinner, as George Bush was to do, the stock market may even take a dive. When in 1955 Ike was to suffer his big heart attack the market would drop more than it had since the Crash of 1929. And Ike wasn’t just sneezing. He had chest pains. Go to the hospital with chest pains and the whole world would be alarmed. There’d be news bulletins. Special newspaper editions. Press conferences with doctors and specialists. It’d be a media circus.

Besides, there were political reasons for not going. Ike had been president just three months. Go to the hospital and there’d be questions about his ability to finish out his term. There already was a lot of loose talk that his age made him too old to be an effective president. Because the attack had occurred while he was on vacation, people would think that he wasn’t even up to golfing. Oh, nobody would say it out loud. Ike was a war hero. People respected him for the service he’d given the country. And everybody liked him. Smiling Ike—what was there not to like? But people would be thinking: Maybe he is too old, simply too old. Roosevelt after all had died when he was sixty-three. Ike was now sixty-two.

Of course, he would have to cancel his schedule—that crazy presidential schedule he had. Only the thing is a president can’t just cancel his schedule and announce he needs a rest anymore than he simply can decide to go to the hospital with chest pains. Once a president announces he’s going somewhere he usually has to go, especially if he’s set to give a big speech—and Ike was. Stalin had died the month before and Eisenhower wanted to extend an olive branch to the leaders who replaced him. Cancel any speech and there’d be questions. Cancel this speech, which had been advertised in advance, and the world would wonder what was going on inside this new administration. Was Ike really sick or was he having trouble deciding on a policy toward the Soviet Union? Was his administration’s foreign policy in disarray? The fact was his foreign policy was in disarray. Ike wanted to commit the United States to world disarmament, negotiation and peace and his secretary of state, John Foster Dulles, did not. Just a few days earlier Ike had exploded in anger at Dulles’s opposition. “All right, then,” he had said. “If Mr. Dulles and all his sophisticated advisers really mean they can not talk peace seriously, then I am in the wrong pew. For if it’s war we should be talking about, I know the people to give me advice on that—and they’re not in the State Department. Now either we cut out all this fooling around and make a serious bid for peace—or we forget the whole thing.” So although Ike should, of course, have canceled his schedule, he didn’t, of course, actually do it.

The funny thing was, he didn’t even want to. It was a challenge to go and Ike loved challenges. The more difficult a task, the better he liked it. So he went. It appealed to his sense of duty. And Ike had a powerfully strong sense of duty. Convince him that he had a duty to do something and Ike would always do it, no matter how arduous he had to work, no matter how great a sacrifice he had to make.

Wednesday, the day before his heart attack, had been an easy day for Ike, as Robert Caro might put it--a day spent on the links. But Thursday was to be a hard day. That morning, just hours after the attack, in tremendous pain, he dressed, ate breakfast, and boarded a plane for Washington. It was a difficult flight. When he had first got on he was in pain but hopeful the pain would subside. But instead of easing, it grew worse. By the time he reached the Statler Hotel where he was to give his address at noon he could barely stand. He had been given “medicines and sedatives,” but they hadn’t worked. They couldn’t. They were prescribed for a patient suffering from food poisoning and Ike hadn’t had food poisoning. He’d had a heart attack. Heart medicine probably would have helped but he hadn’t been given heart medicine because nobody realized he had heart pain.

From the very beginning of the speech it was obvious to the audience that Eisenhower was having difficulty delivering it. And then it became more obvious. The pain became so great, Ike recalled, that it caused “heavy perspiration on my face and head.” Then he began suffering chills “of a very disturbing kind.” Then his voice actually started to falter. A friend, Bobby Cutler, his national security adviser, noticed his hands. They were gripping the lectern so tightly it appeared he actually needed the structure to keep from falling over.

Somewhere in the middle of the speech it occurred to Eisenhower that he might actually not be able to finish it, that he might even collapse. He was feeling dizzy; “at times I became so dizzy that I feared I would faint.” “I could concentrate on the text only by supreme effort.” So he started skipping whole paragraphs. But he wouldn’t stop, wouldn’t even think of stopping. And eventually he made it to the end.

Given all that was at stake it was perhaps understandable that Eisenhower felt compelled to make his speech. But what took place next was inexplicable. Truly crazy, really. Instead of suspending the rest of his Thursday schedule Ike kept strictly to it. He was ill. He knew he was ill. But seemingly he wanted to pretend he was not. And somewhere inside himself he found the drive to keep going.

Sticking to the schedule would be difficult. For Thursday was not only a hard day, it was a long day—a very long day. It had started early in the morning in Augusta, Georgia. Then Ike had flown to Washington. And now he was to travel to the capital's Griffith Stadium. It had been a tradition since William Howard Taft for the president to throw out the first ball at the opening season of the American League. And Ike felt “since my promise had been given weeks ahead ... it would be putting too important an interpretation on what I thought was a temporary illness if I should cancel the engagement.” But then he had gone ahead and thrown out not just one ball, but two balls, the first a long and high throw to an outfielder.

And then he continued on. He boarded his plane again and flew down to Salisbury, North Carolina. Whatever his reason for keeping his date with the American League, he had no real reason to keep his date with Salisbury. He was there after all to celebrate the 200th anniversary of Rowan County. But he kept it. He even gave a little speech there. Then, he took yet one more plane ride, this time to return to Augusta, where his long, hard day had begun. In the course of twelve hours he had taken three plane rides, crossed seven states. and made two speeches—and all this just hours after suffering a heart attack.

Upon returning he did, of course, collapse. The administration spokesman insisted to reporters that the president was only suffering from food poisoning—nothing serious boys, just a little ole case of food poisoning. Everybody can just relax. Ike’s doing fine. Just fine. For several days Ike lay in bed recuperating. Fortunately, it had been a mild enough heart attack that he didn’t need months of relaxation as he had in ‘49. Inside of a week he was up and around.

But there is no such thing as a mild heart attack to the man who has suffered one. One heart attack may be worse than another, but they are all bad, all frightening. Years later, when Ike was compiling his memoirs, he had to revisit that awful day he’d spent crossing seven states in twelve hours after enduring a heart attack. And it brought back terrible memories. That day, he was to write, was “one of the most miserable” of his entire life.

Eisenhower provides his own account of what happened in Mandate for Change: 1953-55 (1963), pp. 147-48. See also: Robert Ferrell, Ill-Advised: Presidential Health and Public Trust (1992) , pp. 53-72; John Emmet Hughes, The Ordeal of Power (1963), pp. 107-15; Herbert S. Parmet, Eisenhower and the American Crusades (1972), p. 278. I should note that there is considerable disagreement about whether Ike actually had heart attacks in 1949 and 1953. Snyder always insisted he did not and for years no one rose to dispute him. In the 1990s Ike’s cardiologist in the White House, Dr. Tom Mattingly, reviewed Eisenhower’s heart records and came to the conclusion he probably had had a heart attack in 1949 and almost certainly did in 1953. Ferrell cites Mattingly approvingly as does Robert E. Gilbert in Mortal Presidency (1992), though Gilbert refers to the 1949 and 1953 episodes as “mystery” illnesses.