Why It's Time to Rethink the 70s


by Bruce Schulman and Julian Zelizer

Why publish a book about one of the most underappreciated decades in contemporary American History? Until very recently, the 1970s seemed like little more than a cruel joke. When they thought about the period at all, historians, pundits, and the great majority of American citizens dismissed the decade as a bizarre interlude between the liberal achievements and eventual crack-up in the 1960s and the conservative revolution of the 1980s. The 1970s meant bad hair, bad music, and especially bad politicians (whether you defined bad as corrupt, clumsy, or incompetent.) Outside of some powerful, seminal movies, the period appeared to offer little that was worth writing about. 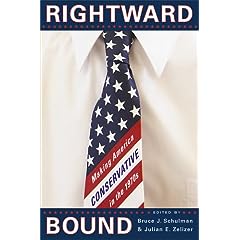 But in recent years that situation was starting to change. No longer supplying the punch line of jokes, the 1970s started to become an unexpected growth industry in historical scholarship. In addition to new books by senior scholars such as James Patterson and Edward Berkowitz, a generation of creative young historians is focusing on this pivotal period. Our own books, On Capitol Hill and The Seventies, emphasized the period's importance to the nation's political and cultural history. Driven to revisit the decade both by a rethinking of historian's conventional assumptions about recent American history and curiosity about the origins of today's confusing political and cultural landscape, scholars have begun tearing down the obstacles to serious engagement with with what many had termed the "wasted decade."

Many factors contributed to the studied neglect of the seminal 1970s. First, there was the bias inherited from popular culture. Disco, the Brady Bunch, the bumbling portrait of Gerald Ford on Saturday Night Live, the exploding Ford Pinto, Jimmy Carter's "killer rabbit": these familiar signals of a vapid public arena surely informed how scholars themselves looked at these years. Whereas numerous films and documentaries captured the excitement and significance of other recent decades, the 1970s--outside of Watergate--rarely received such reverential attention.

Another reason for the scholarly bias against the 1970s concerns the peculiar focus of political historians. Scholars still tend to focus on presidents, their top advisers, and the exercise of executive power. As a result, the 1960s--a period that features the Camelot of John F. Kennedy and the tragedy of Lyndon Johnson--or the "Reagan Revolution" of the 1980s attracted more interest than a decade filled with corrupt or lackluster presidencies. Bob Dole, the long-time Senate Republican Leader and 1996 presidential nominee neatly, summarized this view when he described Presidents Jimmy Carter, Gerald Ford, and Richard Nixon respectively as "See No Evil, Hear No Evil, and just Evil." While recent scholarship is clarifying the complexity and the pivotal nature of those presidencies, the initial impressions proved very influential.

The 1970s also flew under the radar because the decade's key developments challenged the way that many left-leaning historians conceived of conservatism. Coming from political perspectives unsympathetic to conservatism, most historians depicted the movement either as a product of manipulative elites who capitalized on anger about race and taxes, or as the product of a charismatic leader such as Ronald Reagan who persuaded voters to join a cause that might not even serve their interests. But focusing on the 1970s reveals a very different picture, one that depicts conservatism as the product of a true movement mobilization. Once dismissed as an extremist ideology, the New Right emerged in the 1970s as a potent political movement; it built a formidable organizational infrastructure (foundations, political action committees, radio and television shows, think tanks), pioneered new tactics (direct mail and a host of innovative volunteer operations), and rewrote the agenda of national politics.

Over the past few years, however, many of these barriers have fallen; a wide variety of historians--scholars of politics, religion, popular culture, foreign policy, race relations, and the environment--are giving the 1970s energetic attention. Why has interest suddenly emerged? First and foremost, the field has witnessed an important generational change. The current young scholars, many of them featured in our book, came of age during the 1980s. They were not rooted in the lingering debates of the 1960s and more willing to look closely and seriously at the origins of conservatism. Because these scholars were not products of the Baby Boom, they were also willing to de-center the 1960s--to see recent United States history as something other than the replaying of that fabled decade.

That generational shift also fed a hunger for new, unexamined material and the 1970s offered the perfect venue for such ambitions. Here was a decade when big things clearly happened, with untapped archival material beginning to emerge, but one that remained wide open, a time and place where scholars had not focused their attention.

Finally, the effort to unravel contemporary conflicts--to understand the contested political and cultural terrain of the United States in the early twenty-first century--has nourished new interest in the 1970s. Just as historians of the civil rights era re-examined the legacies of slavery and segregation, today's scholars hope to solve the puzzles they find in the headlines by probing their origins. The seeming incoherence of our era--defined at once by the considerable achievements of conservatism in shaping American politics, diplomacy, and social life and the tenacity of liberal policies, institutions, and cultural attitudes--repeatedly drove scholars back to the seminal developments of the 1970s.

Locating conservatism in the 1970s, as we do in our new book, produces a more nuanced and telling picture of the movement than a focus on the 1960s or 1980s. During the 1970s the United States experienced what we have called an "incomplete revolution." Conservatism took hold in a period when liberalism retained considerable strength. Conservatives did not so much remake America as they layered in new ideas, policies and institutional structures over the fabric of liberal America. The resulting tensions would shape national life for a generation, explaining how the United States could simultaneously impose restrictions on stem cell research and embrace Desperate Housewives, resist energy conservation and intervene in Iraq, while resisting changes to Social Security and abortion rights. The more we learned about contemporary America, the more the 1970s emerged as a key to unlocking these paradoxes.

So, we are delighted to introduce this book to scholars, students, general readers who wish to explore--and reconsider--these fascinating years. We hope that this book opens a conversation about the decade, and the entire post World War II era, with some very exciting and original essays.