The Worst Massacre of Blacks by Whites in U.S. History--And the Lesson It Teaches Today

Mr. Lane is a member of the Washington Post editorial board. This essay is adapted from his book The Day Freedom Died: The Colfax Massacre, The Supreme Court and the Betrayal of Reconstruction (Henry Holt).

On April 13, 1873, the United States experienced the worst one-day slaughter of blacks by whites in its history. In tiny Colfax, La., white paramilitaries attacked lightly armed African American freedmen who had assembled in a local courthouse to defend their elected officeholders. By the time the Colfax Massacre was over, more than 60 black men lay dead. Most were killed after they had surrendered. 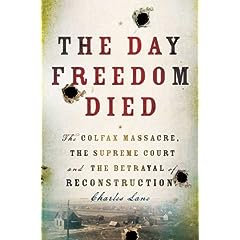 Perhaps even more shocking than the bloodshed in Louisiana was the ultimate resolution of the case. Initially, Northern public opinion was outraged, and the Grant administration vowed swift punishment for the guilty. But as Louisiana whites rallied around the massacre’s perpetrators, the costs—financial and political—of prosecution mounted. Washington gradually lost interest. Denied the funds and military support he needed, New Orleans-based U.S. Attorney James R. Beckwith valiantly tried to win convictions, but succeeded against only three of the 98 men he indicted. Even that paltry result was overturned by Supreme Court Justice Joseph P. Bradley in mid-1874; his ruling gave a green light to Klan-like groups in Mississippi and South Carolina, which overthrew those states’ pro-civil rights Republican governments in 1875 and 1876, respectively. When the full court upheld Bradley’s ruling in 1876, it dealt a lasting blow to federal law enforcement authority throughout the South.

My goal was to provide the first definitive account of the massacre--from its origins in the antebellum plantation economy of Louisiana’s Red River Valley, to its repercussions in constitutional law today. It is too late to correct a 135-year-old injustice. But I felt an urgent need to correct the record. For the injustice at Colfax was compounded by cover-up. White Louisianans have systematically distorted the event, blaming rampant “Negroes” for provoking their own murders and erecting marble monuments and historical markers in honor of the guilty. This cover-up, unfortunately, was abetted for many years by historians, Northern and Southern, who taught that Reconstruction had collapsed due to its own misguided attempt to include unworthy black men in government. In that sense, I was following the revisionist trail blazed by historians such as John Hope Franklin, Kenneth Stampp, and Eric Foner. Thanks to them, the rights and wrongs of Reconstruction are now more accurately comprehended; the old fable of carpetbaggers and scalawags has lost currency and respectability.

But as I completed the book, I also wondered whether the time has come to take the interpretation of Reconstruction in a new direction. The work of Franklin, Stampp and Foner properly emphasized the political and economic weaknesses of Reconstruction, such as the Radical Republican Congress’s failure to distribute land to Southern blacks, or the Grant Administration’s evolution from a revolutionary force to a patronage machine.

However, Reconstruction not only failed because of such flaws in its design; it failed because it was resisted. It was resisted bitterly in the courts, where Southern lawyers made use of every conceivable cause of action—plausible or not—to tie Republican state governments in knots and to generate favorable propaganda. And it was resisted through cruel but sophisticated paramilitary campaigns, starting with the Ku Klux Klan’s rampage through the southeastern states in the late 1860s and culminating in the Red Shirts’ seizure of power in South Carolina in 1876. Southern litigation and southern terrorism attacked Reconstruction at its weakest points: a post-Civil War constitutional structure whose new rules of state-federal relations were open to judicial interpretation, and a Northern political climate in which sympathy for beleaguered freedmen did not exceed the desire to avoid a new Civil War. The rulings of Justice Bradley and his Supreme Court colleagues reflected Northerners’ interest in an exit from the intractable morass of the South.

For all the savagery they visited upon black freedmen and their white Republican supporters, for all their warfare against Republican-led state militia units, the white Reconstruction-era paramilitaries in Louisiana—as far as I can determine—never killed or wounded a single Federal soldier. Indeed, white supremacist politicians went out of their way to praise U.S. generals in their public statements, even as they may have cursed them in private. The reason was simple: the white supremacists assumed that, as long as they did not actually harm U.S. troops, white Northern public opinion would not support the all-out invasion that could have crushed them. And they were right.

Eventually, the U.S. government retreated from the post-Civil War South just as it would retreat from Vietnam and Somalia a century later—and as it may yet retreat from Iraq. What began as a bold effort at democratization and nation-building ended as a politico-military quagmire. I mean this as a provocative analogy, not an exact one: Washington’s duty to its own citizens, regardless of the cost, was more apparent than its duty to Southeast Asia or Africa. Still, for the idealistic men (and women) who traveled South from New England during and after the Civil War, places such as Coushatta, Louisiana and Vicksburg, Mississippi were almost as alien, culturally, as Mogadishu and Baghdad are to U.S. soldiers and diplomats today.

Surveying the ruins of Reconstruction after he left the White House, Ulysses S. Grant concluded that the South had needed neither home rule nor episodic federal intervention, but benevolent dictatorship. “Looking back, over the whole policy of Reconstruction, it seems to me that the wisest thing would have been to have continued for some time the military rule,” he said. “That would have enabled the Southern people to pull themselves together and repair material losses. Military rule would have been just to all: the Negro who wanted freedom the white man who wanted protection, the Northern man who wanted Union. As state after state showed a willingness to come into the Union, not on their terms but upon ours, I would have admitted them. The trouble about the military rule in the South was that our people did not like it. It was not in accordance with our institutions. I am clear now that it would have been better to have postponed suffrage, reconstruction, State governments, for ten years, and held the South in a territorial condition. But we made our scheme, and must do what we can with it.”

Grant’s analysis—a characteristic mixture of hard-headed militarism and wishful idealism—has its attractions. But, as Grant acknowledged, “our people did not like it.” The white South was firmly united behind “redemption,” while the Republican Party was an agglomeration of industrialists, farmers, Negro freedmen, and Northern-born officeholders in the South. This coalition lacked unity; it lacked conviction; it lacked certitude. And certitude was the one thing the white South had in abundance. The South pushed and pushed on Republican fault lines until they cracked. The Confederate States of America lost the Civil War. But the South won Reconstruction.

The failure of Reconstruction and its resistence is a fascinating and little known part of American history that deserves more analysis. Sounds like an interesting book.

Thus was an American Zimbabwe avoided.