Why It's Time to Give Joseph Kennedy a Break

Dr. Swift, a licensed clinical psychologist and historian, is the author of the newly published book, The Kennedys Amidst The Gathering Storm.

In his magisterial biography Franklin Delano Roosevelt: Champion of Freedom, Conrad Black points out that Joseph P. Kennedy, President Roosevelt’s ambassador to Great Britain from 1938 to 1940 was “ultimately widely reckoned to be one of the worst diplomatic appointments in the history of the United States.” While spending three years studying Joseph Kennedy’s private papers and recently released Kennedy family archives for my book, The Kennedys Amidst The Gathering Storm, I have found evidence that Ambassador Kennedy deserves more credit for his patriotism, dedication, and compassion during a difficult historical pivot point. Reflecting on the often intense conflict between British and American political agendas at the time, playwright Clare Boothe Luce cabled her friend Joe in July 1940: “Confucious say man who get to be American ambassador should make up mind first whether he looks best in pine or mahogany.” 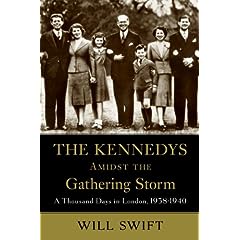 When Kennedy first arrived in London he was celebrated because he represented hopes for Anglo-American unity, but by the time he left after tin the fall of 1940 after three years of service, he had come to symbolize the stinginess and intransigence of an American government unable to offer badly needed weapons and military supplies to Britain fast enough to suit their taste. Joe’s ambassadorship is remembered like a marriage gone bad--mainly for the last deteriorating year when he was angry and depressed after being marginalized and ignored.

But there were in essence three different Kennedy ambassadorships corresponding roughly to the three years he held the post. At least one of them was astonishingly successful. In 1938 he was an ebullient, energetic, creative, and amazingly well-connected envoy providing useful, up-to-date information to the U.S. government. Highly patriotic, Kennedy allied with Chamberlain because his accommodationist policies seemed to offer the best protection for the United States. During 1939 Joe acted as a pro-American nationalist, a disillusioned pacifist and a maverick who would try almost anything to avert war. Kennedy and Chamberlain were passionate advocates of peace, but their willingness to allow Germany to swallow up Czechoslovakia and Austria showed a failure of moral vision. By 1940, once Chamberlain’s negotiations had failed and war had erupted, Kennedy moved painfully but steadily toward advocating limited aid and intervention by the United States. Like the highly protective parent he was, he wanted America to have adequate time to build up its own military arsenal so that she could protect herself on her own terms.

Kennedy has borne more than his share of blame for the souring of his “long distance relationship” with Roosevelt. This partnership was not the great president’s finest hour. Even Roosevelt’s champion Conrad Black acknowledges that Roosevelt was “sadistic” in his treatment of his emissary. During his initial job interview the president humiliated Kennedy by asking him to drop his pants and by teasing about his bowleggedness. FDR continued to humiliate his thin-skinned representative throughout his final two years in London. He asked Kennedy to carry sealed letters to the king and to Churchill without revealing what was in them. He left Kennedy out of many of his negotiations, conducted in Washington, on the destroyers-for-bases and other deals. FDR also sent emissaries to Britain on fact checking missions without even informing Kennedy. Roosevelt erroneously informed the British government that a German invasion would begin on the afternoon of Sept. 22, 1940, but Kennedy only learned about the threat from the British. After the fall of Norway, Roosevelt struggled with his own private pessimism and fears, and he avoided Kennedy partly because he could not handle Joe’s negative feelings.

For his part, Kennedy was highly sensitive to exclusion, stubbornly independent and at times insubordinate: he defied Roosevelt by meeting secretly with German representatives in London. By employing Kennedy’s skills as an able embassy administrator and often useful conveyer of information while leaving him out in the cold as a strategist and negotiator, Roosevelt did his diplomat and his diplomacy a disservice. If he wasn’t willing to rely on Kennedy, he should have found a kind way to reassign him to a post at home.

One of Joe Kennedy’s weaknesses was to see things in black or white and many who have written about him have fallen into the same trap. He has been portrayed at times as a completely self-centered, anti-Semitic, Nazi-loving defeatist. While researching The Kennedys Amidst The Gathering Storm, I discovered that Joe was a more complex and interesting character than I had originally thought. Most historians focus on his ambition, but downplay the strong strand of compassion in his character. Joe Kennedy’s “earthy selfishness and higher loyalties” (in his friend Henry Luce’s apt phrase) were inextricably intertwined.

In a privately printed family tribute to Joe Kennedy, The Fruitful Bough, his son Robert Kennedy wrote, “Beneath it all he has tried to engender a social conscience. There were wrongs which needed attention.” During his ambassadorship to the Court of St. James’s Kennedy did more than any of FDR’s other ambassadors to help Jewish refugees. As vice chairman of the Evian conference of thirty-two nations trying to find homes for German and Austrian Jewish refugees, Joe spoke out in July 1938 at Winchester Cathedral about the refugees’ plight. Challenging Germany he said, “Certain nations have attempted to relieve the suffering of some of their people at the expense of others of their inhabitants.” Joe pointed out that delegates at the Evian Conference were working diligently to develop means “to see that these refugees do not perish cruelly and hopelessly.” He stressed the importance of “tolerance, concern for the underprivileged, [and an] innate sense of fairness.”

In the summer of 1939 when boatloads of desperate refugees were seeking asylum at ports all over the world, Joe Kennedy helped find a safe haven in Britain for three hundred Jewish refugees on the St. Louis after the Cuban government famously refused to honor its pledge to grant them asylum in Havana. When the Nazis agreed to let some Jewish children emigrate in return for some British and Dutch trade concessions, Joe helped arrange for one hundred ninety-six children to come to Britain and an additional thirteen hundred children to be settled in France, Liberia and British and French colonies in Africa. Appalled that there were no Jews on the embassy staff, Joe broke court precedent by insisting that a consular official be the first Jew presented at court.

In the spring of 1939 when Britain changed its Palestine policy to curtail Jewish immigration to Palestine and Jewish rights to purchase land, Joe’s efforts on behalf of the Jews led the Arab National League to denounce him as a “Zionist Charlie McCarthy”-- perhaps a welcome attack for a man used to being called anti-Semitic. When American Zionists spread rumors that Joe was telling British officials to ignore American Jewish outrage about Britain’s new Palestine policy, Joe was extremely upset. Dr. Chaim Weizmann, the leading spokesman for organized Zionism, visited him at the embassy and apologized for the attacks. Kennedy did have a strand of anti-Semitism in him, but it only tended to surface when he felt criticized, misunderstood, or threatened--as when he feared the Jews in America and Europe would urge America into a war it would lose. After all his work on behalf of Jews, Joe was deeply hurt by strong criticism in Jewish circles and this led him to express more pejorative views after he returned home from London.

Joe Kennedy prided himself on being a realist who touted economic incentives as a means for solving international conflicts of interest. He realized that Hitler was a liar and a bully but, unlike Churchill, he failed to grasp Hitler’s ideology of hatred and the absolute evil of Nazism until it was too late. Kennedy’s commitment to public service and peace was undermined by headlong ambition, intemperate behavior, realism unleavened by optimism, and courage unsupported by an articulated moral vision. His ambassadorship is a cautionary tale: it had a glittering launch, but it became the tragic undoing of his career. His isolationism reflected sentiment in the United States until American opinion shifted quickly toward interventionism and he was vilified for being out-of-step with his countrymen.

Kennedy was, however, no unthinking isolationist. In May 1941 at Ogelthorpe University he brilliantly expounded the anti-interventionist position in words that resonate strongly today:

Let us not forget the American destiny; let us not be deluded by any claim that self-interest should make us the guardians of the peace of the rest of the world. I have the fullest conviction that few counties of the earth by and large want our kind of democracy. Most of them have neither the training nor the tradition for it--not even a proper understanding of it. Democracy cannot be imposed by force or otherwise.

In an era when it is clear that hasty interventionism can have disastrous consequences Kennedy's emphasis on economic incentives and negotiations with dictators can be seen in a slightly kinder light. He believed America should arm itself “to the teeth to make clear just exactly how and for what” she should fight. Might he now be remembered a little less as an appeaser, with all the negative connotations that word now carries, and more as someone who explored every reasonable avenue for peace?

"His ambassadorship... became the tragic undoing of his career."

I'm not a student of old Joe's career, but that word "undoing" seems to suggest there was something laudable about him previously, which does not accord with my recollections. I think of him as a bootlegger, a market speculator, and a philandering moviemaker. He had success briefly in running the SEC, yes, but that was because he knew where all the skeletons were buried from his personal experience as one of the Wall Street sharks. It must be that he had some other wonderful career I never heard about in order for his job as Ambassador to England to be construed as its "tragic undoing."