Will the Democrats Blow It (Again)?

Donald Critchlow teaches History at Saint Louis University and is the author of "The Conservative Ascendancy: How the GOP Right Made Political History" (Harvard University Press, 2007). 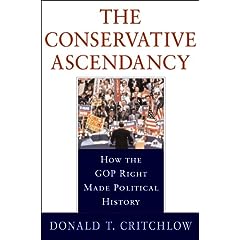 There is good news and bad news for the Democrats this year: The good news is that the conservatives are in disarray. (So much so that recently Boston University political scientist Andrew Bacevich, writing in the April 24 issue of The American Conservative, urged conservatives to vote for Barack Obama.)

The bad news is that the Democrats have found themselves in a circular firing squad as Barack Obama and Hillary Clinton have unloaded on one another. What is bad news for the Democrats, however, might just prove to be good news for GOP conservatives, especially if history repeats itself. Every time the GOP Right has appeared to be down and out for the count, the Democratic left has allowed them to get off the canvas and go on for another round.

Put more directly, the conservative ascendancy has been as much a story of miscalculation by the left than political cunning on part of the right. The history of American politics the last fifty years is replete with this lesson.

Barry Goldwater’s defeat in 1964 marked a moment in which American political history might have taken a different turn. Following the Goldwater defeat, conservatives were purged from party ranks, but the mayhem of the 1960s—urban riots, student protests, and the War in Vietnam--called into public doubt Lyndon Johnson’s Great Society. Within four years of the most devastating defeat of the Republican party in post-World War II history, a defeat which portended the end of conservatism as a major political force, the GOP was on the march.

Richard Nixon rallied the right-wing of his party to win the nomination in 1968. Once in office, however, Nixon turned his back on the conservative wing of his party. While Nixon was not a liberal, he expanded the welfare and regulatory state, played both sides of the race issue, and pursued a policy of détente with the Soviet Union and open relations with mainland China.

McGovern’s nomination in 1972 reflected the breakup of the New Deal political coalition of urban northern voters and Southern whites. In its place, McGovern New Politics Democrats sought to bring new voters into the party—the young, antiwar activists, feminists, and others seeking expanded civil rights and social justice. The strategy was more intuitive that well-developed. And, there was often ambivalence and reluctance in integrating women and gays into positions of power within the McGovern campaign.

McGovern’s campaign for the presidency was aided by a serendipitous turn of events in 1968 when Democratic party regulars voted to form a commission on Party Structure and Delegate Selection. Before party regulars realized what had happened, the McGovern forces, joined by feminists within the National Organization for Women and the National Women’s Political Caucus, had seized control of the party.

Under the old system of delegate selection, McGovern could never have won the party’s nomination in 1972. Under the new reformed institutional arrangements, he won the nomination. In his campaign for the nomination, McGovern rallied activists to his campaign through a single demand: End the war in Vietnam Now! Only as a kind of afterthought would McGovern issue position papers on the economy, tax reform, welfare, and the budget. His positions were ill-considered and came under fierce attack by his Democratic opponents in the primaries, but they followed him into the general campaign.

The rules changes for delegate selection had long term consequences for the Democratic party. While operating under the guise of democratic reform, the end result was that a new political elite of activists replaced the old political elite of party bosses, labor unions officials, and office holders. The new elites differed—as another political scientist Byron Shafer tells us—in “social background, political experience and policy preference” than the coalition which had previously dominated the national Democratic party.

Nixon easily won reelection in 1972, only to be forced from office in August 1974 because of the Watergate scandal. The scandal left Republicans demoralized and conservatives isolated. Less than 20 percent of the electorate in 1974 declared itself Republican and many thought the Republican Party might be going the way of the Whig Party. Conservatives within the GOP stood as a minority within a very minority party.

Following Richard Nixon’s resignation from office, Gerald Ford stepped into the White House, an accident of politics. His continued support of Nixon’s domestic policies and his pursuit of détente with the Soviet Union ignited a backlash within the Republican party. Ronald Reagan, the former governor of California and a star of the GOP Right, challenged Ford for the Republican nomination in 1976. After a bitter contest, Ford narrowly won the nomination, arguably saving Reagan’s political career, allowing him to win election in 1980.

Instead, Americans in 1976 elected centrist Democrat Jimmy Carter to the White House, but runaway inflation, oil shortages, and a crisis in Iran left the administration paralyzed. Equally important, the Democratic left broke with Carter over his domestic policies, his waffling on abortion, his appearance of not doing enough for women in their struggle to ratify the Equal Rights Amendment, and his get tough foreign policy after the Soviet invasion of Afghanistan.

This fissure provided an opportunity for Senator Edward Kennedy (D-Massachusetts) to challenge Carter in the Democratic Party primaries in 1980. Carter won the Democratic nomination after a long and strenuous contest that lasted until the end of the primaries, but the party remained severely divided. This division was all too evident when the National Organization of Women refused to endorse Carter. A Kennedy top aide, Arthur M. Schlesinger, Jr., quietly voted for the third-party candidate, the liberal Republican John Anderson.

Meanwhile, conservatives seized upon social issues such as abortion, gender-equality, and gay rights to build a powerful, well-organized faction within the GOP. Ronald Reagan’s election in 1980 marked a victory for conservatives. Conservatism appeared to have triumphed, although Democrats did maintain control of Congress for much of the 1980s, and the nation was left with huge deficits after Reagan left office. Reagan’s successor George H. W. Bush (1989-1992) repudiated Reagan conservatism, leaving the conservative victory short-lived.

A personal scandal involving Clinton allowed Republicans to introduce the issue of personal character and public morality into the 2000 presidential election, an election that in the opinion of most neutral observers should have been won by the Democratic candidate given the state of the economy, consumer confidence, and an incumbent party.

Time and again Democrats failed to take advantage of the opportunities presented to them and allowed the GOP right to rebound. As a result the right was able to rebound from defeat to move forward with its political program.

The left will rejoice in an Obama nomination, but his victory might just provide the smelling salts for the right to get to its feet, just when everyone was counting them out.

Dear Bryan, You seem to have missed the fact that Professor Critchlow is a conservative.

The implication of this essay seems to be that it would be a good thing if somehow all those pesky conservatives could just be removed from the planet. I would submit that its not the left giving breathing space to conservatives over and over again - the whole issue has to do with liberalism itself. Every time that liberals (and I'm talking about the kind of kookism being proposed by today's Democrat Party - who would consider JFK to be some sort of tax-cutting, military-loving, right-winger) get to be in charge and start implementing all their lovely socialist policies America recoils in horror. Its built right in to the ideas of the policies that they propose.

1. Man-Made global warming? Well, let's tax all carbon emissions. Except when people actually realize what they would cost them in terms of heating their homes and driving their cars they tend to get outraged. This is one of the reasons that the Clinton Cabal took this issue off the table almost immediately after taking power. Does that mean it was a win for conservatives? Or does it just prove that progressives have no problem with taxing people to death and they resent it?

2. Immigration Reform. Since two previous rounds have convinced the American public that the promise to "clean up the immigration mess" means give amnesty to all the current law-breakers and don't do anything about the new ones - they know that the progressives who bloviate about fairness and so forth are lying. And when 6 Senators and some re-conquistas get together to put out yet another pile of garbage they rise up to stop it. Is this "progressive lack of follow through"? Or another example of Americans finally understanding the implications of progressive thought?

I could give some more examples - gun control, proposed transfer of soverignty to "world" government - but I think that this utopian world with no conservatives would never happen. Unless you kill everybody on the planet except the last liberal. Then he could tax himself to prosperity.

The prime reason Democrats will blow it is because they are not sincere. Obama was caught talking down religion and guns in San Francisco just a few days after his unctious speech about how the important thing to remember about M. L. King was his religious faith... Both Clinton and Obama have been caught in lies about opposing free trade. Both are now back-peddling on an early exit from Iraq. It looks like the Democrats are nominating a weird candidate who doesn't love America and has little in common with the voters. Since he happens to be typical of many Democratic activists, they are hoist with their own petard. And it is this way every four years. The Democrats cannot say what they honestly believe and get elected; the Republicans can.