How Americans in the Civil War Dealt with Death: One Historian's View

Mr. Schantz is the author of the just published book, Awaiting the Heavenly Country: The Civil War and America's Culture of Death (Cornell University Press, May 2008).

Awaiting the Heavenly Country: The Civil War and America’s Culture of Death takes a fresh look at some old historical questions: Why did so many men—some 620,000—perish in the American Civil War? And how were Americans able to sustain and to comprehend the war in light of those astonishingly high losses? At its core, this book argues that cultural understandings of death and dying in antebellum America shaped in profound ways our willingness to make a war of catastrophic proportions. 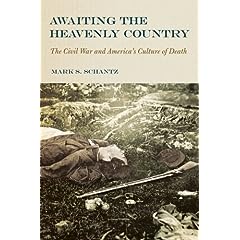 It is not that the traditional explanations for the carnage of the Civil War are wrong. Far from it. Trench warfare and the rifled musket, for example, introduced new and more effective means of killing that Civil War generals—trained as they were in the school of Napoleonic tactics—failed to appreciate. Disease, too, played havoc with the armies. In an age before the “germ theory” was appreciated, Civil War soldiers suffered at the hands of surgeons and doctors whose treatment protocols were essentially medieval. And, the deeply held political convictions held by the sides embroiled in the conflict also contributed to the slaughter. As James M. McPherson has eloquently maintained, all combatants in the conflict cherished deeply held notions of freedom. White Southerners fought to establish their independence from a national political polity now in the hands of “Black Republicans.” The North fought at first to stem what Lincoln had called the “anarchy” of secession and then to remake a Union free from slavery. African-Americans saw in the war an opportunity to claim it as the chance to strike the blow that would set them free. As W. E. B. Du Bois grimly observed in the 1930s, it took the willingness of black men to kill and to be killed with the demoniacal zeal of white men for them to be treated as brothers in the republic.

But we must do more than reckon the cost of the war as a matter of bungling commanders, sinister microbes, or political convictions. War is, in the final analysis, about killing; about making death. And if Civil War soldiers recited the mantra “death before dishonor” with chilling frequency, then we must not only understand what they meant by honor, we must also wrestle with what they meant when they spoke of death. Americans of the antebellum era were well acquainted with death—both as a matter of demographics (average life expectancy was about forty years of age) and as matter of deep cultural reflection, evident in discourses on heaven, the emergence of the rural cemetery movement, in poetry and in literature, and in the arts. Americans brought to the Civil War a rich and sophisticated culture of death that made it both easier to kill and to be killed.

Awaiting the Heavenly Country might be thought of as a book that attempts to bring the interests and insights of the “new cultural history” to bear on what has been a question typically reserved for political and military historians. It seeks to bridge the gap between culture and behavior, showing how attitudes or mentalities (to invoke the work of the French historian Philippe Aries) could have facilitated action in the political and military arena. It has one foot in a deep body of scholarship on the history of death in the West and another foot firmly planted in the ground of the sectional conflict in antebellum America. In straddling these scholarly worlds, Awaiting the Heavenly Country shares much with Drew Gilpin Faust’s new volume, This Republic of Suffering: Death and the American Civil War. Faust’s volume and mine might well be read as companion volumes, sometimes covering similar topics and sometimes offering divergent interpretations. Perhaps one substantive difference is chronological—with Faust’s volume considering more closely, and brilliantly, the wartime encounter with death and how it shaped a new understanding of the Republic and mine trying to probe the cultural forces that preceded the war and facilitated its destructiveness.

The book also says something about the distance—both chronological and cultural—that separates us from our nineteenth-century ancestors. It reveals to us a culture whose embrace of death was more direct, more intense, and more pervasive than ours. It directs us to a world in which Pickering Dodge of Salem, Massachusetts could inscribe a book of 185 poems in commemoration of the death of an infant son and present it to his wife. It puts before us the Rev. John Roberts of South Carolina who exclaimed to the Charleston Baptist Association in 1809 that “the heavenly country is infinitely better than any earthly country.” It invites us to stroll with jurist Joseph Story into the Mount Auburn Cemetery in order to savor the joys of reflecting with “melancholy pleasure” on the departed heroes of past generations. It introduces us to Jane Tayloe Worthington, one of the South’s leading poets of death, and the tribute volume of the Southern Literary Messenger dedicated in her honor. It takes us into the imaginations of African Americans, free and enslaved alike, who became convinced, in the words of the preacher Henry Highland Garnet that it was better “to die free, than to live slaves.” And it explores the rich artistic embrace of death in the nineteenth-century, particularly the rise of post-mortem photography and how that tradition manifested itself in Alexander Gardner’s 1866 classic Photographic Sketchbook of the Civil War. All of this evidence points toward the conclusion that the generation of Americans who fought the Civil War came to that conflict with rich cultural understandings of death that helped to make this conflict the bloodiest in our history.