Reckoning with the “N” Word

Mr. Ward is the author of Our Bones Are Scattered: The Cawnpore Massacres in the Indian Mutiny of 1857 (Henry Holt); Dark Midnight When I Rise: The story of the Fisk Jubilee Singers (Farrar Straus & Giroux); River Run Red: The Fort Pillow Massacre in the American Civil War (Viking Penguin);and The Slaves’ War: Former Slaves Tell the Story of the Civil War (Houghton Mifflin Harcourt).

Over the course of writing three books about 19th century African American history, I have wrestled with the problem of what has come to be called the “N” word. It pops up in so many black and white 19th century sources that any historian bellying up to such material has to reckon with it, one way or another. 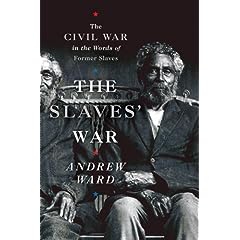 My latest book, The Slaves’ War, contains many quotations from the Work Progress Administration’s (WPA) interviews with former slaves, in which the word in question appears frequently. Many of the stories they tell are horrifying, and I did nothing to weaken them. But in the end I did bowdlerize their quotations in one respect, and that was by eliminating the “N-word.”

The word appears in grim profusion throughout the sources upon which I have drawn. But the following exchange will, I hope, help to demonstrate why I have chosen to eliminate it.

“We are niggers,” she protested. “We always was niggers, and we always shall be. Nigger here, and nigger there. Nigger do this, and nigger do that. We’ve got no souls. We’s animals. We’s black, and so is the Evil One.”

“You don’t know that,” said Chase.

But the Bible doesn’t say that the devil is black, Chase persisted. “Well,” the old woman replied, “white folks say so, and we’s bound to believe them, cause we’s nothing but animals and niggers. Yes, we’s niggers! Niggers! Niggers!”1

The preceding may be more than any historian should have to endure, but it bears witness to the word’s corrosive effect not only on the people to whom it was applied but on the reader as well.

Sparing a reader’s sensibilities is not the entire reason I decided to eliminate it, however. My decision also derived from my frustration in trying to puzzle out its use as recorded by the subjects’ amanuenses. It is often impossible to determine whether a former slave employed the word in its derogatory sense, or whether as a more neutral variation on the word “Negro.” In fact it is sometimes hard to judge whether they employed it at all, or whether it was introduced by their interviewers and their editors as part of their attempt to render all African-American testimony in “Negro Dialect.”

“The situation is always delicate,” wrote an Arkansas interviewer. “Somehow both interviewer and interviewee avoid the ugly word whenever possible. The skillful interviewer can generally manage to pass it by completely, as well as any variant of the word negro. The informant is usually less squeamish. ‘Black folks,’ ‘colored folks,’ ‘black people,’ ‘Master's people,’ ‘us’ are all encountered frequently.”2

Though I retained every subject’s idiomatic grammar and vocabulary, I had already decided to rid my transcriptions of such gratuitous “Darktown” touches as “dem,” “dat,” “whut,” etc. Though eliminating the “N” word as well may to some degree blunt the interviewees’ representations of the acts of verbal and psychological violence that slaves suffered, I found that omitting it removed one more layer of fog, one more level of static, through which we must look and listen to the world of the former slave.

And so, in the name of shedding more light than heat, and in consideration of those readers who cannot read when they see red, I eliminated the “N” word from The Slaves’ War.

1 Lucy Chase in Swift, Dear Ones at Home: Letters from Contraband Camps, p. 189.

No matter how often it is used if I a white male use it in any context or way I run the risk of being accused of racism and even bodily harm so I refrain in most cases unless I use quotation marks and other racial epithets in relation to the subject of false specieation and its concomintant racism. Which is the only context I would find a need to use it.

Otherwise I find reasons not to use it. And am uncomfortable with those who use it in common speech. Even as a proprietary form of address in some subcultural circles.

No-one who has read the excoriating contents of The Slaves' War has accused me of whitewashing history. The material I used had already been painted over with falsely rendered racist transcriptions. What engaged me was not how the WPA's editors thought they should conform to the racist conventions of the day (several books have already addressed that subject), but what they said. Either way, there's a trade-off, but no-one I have read who has studied the WPA transcriptions vouches for the accuracy of their renditions of black speech.

Dealing with the N-word by eliminating it from historical documents is an outrageous disservice to history and to the canons of documentary editing. It's like calling slave quarters "servants houses" the way they used to
on tours of Mount Vernon and other plantations. I suppose you could argue that the tour guides didn't want to make anyone uncomfortable. How can we study racism if we whitewash it first?

The problem is that the transcriptions in the WPA don't "let the speakers speak in their own voice." I think I must have failed to emphasize the principle reason I eliminated "nigger" from The Slaves' War. I did so not to patronize and infantilize my readers but to avoid patronizing and infantilizing my sources. The otherwise laudable WPA project had a serious flaw: in many states editors insisted that all transcriptions be rendered in "Darktown" dialect. This policy extended even to the interviews with highly educated former slaves whom the interviewers themselves described as speaking "proper" English. Thus "Negro" and "Nigra" were in many cases changed to "Nigger" and even "Darkie." I therefore decided to err on the side of its exclusion. That eliminating it helped to turn down the static somewhat was not my purpose but a side benefit. I doubt if any truly "fragile" reader will get very far into my book, with its unblinking eyewitness depictions of the horrors of slavery and the war.

You seem to feel that because black kids in 2001 use "nigger" among themselves I should feel free to employ it in my book. Doesn't this suggest that you are prescribing just what you are criticizing me for: imposing today's standards on these early 20th century sources? I eliminated the word not in order to spare anyone's feelings but because I could not rely on the accuracy of its use in the original transcriptions (as per my response to Mr. Nolan.) In any case, I lay my cards on the table in the author's note, and very much doubt if any reader of the searing accounts of war and slavery in The Slaves' War will feel as though they are being treated like children.

Congratulations on treating your readers like they are in elementary school. I think most of us who would read your book can take the N word, even those of us who are white. That word, or rather its 21st century, hip-hop morph, "nigga," is heard all over the streets here in NYC. It is also used by blacks, Hispanics, Asians, and yes, even white kids.

I guess while you were in school you never had a history teacher tell you, at the bachelor level, to not look at history through a modern day prism.

The word is here now, still used an awful lot by blacks, and until the last 20 years you could still hear it in broadcast television (Sanford and Son, The Jefferson's, both come to mind; don't even mention cable shows like HBO's "The Wire.") So my advice would be to lose the condescending opprobrium, and not do your readers a disservice by eliminating the word from your primary sources.

I can't say I find your explanations for Bowdlerizing either the N word or other words convincing in any way.

Sparing readers' sensibilities is pretty condescending, isn't it? Doing so assumes that your readers are so fragile that they simply couldn't handle the way other people talked. Do you really think that your readers need to be protected?

The other explanation, that readers should be aware of context and meaning, would certainly justify an introduction or appropriate notes, but how does that justify changing the actual words? Explain the context, explain the meaning, but let the speakers speak in their own voice.