A Passion for Overcoming Injustice Has Seized Americans Once Again

Mr. Moss is a professor of history at Eastern Michigan University. His most recent books are A History of Russia. 2 vols. (2d ed., 2003-2005) and An Age of Progress?: Clashing Twentieth-Century Global Forces (2008), both works published by Anthem Press (London). 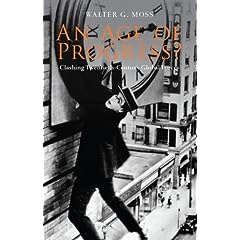 Much passion and intolerance have been displayed so far this election year. Given that the two leading Democratic candidates were often identified as “a black man and a white woman,” it is perhaps not surprising that we have witnessed racist and sexist attitudes and remarks. We have also observed religious intolerance as people have stated that they would not vote for a Mormon (Mitt Romney), or who opposed Barack Obama because they mistakenly believed he was a Muslim. As Bob Herbert wrote in the New York Times on the day of the last Democratic primaries, “the Clinton and Obama partisans spent months fighting bitterly on the toxic terrain of misogyny, racism and religion.” In recent past presidential campaigns intolerance has also been exhibited on both sides of the “cultural wars,” pitting conservatives against those labeled “progressives,” and may again intensify as we get nearer to the November election. The recent book Why the Clustering of Like-Minded America Is Tearing Us Apart maintains that we are increasingly isolating ourselves from those who think differently than us and suggests it is contributing to increasing narrow-mindedness. Tolerance or intolerance toward other nations, people, and cultures may also affect how people judge the foreign policy debate that has already begun between John McCain and Obama.

The twentieth century provided many examples of the terribly destructive effects of racism and intolerance toward other peoples, nations, and cultures. We need only recall the imperialism of the century, the passionate nationalism that helped cause World War I and the Armenian genocide, the racism and nationalism of Hitler that helped lead to World War II and the Holocaust, and the senseless slaughter of hundreds of thousands of people in the 1990s ethnic conflicts in Bosnia and Rwanda. In his novel The Moor’s Last Sigh (1997), Salman Rushdie captures the folly of extreme intolerance that sometimes occurred in his native India: “In Punjab, Assam, Kashmir, Meerut--in Delhi, in Calcutta--from time to time they slit their neighbors’ throats. . . . They killed you for being circumcised and they killed you because your foreskins had been left on. Long hair got you murdered and haircuts too; light skin flayed dark skin and if you spoke the wrong language you could lose your twisted tongue.”

Although we often associate such bigotry with ignorance, the most educated people can also be intolerant. And passionate advocates of just causes like overcoming discrimination can also sometimes cross the line and become intolerant of those thought to be blocking the way to equality. Many of us admire passionate crusaders for equal rights like Martin Luther King Jr., and I am proud to have participated in the civil rights struggles of the 1960s that he did so much to champion. Also admirable are the efforts of so many of Hillary Clinton’s older supporters who battled for decades in support of greater women’s rights. Without the passionate crusading of people like King and advocates of equal rights for women the emergence of Obama and Clinton as the two leading Democratic candidates would hardly have been possible. But two individuals inspired by King and passionate advocates of equal rights and opportunities for African Americans, the Rev. Jeremiah Wright and Rev. Michael Pfleger, crossed over on occasion into intolerant terrain during the Democratic primaries. Their behavior compelled Obama, who ran as a candidate who could unite people, to criticize their behavior and cease attending the church where Wright had been a pastor and Pfleger had given a sermon.

During the past century others acted in inspirational ways to overcome other types of injustice. Before World War I many people became socialists because of their passion to overcome the great economic and social injustices of the time. One example was Carl Sandburg, who later won Pulitzer prizes for both history (his multi-volume Lincoln biography) and poetry. Before WWI, however, he became an organizer for the Social-Democratic Party of Wisconsin, campaigned for Socialist presidential candidate Eugene V. Debs, and in 1910 became the personal secretary of the Social Democratic mayor of Milwaukee, Ernie Seidel. In a 1908 essay “You and Your Job,” he wrote,  “I say  that  a system  such  as the capitalist  system,  putting  such  obstacles  as  starvation,  underfeeding,  overwork,  bad housing,  and  perpetual  uncertainty  of work  in the  lives  of human  beings,  is a pitiless,  ignorant,  blind,  reckless,  cruel  mockery  of  a system.” And he declared, “One reason I’m a Socialist is because the socialists were the first to fight to abolish child labor, and today the Socialist party is the only one that has dared to declare in its platform that it is unalterably opposed to child labor, and that it will do all in its power to remove all conditions that make it possible for human beings anywhere to be underfed and overworked . . . . The true Socialist . . . sees a war going on between two classes, the capitalist class and the working class.”

Carried too far, however, such passion could foster a climate of intolerance that dehumanized those thought guilty of perpetrating injustice. Lenin, Stalin, Mao Zedong, and Pol Pot all argued that the class-based societies their communism replaced were responsible for all sorts of evils, including many that caused countless suffering and early deaths from such causes as poverty and malnutrition. Confident that their Marxist vision presented the key to a better future, the most extreme communist leaders mentioned above encouraged their followers to be ruthless toward the upper classes. During the Russian civil war of 1918-1920 merely looking like a burzhui (a term of abuse for the bourgeoisie) could get you shot. Fashionable clothing, glasses, clean fingernails, and uncalloused hands, all might get you killed.

Like the passion for overcoming class injustices, that for overcoming gender discrimination has also sometimes crossed the line and lead to intolerance of those thought to be perpetrating such unfairness. One person making such a charge was Doris Lessing, whose early novels, especially The Golden Notebook (1962), were praised by many feminists. However, in 2001 she said, "I find myself increasingly shocked at the unthinking and automatic rubbishing of men that is now so part of our culture that it is hardly even noticed." In her 2002 novel, The Sweetest Dream, set mainly in England during the 1960s, she was critical not only of communists but also of feminists whose passions sometimes led them to an intolerance of their own. She wrote that “some people have come to think that our . . . greatest need is to have something or somebody to hate. For decades the upper classes, the middle class, had fulfilled this useful function earning (in communist countries) death, torture, and imprisonment . . . . But now this creed showed signs of wearing thin. The new enemy, men, was even more useful, since it encompassed half the human race. From one end of the world to the other, women were sitting in judgment on men.” Although her words were criticized by many feminists as being harsh and unfair, there was no doubt that in gender politics, like in other types of identity politics, the danger of passion engendering some intolerance of its own existed.

In his recent book Identity and Violence (2006), the Nobel-Prize winning economist Amartya Sen takes a global approach to the relationship of identity, politics, and intolerance. He observes how people have often identified with “the illusion of a unique and choiceless identity” such as nationality, race, or class and insists that a good deal of this past century’s violence flowed from this illusion. He adds that “the art of constructing hatred takes the form of invoking the magical power of some allegedly predominant identity that drowns other affiliations and in a conveniently bellicose form can also overpower any human sympathy or natural kindness that we may normally have.” As a way of overcoming various types of bigotry, he recommends the realization that people possess multiple identities and that it is simplistic and dangerous to put them in little confining categorical boxes marked by race, religion, gender, class, or some other one-dimensional category. When his Identity and Violence was published in 2006, he was a professor at Harvard, but he was also (in his own words) an “Asian, an Indian citizen, a Bengali with Bangladeshi ancestry, an American or British resident, an economist, a dabbler in philosophy, an author, a Sanskritist, a strong believer in secularism and democracy, a man, a feminist, a heterosexual, a defender of gay and lesbian rights, with a nonreligious lifestyle, from a Hindu background.”

Some observers of the current U. S. political scene question whether Obama can successfully foster the type of national unity he advocates between “white and black, Latino and Asian, rich and poor, young and old,” male and female. Exist polls during the primaries indicated that he might even have a tough time uniting Democrats. Many Clinton supporters said they would not support Obama and vice versa. Immediately after the final primaries on June 3, some commentators asked whether the various groups that had earlier supported Clinton would support Obama in the general election or be like the disgruntled Clinton supporter at the May 31 meeting of the Democratic National Committee Rules and Bylaws Committee in Washington, D. C. who yelled “McCain in 08.” Whether or not Obama can be elected and succeed in being the uniter he hopes to be remains to be seen, but the history of the past century indicates the tragic consequences of allowing political divisiveness and identity politics to spill over into intolerance. Certainly, a good deal of Obama’s appeal is the hope he represents, whether well-founded or not, that people can overcome ethnic, racial, class, gender, and other differences and resentments, and work together for the common good.

I only wish and hope that Professor Moss perception of a: "A Passion for Overcoming Injustice Has Seized Americans Once Again " is more than merely hopeful and/or wishful thinking.
That, if true, would be GOOD FOR AMERICA in the first place and, due to its international weight, also GOOD FOR THE WORLD at large.

That could also be inevitable in that the historically “underprivileged”, together with their new counterparts in present day America together with many of the “young” and the increasingly impoverished from the middle class are edging towards becoming a decisive majority and are increasingly conscious of what they can do with that majority !

It is not only that they are becoming more aware of the nature and goals of the self perpetuating and self enriching establishment, with its open door policy to entrepreneurial /meritrotic new blood , that has ruled over them but that, concurrently, they are becoming more resentful of its domination of American politics and American life in general..

It is equally noticeable, and promising for both America and the world, that they have come to perceive most of America’s foreign policy as the other side of that same coin .

They could not go on failing to notice that America’s imperialist wars only served primarily to further enrich the rich among them and thus further entrench the hegemony of the establishment that has ruled over them at a cost that could provide them with better National Heath and Social Security systems.
Nor could they fail to note that a good proportion of the children of that establishment managed, one way or another, to avoid fighting in those imperialist wars in which they, the disadvantaged, fought and died.
Nor could they fail to notice that those same wars springing from that same foreign policy also destroyed the lives of the peoples of many nations of the world particularly in the Middle East, Asia and South America.